In a week juxtaposing a raging pandemic with a violently disputed national election, the prospect of Wagner’s romantic opera Lohengrin seems particularly attractive. Even beyond its eminently hummable music, the work seems to offer a comfortingly clear-cut vision of the triumph of good over evil.

The plot is more or less a fairy tale: the maiden Elsa is on trial for murdering her brother, the heir to the throne of Brabant. A mysterious supernatural knight arrives to defend her, with the condition that she must never ask his name or origin. Exonerated, Elsa agrees to marry the knight, but on their wedding night, she is wracked with doubt, finally asking the question he has forbidden. The knight, Lohengrin by name, leaves her forever but restores her bewitched brother.

Yet there’s a disconcerting aspect to this tale: Elsa’s search for clarity, for understanding of the man she loves, leads to destruction and misery.  In a suitably disturbing new production of the opera from the Berlin State Opera streamed Sunday afternoon, director Calixto Bieito deconstructed the fairy tale to reveal a terrifying parable about the nature of trust.

The action begins in a courtroom improvised from a civic gymnasium, with a human-sized cage for the accused Elsa. The noble King Henry, called on to judge the case, is here a jittery politician so eager to resolve the case quickly he doesn’t even remove his overcoat. Elsa’s accusers include the nondescript but verbose Telramund and his wife, Ortrud, who is mostly silent but seizes attention in an acid chartreuse ruffled blouse, the only splash of color onstage.

The knight Lohengrin makes an understated first entrance, simply appearing among the litigants carrying a delicate origami swan. In his oatmeal-colored sack suit, he looks like a high school teacher at a Sunday picnic. His duel with Telramund consists of no more than a brief staring contest.

In fact, throughout the opera, Lohengrin is a passive and soft figure, mostly standing on the sidelines. Elsa, on the other hand, makes us feel more and more uneasy with increasingly performative antics: swanning around swathed in a voluminous tulle wedding veil and, later, sneaking nibbles of her wedding cake. When Lohengrin reminds her of her vow, she strips down to her underwear and drags the cage behind her toward the altar.

Eventually, I felt like Bieito was deliberately placing us, the audience, in Elsa’s place: just as she comes to doubt Lohengrin, the hero, we are prodded to reject easy answers about the meaning of Lohengrin, the opera. Though the denouement is not as extravagant as that devised by Hans Neuenfels (who brought back Elsa’s brother as a half-developed fetus), Bieito’s take is in some ways more disturbing. We are left wondering if, as the “villains” testified, Elsa indeed did try to drown her brother.

And so the opera, with its themes of faith and trust, is here used to make us question those very ideals. It’s a dark and pessimistic view, but one that is entirely consonant with the terrifyingly ambiguous world we’re currently living in.

So powerful a performance is astonishing under the circumstances: as Germany is closing its theaters again in response to COVID-19, the production was presented for one performance only without any audience. Moreover, the two leading performers were singing their roles for the first time ever. Soprano Vida Miknevičiūtė revealed a bright, shimmering voice with an exciting bite on top notes as Elsa and veteran tenor Roberto Alagna took on his first Wagner role with panache and vocal refinement.

Perhaps most remarkable of all is how Alagna fit into Bieito’s conception. The tenor is usually romantic and fiery on stage, whatever the role, but here he seemed to recede. Even Lohengrin’s great solo “Höchstes Vertraun,” in which the knight reminds Elsa of how much she should be grateful for his rescue of her, took on an unexpectedly sinister interpretation. The hero sounded pompous and self-pitying as he mansplained; meanwhile, Miknevičiūtė glared resentfully.

The immaculate playing of the State Opera orchestra and, in particular, the lively and propulsive conducting of Matthias Pintscher, would sound world-class at the best of times. Under the current adverse conditions, their music making was simply a miracle. 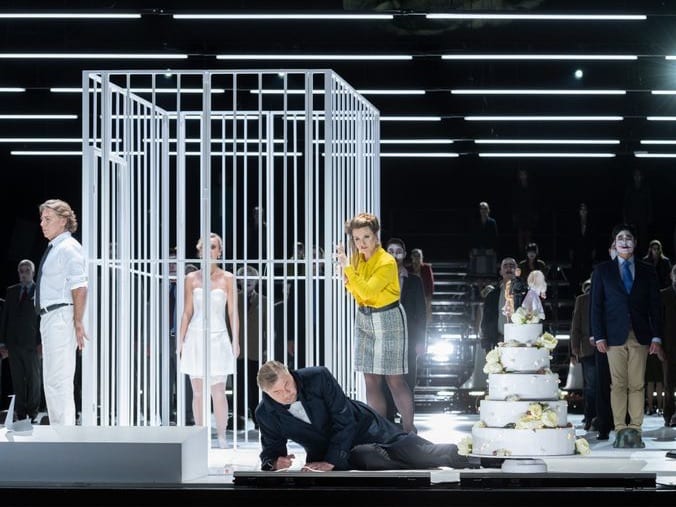