For the past near-decade, Madison Hamburg has been secretly making a documentary with his family about the trauma they experienced in the wake of his mother’s murder. In 2010, Barbara Beach Hamburg was found bludgeoned in her yard next to the golf course in Madison, Connecticut.

“When my mom died, I didn’t tell anybody,” says Hamburg. “I had this shame around telling someone that my mom had been murdered.”

HBO’s four-part documentary series Murder on Middle Beach, which premiered on HBO on November 15 and is available to stream on HBO Max, is Hamburg’s first major project as a filmmaker. It’s a fraught and complicated journey following Hamburg as he tries to find answers surrounding his mother’s brutal murder while also absolving the people he loves and mending a fractured community.

Hamburg began his work on the story as a student at the Savannah College of Art and Design and has since dedicated himself to exploring the complexities of family secrets through documentary filmmaking—a much more expositive task than, say, therapy. For better or worse, it has turned into riveting television and a docuseries that gives the true crime genre a new spin into ethically ambiguous territory.

“Once I partnered with HBO last year,” says Hamburg, “I realized that this was going to be a really public thing and that the documentary at some point had to ask questions [beyond just about my mother’s murder]. Otherwise it wouldn’t accomplish that goal of subverting those conventions.”

Hamburg opened up the fourth wall and took his cue from an editor who worked on Minding the Gap, the 2018 documentary about skateboarders. His advice was to invite the audience into everything Hamburg was going through, because it would be the most honest way to tell a story full of dishonesties, twists, turns and many unanswered questions.

“If I tried to tell it like it’s in the past or tried to distort what’s going on or say that I think this person did it and here’s why,” he says, “I’m going to lose the trust of the audience. “I really wanted it to be from my perspective as much as possible.”

It turns out that Hamburg’s keeping the secret of his mom’s murder and the making of this documentary from even his friends for this long has worked in the show’s favor. It never defined him—“I didn’t have to walk around with the label of the kid whose mom was murdered me”—and now people will see the story unfold almost as its unfolding for Hamburg himself.

“I feel like it’s my chance to define it,” says Hamburg, “and also to be whole again, to stop living this double life.”

Observer went deeper with Hamburg in an interview to find out how his family has been now that most of the episodes have aired, how his aunt Conway Beach (who discovered Barbara’s body and was at the center of the third episode, “Sisters”) has responded to the series and how he was legally able to use all those secret recordings with his father and the Madison Police Department.

Observer: First, I want to ask, genuinely, how are you?
Madison Hamburg: Lately, I’ve been relieved. There’s been a lot of good news and response to the story. The biggest challenge I’ve dealt with and had to ask myself throughout the making of this is whether I’m doing good. These are family members, this is my life, this is my mother’s story, and it’s airing publicly, exposing vulnerabilities. There’s no way around that.

Do you have that answer now? Is it good that you did this?
I think what weighed on me was that I am not the gauger of that. A big part of that was seeing how my family was going to react to how they’re portrayed. I had family screenings for all four episodes before they came out, which for me was mandatory, and we had conversations around how they come across, the questions that they are asked and the things that are said about them. All of them are in a good place, outside of my dad. I haven’t talked to my dad in depth about the documentary yet. So, I think what I’m doing is necessary, and I think “good” and “bad” are too binary for how complex humanity is.

What has the progress been like for mending family relations?
Out of anyone, I was most worried about my aunt, Conway, and she’s in a really good place now. With my sister and her, there is a light at the end of the tunnel for their relationship, which I was really concerned about. At the end of day, if I don’t solve this, was I just creating a path of destruction?

Without knowing the laws in particular states about consent to record conversations, how was it that you were able to use all those recorded conversations in the series?
In regard to conversations with my dad, my production team had lengthy discussions about consent states. For the past seven years, all my calls to him have been from one-way consent states. With the police, the legal team at Jigsaw had the recordings legally vetted and made a group decision that it was okay. Mostly it was from a First Amendment rights standpoint. To that point, something I most regret that was left on the cutting room floor was sequence in which I pieced together all the bits of information I’d heard from the police to find out whether or not I was their number one suspect, and if they thought that, did they think I was doing this documentary in an effort to know what they know. We had to cut a lot of stuff for time, but that one really hurt because it felt like an opportunity to show how easy it is to connect the dots through confirmation bias. I was a suspect in their eyes. So, when I would go and talk to them, I was questioned in a way that I felt recording would protect me if those conversations were ever used against me.

Why is it that your dad eventually starts opening up more to you and giving you more information?
I’m not sure that he knew I was still working on the documentary. There was a three-year gap between when I asked him to be a part of the documentary in 2013 to when I reach out and met up with them in New York in 2016. I hadn’t talked to him about anything involving my mom and I waited until I was recording to do so. And I knew that I wanted to ask anyone who’d been named a person of interest point blank if they did it so I could see the response with my own eyes.

** SPOILERS: The following questions contain minor spoilers for “Reasonable Doubts,” the fourth episode of Murder on Middle Beach, which airs on Sunday. Read at your own discretion. **

It’s kind of a small detail, but I noticed that Conway wasn’t at the family get together in episode four. Why is that?
Conway was having really bad anxiety about being around my sister. At that time, there were still lingering questions… See, I didn’t share what relatives told me in interviews with anyone else in the family—I still don’t. It’s a really tough balance being in the position of family member and documentarian—I’m sort of the middleman between all of these things that I’m hearing, much of which never even made it to the documentary. So, when it came time for the reunion at the beginning of episode four, Conway didn’t come because she didn’t want the stress and anxiety of being around the family with cameras.

She definitely seems to get increasingly volatile as the series progresses. Was there something happening behind the scenes that you didn’t get to spend time on in the show?
I think it was a byproduct of the lack of answers for her grief and loss and feeling ignored as time goes by. That was all really hard on Conway, along with the PTSD of finding my mom’s body. It dredged up so much from her past, opened wounds on camera. We have over 200 shooting days and over 1,000 hours of footage. It was really taxing on my family.

Read the second half of this interview: Madison Hamburg on the Next “Chapter” of His Investigation After the Show’s Finale 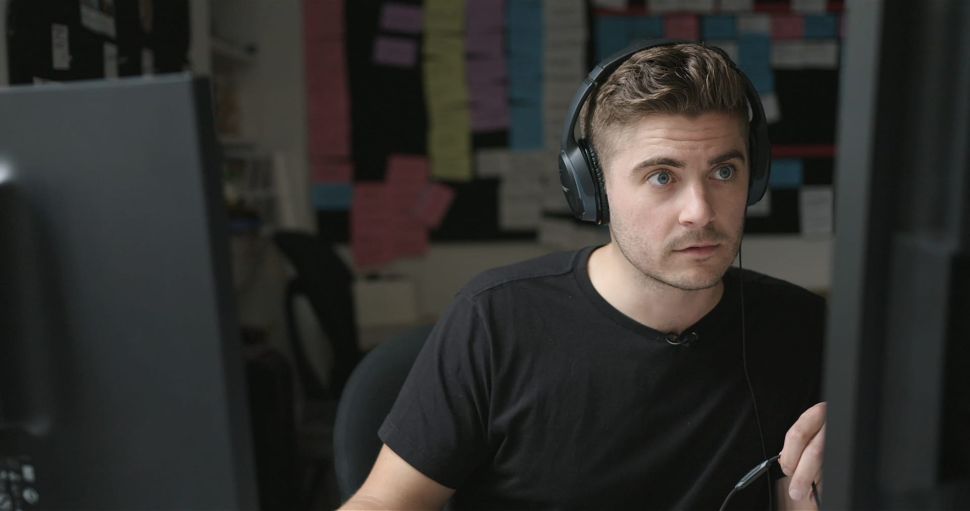