Netflix has enjoyed a banner year thanks in part to the home confinement forced by the coronavirus pandemic. The market-leading streaming service has added more than 30 million new subscribers in 2020 alone and should officially surpass 200 million paying customers worldwide by its next earnings report. But since Netflix’s self-reported viewership data comes without proper background and context and is unverified by outside sources, we can’t trust the streamer’s raucous audience narrative implicitly. That means we have no idea how popular their original titles truly are. So in an effort to unearth a modicum of truth, we’re digging deep to discover the most-watched Netflix originals of 2020.

Buckle up for a lot of numbers.

ANTENNA observes transaction data across several million U.S. consumers (on a strictly anonymous, opt-in basis). Using this data, the company can tell when consumers signed-up, when they cancelled, when they switched services, and so on. According to ANTENNA data provided to Observer that tracks these trends from January 1, 2020 to November 30, 2020, we can begin to see how the ebb and flow of new sign-ups coincides with the release of major original titles. 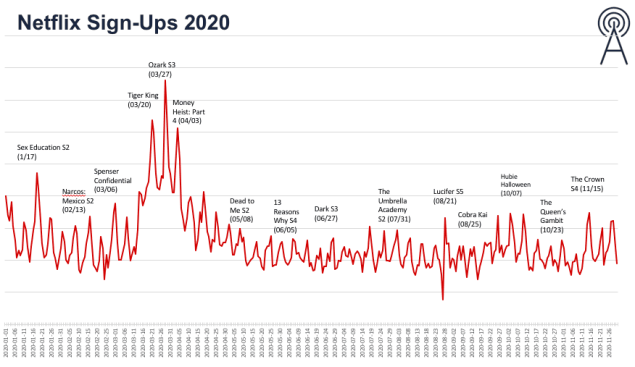 The chart’s most dramatic spike occurs in March, when the COVID-19 pandemic first hit the U.S. There’s no doubt that Netflix and every other major SVOD player benefitted from national stay-at-home orders at the time.

But that March spike also occurred in the same window as major original releases such as the docuseries Tiger King: Murder, Mayhem and Madness (March 20), Season 2 of crime drama Ozark (March 27), and the fourth season of Money Heist (La Casa De Papel) (April 3). Further upward trajectory changes across the rest of the year largely coincide with other major original releases as well such as Season 2 of The Umbrella Academy (July 31), Season 5 of Lucifer (August 21) and Season 4 of The Crown (November 15).

While this doesn’t paint a picture of concrete viewership, it does suggest a direct correlation between sign-ups, churn and highly anticipated Netflix originals, giving us an idea of which series are most in-demand. We can then compare this to our ratings information below.

Data firm Parrot Analytics‘ audience attention measurement system captures an audience behavior dataset. The company sifts through social media, fan ratings and piracy data to represent audience demand, which reflects the desire and engagement expressed for a title within a market (in this case, the U.S.). According to Parrot data provided to Observer, here are the 10 most in-demand Netflix originals in 2020. 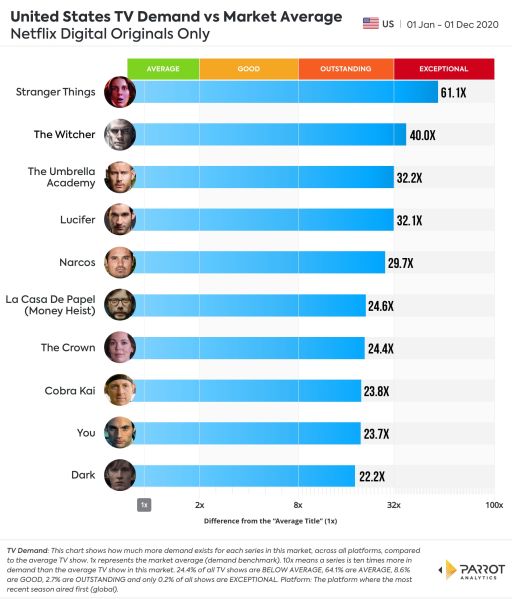 Stranger Things and The Witcher did not air new episodes in 2020. However, both are flagship originals for Netflix. It’s worth noting, though, that in 12 weeks of Nielsen data tracking the top-10 SVOD programs in minutes watched provided to Observer covering August 17 to November 8, neither series made an appearance. But according to Reelgood—a streaming aggregator that tracks every TV show and movie available online for its 3 million U.S. users—both shows were a relatively consistent presence on weekly most-watched Netflix lists dating back to April. 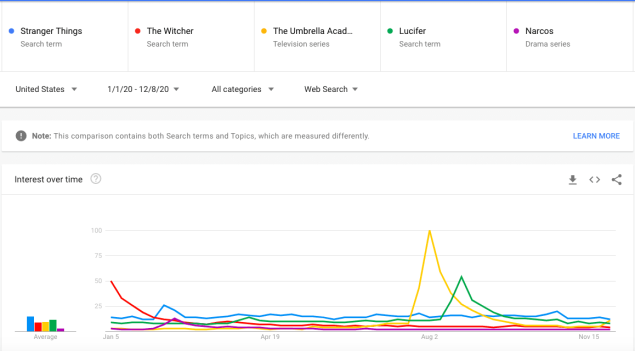 Netflix hasn’t released viewership data for the majority of entrants on this list. But according to most third-party metrics (such as Nielsen and 7Park) and evaluators (such as The Entertainment Strategy Guy), Season 2 of The Umbrella Academy was a massive runaway success. After the debut of Season 5, Lucifer (which began as a Fox series before being rescued by Netflix post-cancellation) spent six straight weeks on Nielsen’s top-10 most-watched SVOD programming in terms of minutes watched and four straight weeks among Reelgood’s top-10 most-watched Netflix TV series.

Cobra Kai was among Reelgood’s top 10 most-watched Netflix shows for eight straight weeks since appearing on Netflix August 25 (it was originally a YouTube original, but Netflix has acquired the series and will release a new season in January). This is supported by Nielsen, which saw Cobra Kai spend five weeks among the top 10 in minutes-watched. In its first month, it drew upwards of 6.2 billion minutes watched, or north of 103 million hours. It seems to have produced a bigger cultural footprint than Narcos (chart above). 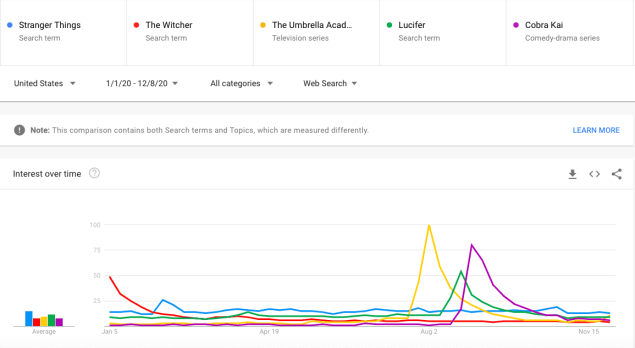 Now, let’s compare Parrot Analytics’ list with the top 21 most-watched Netflix shows of 2020 from WhipMedia’s TV Time. Over their weekly Binge Reports and Shows on the Rise reports, TV Time tracks week-over-week growth in episodes watched for a given program and binge sessions—when four or more episodes of a show are watched and tracked in the TV Time app within a given day—to compile a viewership ranking for the U.S.

Season 2 of You (which began as a Lifetime series before moving to Netflix) drew 54 million member households within its first month, according to Netflix. Viewership for Season 2 of Sex Education has not been made public. Season 3 of Ozark drew 29 million in its first month, though Nielsen pegged the series as a top original performer for Netflix with an average minute audience of 8.7 million viewers over its first 10 days, per Deadline.

Crossover titles between TV Time and Parrot Analytics among their top 10 include The Umbrella Academy, Lucifer and Money Heist (La Casa De Papel). Meanwhile, according to Netflix’s self-reported top 10 lists, the two 2020 titles with the longest reigns at No. 1 this year are Tiger King and The Queen’s Gambit. Per Reelgood, here are the top 10 Netflix original TV shows in 2020 based on the number of times they appeared in Netflix’s own daily top 10 lists for the U.S. from February 27 to December 8.

And here’s how our top five across all three lists—Tiger King, Money Heist, The Umbrella Academy, The Queen’s Gambit—compare on Google Trends search traffic. 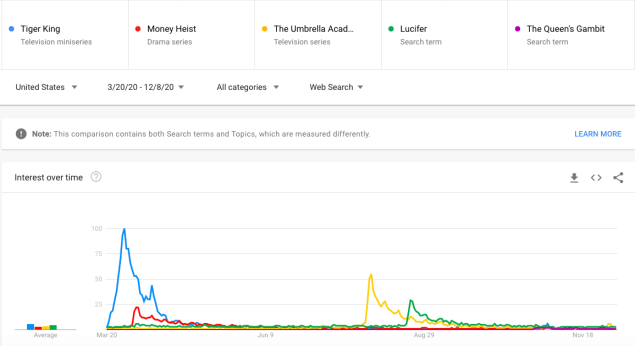 This suggests that Tiger King, The Umbrella Academy and Lucifer generated the most internet interest among this loosely stitched together top five.

But Netflix claims that The Queen’s Gambit recorded 62 million household views within its first 28 days, making that its biggest scripted limited series to date, while Tiger King scored 64 million views. For comparison, 2019’s The Witcher broke out as one of Netflix’s biggest originals ever with 76 million household views (which Netflix counts as any member account that watches at least two minutes) over its first four weeks. Nielsen pegs Tiger King at 34.3 million unique viewers in its first 10 days of release in the U.S.

The Queen’s Gambit has spent three straight weeks on Nielsen’s top 10 with north of 3.8 billion total minutes watched (more than 63 million hours) and remained on Reelgood’s Top 10 since debuting October 23. (Nielsen’s list are four weeks delayed, which is why we don’t have a full month of data on The Queen’s Gambit yet.) But the far less heralded Lucifer generated upwards of 5 billion total minutes watched (or north of 83 million hours) within the first three weeks of Season 5’s availability, per Nielsen data. Then again, it had five seasons of episodes available for consumption, compared to The Queen’s Gambit total of seven episodes.

The German language series Dark, one of this writer’s favorite shows in recent memory, surprisingly made both Parrot Analytics and TV Time’s lists overall after airing its final season in June. The series trended in Reelgood’s Top 10 most-watched Netflix series from its June 19 release through September 30, which seems unusually strong for a non-English series that never popped up on Nielsen’s ratings or made a significant dent in Google Trends. 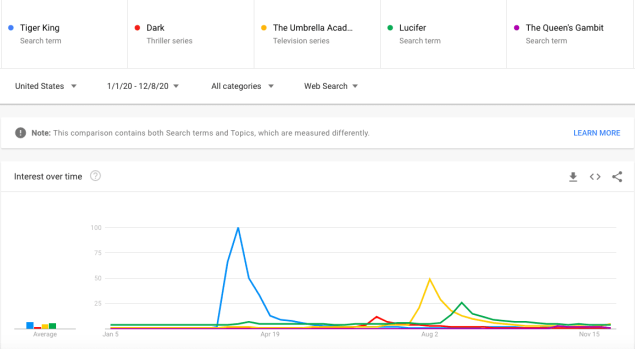 Based on all of our sources—ANTENNA, Nielsen, Reelgood, Parrot Analytics, TV Time, Google Trends, and Netflix’s own self-reported Top 10—we can safely assume that some combination of The Umbrella Academy, Lucifer, Money Heist (La Casa De Papel) and The Queen’s Gambit are among the most-watched 2020 Netflix originals. It’s also likely that The Crown could make its way into that conversation by the end of the year. Also in the mix of this top-tier popularity measurement are Tiger King, You, Cobra Kai, Ozark, Narcos, Outer Banks and perhaps The Haunting of Bly Manor and Dark while mainstay holdovers such as Stranger Things and The Witcher help to anchor Netflix’s library.

Movie Math is an armchair analysis of Hollywood’s strategies for business and new releases. 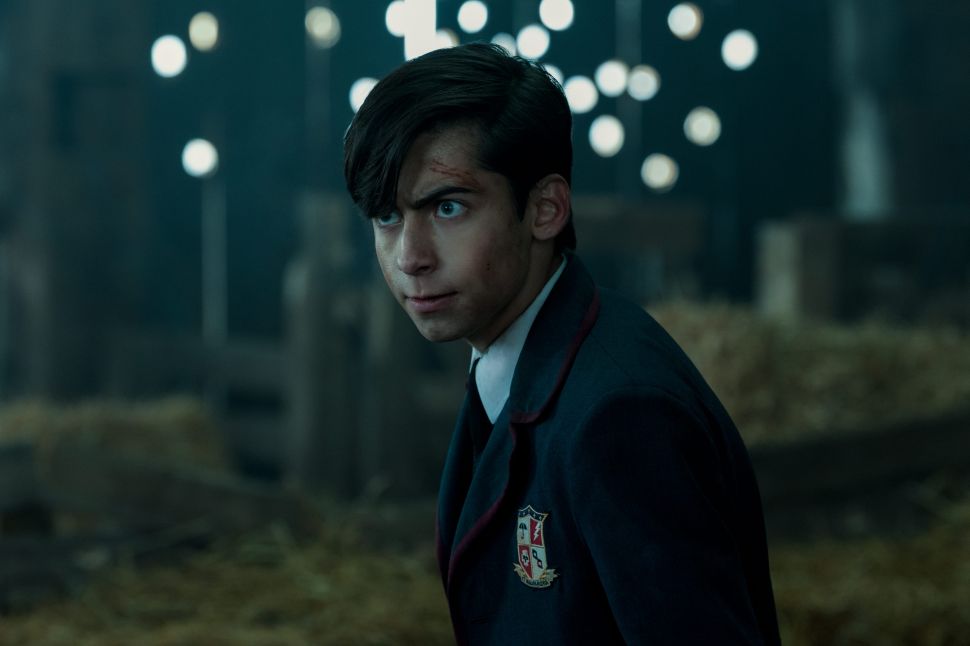