Like last year’s Hustlers, which features a gravity-defying striptease from Jennifer Lopez in the film’s opening minutes, 2020’s stripper series P-Valley focuses on the impressive strength and athleticism of its characters rather than sexualizing them as pop culture in the genre historically has.

The STARZ drama based on the play Pussy Valley by showrunner Katori Hall centers on down on its luck Mississippi Delta strip club The Pynk and the dramas that follow the ragtag group of dancers therein as they try to rise up out of their predicaments.

On P-Valley, The Pynk’s queen bee Mercedes’s (Brandee Evans) strength is paramount from the moment we meet her, stretching her muscles and hanging upside down on a pole backstage practicing her moves.

In the final dance of the first episode—one that rivals J.Lo’s Fiona Apple bump ’n’ grind the music drifts away and all we can hear is Mercedes’s bare skin chafing against metal, grunting and breathing heavy as the camera follows her up the pole. The movement is choreographed by Jamaica Craft and directed by Karena Evans (notably, all episodes were directed by women), and its foreboding atmosphere indicates that she might fall, as many of us would, but the emphasis is on her physical power. Her superhuman core, upper-body and leg strength stop her just before she hits the floor.

P-Valley joins a growing number of pop culture that isn’t just about “strong” women characters in the psychological sense that we’ve come to recognize—emotional intelligence, overcoming the odds etc.—but strong in the physical sense.

On the recently canceled GLOW (RIP), a Netflix series about women wrestlers and based on the 1980s wrestling show of the same name, indicates that physical strength is a key element by virtue of its genre. However, women’s wrestling has often been sexualized, particularly in the era that GLOW covers, with the emphasis being on the way women’s bodies look, not what they can do with them. It is right there in the title, after all: GLOW stands for Gorgeous Ladies of Wrestling.

The show explored this in many ways, from Debbie (Betty Gilpin) reclaiming her body as Liberty Belle, a southern American heroine, after motherhood, to Tammé (real life former wrestler Kia Stevens) struggling with the fallibility of her body, getting hooked on painkillers after a back injury wrestling as Welfare Queen.

“Wrestling isn’t ballet,” is the show’s common refrain. GLOW played with his notion in the third and final season, when the titular gorgeous ladies did a residency in Las Vegas and, in one episode, trained with showgirls and former ballerinas. Debbie’s eating disorder, the injuries experienced by the characters throughout the show, and their proximity to dance illustrate the perception of these vocations as “not serious sports.” The season recalled Netflix documentaries Athlete A and Cheer, which share similar themes of an alignment with femininity, a prevalence of injuries and not being held in high regard.

On the surface, middle school comedy Pen15, on Hulu, might seem out of place in a discussion about physically strong women, but it is yet another series in which its characters, Maya (Maya Erskine) and Anna (Anna Konkle) especially, seek to find autonomy in their rapidly changing and confusing bodies.

In the second episode of its second season, which is wrestling-themed, Anna discovers WWE’s Monday Night Raw and, specifically, Trish Stratus. (Note: If your show does not have a wrestling-themed episode, what are you even doing making television?) This inspires her to join the wrestling team, and boy crazy Maya joins her so she can get physically closer to her crush who is also on the team.

Slut-shamed and bullied for being “ugly,” Maya’s male opponent gets the better of her when he taunts her on the mat with the latest misogynistic taunt thrown her and Anna’s way. I couldn’t help but be reminded of the cognitive dissonance of being a women’s wrestling fan and, indeed, a woman wrestler, in the early-2000s time period in which Pen15 is set. Though women like Trish Stratus frequently tore it up wrestling men, as Maya and Anna do as the only girls on the wrestling team, they were also subjected to on-screen degradation. It’s no surprise that the girls are drawn to Stratus’s sex appeal but fearsome ability to kick ass in the wrestling ring. Anna imagines herself dressed in dominatrix gear and using her tall, thin body—historically a favorable asset in women’s wrestling but which she seeks to bulk up in order to ascend weight classes—to wind her opponents into submission moves. She gains power and autonomy, while also seeing herself in a new way.

The theme of ownership of one’s own body continues throughout the season, with the girls dabbling in witchcraft and theatre in an attempt to gain control while their home and school lives spiral.

With the spate of cancellations of women-led shows, including GLOW, as well as COVID-19 preventing series, especially those that center on physicality, from going back into production, it remains to be seen whether this trend of physically strong women characters will continue. 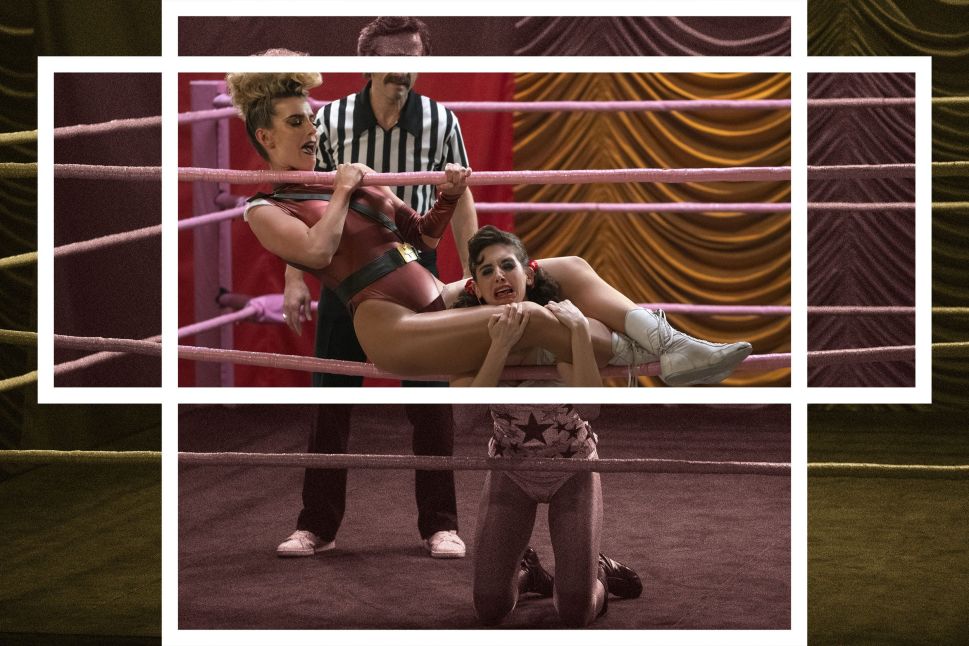