Pixar’s greatest strength is its ability to take complicated emotional and psychological concepts and channel them into adorable animation for kids without ever dumbing down the message. What began as relatively straightforward lessons about friendship, relationships and thinking beyond one’s self as told in Toy Story and A Bug’s Life have become metaphysical meditations on humanity’s deep well of often conflicting emotions and an exploration of the afterlife in Inside Out and Coco. That’s a helluva leap for a children’s animation movie studio. But Soul, directed by Pete Docter (Inside Out) and co-directed by Kemp Powers (One Night in Miami) is the next chapter in Pixar’s journey, a whimsical and poignant metaphor for why we’re all here in the first place.

Like Coco, Soul asks its young audience to confront the real issue of our own mortality. But the question that powers its tale is what happens both before and after our lives here on Earth?

Soul revolves around middle school band teacher Joe Gardner (Jamie Foxx), a frustrated middle-aged pianist with dreams of musical stardom. After years of false starts, he aces a jazz band audition only to fall through a manhole to his untimely demise minutes later. Talk about a bad day.

Awakening on a grand conveyor belt in a void-like nothingness being herded toward oblivion (referred to as The Great Beyond, designed in wondrous, visually creative detail by production designer Steve Pilcher), Joe fights his way off, landing in The Great Before. Here is the purple-tinted training ground for souls before they enter their bodies on Earth. It’s a more ethereal pre-school version of Willy Wonka’s chocolate factory.

The rules of this plane are simple: developing new souls are guided by mentors, who have already lived their lives on Earth and will help new souls find their passions. Overseers—Picasso-esque line drawings (Alice Braga, Richard Ayoade and Wes Studi) all named Jerry—help to assign each soul a personality before birth. (“I’m an agreeable skeptic who’s cautious yet flamboyant,” says one precocious soul in the making. “I’m a manipulative megalomaniac who’s intensely opportunistic,” says another in deadpan good cheer.) Once souls discover their “spark,” they’re given an entry pass to Earth.

Immediately, Soul raises a number of weighty philosophical questions. Is existence ruled by nature or nurture? Is each human being given a pre-determined personality? At what cost does chasing our dreams come?

In these metaphysical realms, souls have this warm bluish hue, a friendly glow with big (excuse the word choice) soulful eyes. Soul‘s imagining of not-yet-physical beings as amorphous blobs are as cute as you’d expect from Pixar, but made even more impressive by how they make the after (before?) life less threatening. Birth and death are natural and it’s important to take advantage of the time in between, Soul argues throughout.

There’s an innately positive message running throughout the film as it tells children to discover and embrace what excites them in life. Though, in typical Pixar fashion, viewers with some miles on their lives may appreciate the themes and the journey even more so than young children.

While stuck in The Great Before, the Overseers mistake Joe for a mentor and pair him up with Soul 22 (Tina Fey, energetic, humorous, and lovely as always), a disinterested spirit who has been avoiding Earth for a millennia. As we see in a series of effective cutaway jokes (including a particularly hilarious jab at the New York Knicks), 22 has cycled through thousands of historical mentors including Abraham Lincoln and Mother Theresa, none of whom managed to inspire 22 (much to their own chagrin). 22’s disaffected attitude is aptly summed up when she tells Joe, “You can’t crush a soul here. That’s what Earth is for.” But a loophole accidentally lands both Joe and 22 back on Earth in a Freaky Friday side-chapter full of humor and thoughtfully changing perspectives.

On Earth, Joe’s provincial mission to actualize his long-standing Jazz dreams at the expense of all else actually begins to widen his view, shedding light on his long-standing blindspots. At the same time, 22 first experiences sensory overload after being plopped down into a meticulously recreated busy New York City street, but eventually comes to realize that life on Earth is far more rewarding than she ever realized (pizza plays a key role, as it should). From here, the latter half of the film is inspirational and uplifting, applying meaning and appreciation to lives that even their livers believe to be wasted.

Joe can’t quite deviate from his path just yet, but he does realize his obsession has prevented him from taking an interest in others, making friends, and forming relationships. “When joy becomes an obsession, one becomes disconnected from life,” a mystical sign-twirling character voiced by Graham Norton explains. Soul manages a delicate balancing act of telling adults that it’s possible to become too consumed by the pursuit of a dream while still empowering kids to unearth their own passions. While achieving your dream may not always necessarily fill that hole in your heart, Soul puts a psychedelic twist on Mr. Holland’s Opus by suggesting that helping others nurture their own talent may be equally as rewarding.

Soul pushes Pixar further into uncharted territory than ever before. We’ve all felt stuck, separated from our dreams, knocked off course the paths we envision for ourselves. Yet Soul doesn’t shy away from telling hard truths to both kids and adults. That is does so with arguably Pixar’s most visually and conceptually daring creation is an added bonus. The transportive, colorful musical scenes—with Jon Batiste lending his expertise to the Jazz-infused score—are a new element to be enjoyed by audiences of all ages.

Soul may not coalesce quite as cleanly as some of its predecessors and, as this review may imply, leans more toward snappy exposition than raw emotion at times. But its big-hearted warmth and mature focus feel at once both new and familiar. In that sense, Soul is the very epitome of both The Great Before and The Great Beyond.

Soul will be available on Disney+ beginning December 25. 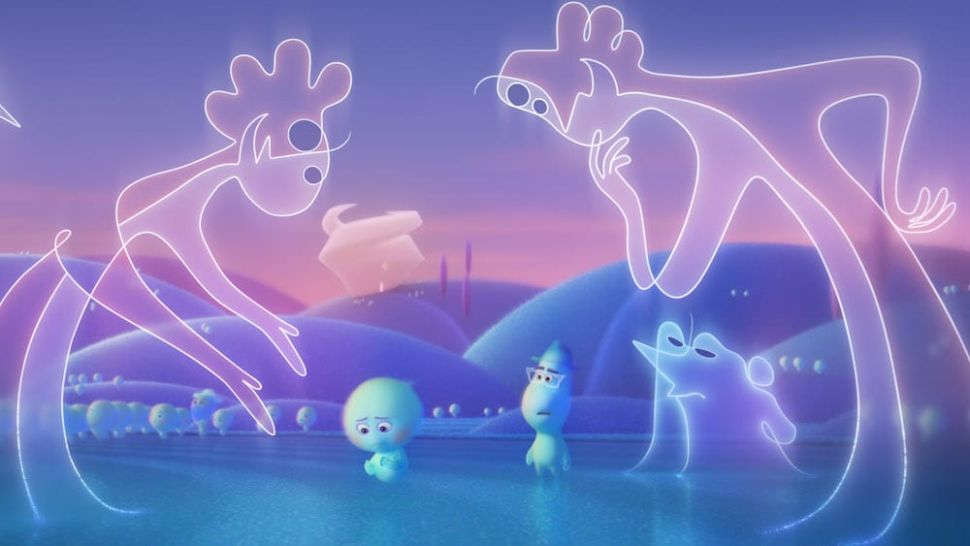