Towards the end of the year, I found it increasingly difficult to pick up a book. Any book. I had been burned by too many high-stakes literary debuts and wanted an old-fashioned page-turner. I decided to check out the work of Tana French from the New York Public Library. Her crime fiction is considered primarily with the failure of traditional justice in Ireland.

Morality tales are too often pedantic, out of touch and simplistic. Rarely do they attempt to reckon with the limitations and meanings of justice. Tana French has been writing against that grain, writing gothic crime novels that reckon with privilege and the haunted, cracking backchannels of police departments.

The Searcher is her newest crime novel that balances comfort, disease, and social isolation in equal and thrilling measure. The reader is ushered into the Irish countryside through Cal, an ex-cop attempting to rebuild his life after leaving the Chicago Police Department. Cal is a typical man, listening to Johnny Cash, frying bacon, and building furniture. He spends his time dropping hints about his old life in Chicago and trying to build cabinets. Slowly, a teenager named Trey begins hanging around the house. At first, Trey helps Cal with his DIY projects but soon draws Cal into a missing person case that forms the core narrative of the book. Trey’s brother has gone missing and Trey believes foul play is at work. Cal is both a cowboy and a seeker, attempting to find both redemption and passion through fixing a house and solving crime.

French has achieved cult classic status for her readability. Her novels consistently end up on year-end lists and top the charts on Goodreads. The Searcher is no exception. NPR critic Maureen Corrigan even listed it as one of her top novels of 2020. Tana French’s writing is always a step above typical commercial crime fiction. French is a vivid writer conjuring sunset and whiskey-soaked memories with equal beauty. She delivers plot twists with a laugh and a smug smile.

French’s work sits neatly alongside the work of many best-selling crime novelists: Agatha Christie, Stieg Larsson, Jo Nesbø. Each of these authors prevailed to their own niche noir. Foreign crime consistently tops the New York Times best-seller list. French continues that legacy, melding the tried and true hard-boiled cop narrative to the chilly atmosphere of rural Ireland. Rooks, bogs, farms, and menacing pubs populate The Searcher with a lush and brutal world. Small talk between our narrator, Cal, and his chatty neighbor often include detailed recipes for cooking rook. The use of an American to illustrate and cast doubt on Irish norms is an intriguing one. French attempts to break down how outsider status and privilege connect to larger systems of punitive power. Cal comes to the conclusion justice is never in the hands of the state.

The Searcher is primarily concerned with morality. Privilege and protection are common themes. Her last novel, The Witch Elm, reviewed by Stephen King, was praised for its depiction of white male privilege. The Searcher does not provide the same violent and excruciating insight into the world of privilege, instead choosing to look at a man who attempts to give up his mantle of power. French uses the ex-cop and the poor kid in town to probe the lengths people will go to close ranks around their own in order to maintain the status quo. Illusions to the economic crash in Ireland are frequent and peppered with slight references to Brexit and the Troubles. This tactic calls to mind the whispers of politics that Sally Rooney alludes to in Normal People. Rooney is continually criticized for not grounding her books within a specific political framework. Rooney argues she is a Marxist who does not write Marxist novels. Politics offer sliding doors in the backgrounds of the characters’ lives. For French as well, politics are a framework to think through character, not the other way around. French is invested in people’s reactions to limitations. What causes people to crack? Crime, and what constitutes crime, has always been shaped by race, gender, and class. Many Agatha Christie novels are being re-evaluated for their reliance on racist caricatures. Stieg Larsson’s novels deal directly with the lingering presence of Nazism in Sweden. Crime novels are forced to reckon with what happens when power meets circumstance.

Crime novels have the uneasy task of managing escapism and justice. They are entertainment and must keep the reader moving through a story at a nice clip. But they must also reckon with larger philosophical questions. What does justice look like in an amoral world? Most crime novels feature at least one corrupt cop, forcing crime novelists to create loopholes and elaborate reasons justice is still plausible in spite of the odds. Many crime novelists create a lone hero, “the one good guy” who sees and apprehends the racist cop or the cop who commits atrocities. These hero-complex novels can be delightful and terrifyingly readable tales of self-destruction. They’re often set in far-off worlds, such as Agatha Christie’s Death on the Nile or Stieg Larsson’s The Girl With the Dragon Tattoo.

French’s work however offers no such escapism. Evil is not over there; evil is not clear or easily delineated. Her characters are mixtures of victim, perpetrator, and detective. She delivers endings where protagonists face significant damage to their personal lives. Cal faces his trauma head-on, jumping into investigations and reckoning with his past life as a cop, husband and father. The Searcher presents a man who is not broken but attempting to sort through the wreckage of his life.

Towards the end of The Searcher we discover that Cal left the Chicago Police Department due to anti-black racism in his department. He no longer felt he could tell right from wrong and decided to remove himself from the equation. The Searcher does not attempt to justify or challenge his choice. He does not receive mercy, peace or easy answers. His inner life is a bubbling cauldron of doubt and pessimistic hope. Most of his inner life revolves around reflecting on choices he has already made. As an ex-cop, he makes quick, decisive choices based on his own interior compass. As he attempts to help Trey with the missing persons case, he ends up attempting to explain the concept of a moral compass to Trey. The grizzled veteran with a checkered past attempts to teach the next generation how to do better.

Crime novels will never instruct our politics. They are constructed as entertainment. The use of cop shows and the popularity of crime novels can be viewed as propaganda, ways of instilling faith in a breaking system. As crime novels crack and are forced to reckon with police brutality, the failing infrastructure of justice and racism, it will be illuminating to see how crime novelists handle a world that does demand justice in the face of oppression, brutality and cruelty.

“You take what comes your way, I suppose.” One townsperson tells Cal. “Mostly doesn’t seem like there’s much of a choice,” Cal replies.

None of this should suggest that The Searcher is a treatise on transformative justice or undoing patriarchy. The Searcher takes its characters’ humanity at face value. This is a frothy and exciting book with a beautifully constructed world full of Emmylou Harris, femme fatales, bar fights, jarring investigations, incompetent cops, nosy neighbors, and twisty revelations. But for the reader who wants a little ambiguity and mess in their crime novel, a little terror that hits a little too close to home, this book may appeal as well. 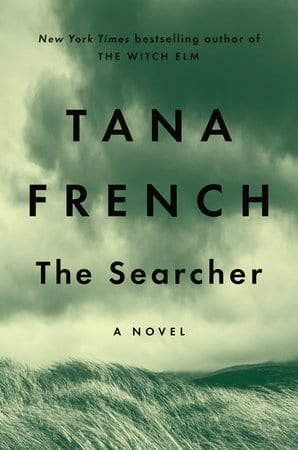