Another powerful, mesmerizing and downright heartbreaking performance by the great Anthony Hopkins enhances The Father, a bold box-office gamble that pays off handsomely for anyone interested in getting more out of movies than usually offered. Elegant of demeanor but shabby of mind, arms folded in arrogant defiance as he grapples with the slowly encroaching pitfalls of growing dementia, the star lights every grim, dark corner of what it feels like when a vital 80-year-old loses his mind to Alzheimer’s. The result is a film of imagination and terror, both devastating.

Based on a highly regarded work by the French playwright Florian Zeller, who did his own adaptation for the screen with the aid of seasoned writer Christopher Hampton, The Father also marks the author’s formidable feature-film debut as a director. Mr. Hopkins plays the central role, performed on Broadway in 2016 by Frank Langella. It’s a daunting undertaking for any actor, because the whole daring concept tells the story of a senior citizen facing his own third-act finale while he moves through the stages of dementia from the patient’s own constantly changing point of view. This requires alternating scenarios that keep the actor and the audience on their toes.

Strict attention seldom required of today’s movies must be paid. The result challenges everyone involved because it contrasts what the father sees with the quite different world around him, which is seen and interpreted by people who react in literal opposition. So we don’t always know the real from the unreal, but part of the fun is the struggle to keep guessing.

For example, Mr. Hopkins wanders around his elegant, book-lined London apartment in his pajamas, getting dottier by the minute despite the immaculate concern and attention of his troubled, loving, but exasperated daughter Anne, played by the brilliant Oscar winner Olivia Colman. First, she voices her alarm because he has just angrily sacked his longtime nurse and caregiver, accusing her of stealing his watch. Anne doesn’t know how to replace her, so she promises to make the interim pleasant by baking her father a chicken, but when she returns from shopping, there is no chicken. In fact, there is also no Anne, who has moved to Paris to jump start her life with a new lover. Instead, there’s a new nurse, who looks exactly like another daughter who apparently died in an accident years earlier. But did she? Anne’s husband appears and slaps the old man across the face. But Anne isn’t married. In truth, she’s not even in England any more. And so it goes, with a polished cast of six brilliant supporting actors essaying the characters in the father’s diminished world, interchangeable and confusing but never really bewildering, thanks to the crystalline script. Everyone has a great moment to play, even when two different actors play the same role, but they all revolve around Mr. Hopkins like moving stars around a stationary solar system—most ably by the sensational Olivia Colman as the daughter.

This, of course, provides Anthony Hopkins with a meaty role that plays like an elaborate game of Clue. Running a gamut of emotions, he is egotistical, senile, lovable and infuriating at the same time, but the star never overplays the cornucopia of mixed emotions at his disposal, examining them all with magnificent equanimity. He plays the frustrations of senility moment by moment, incorporating the fatigue and mental chaos until at last he breaks down and weeps for his mother to fetch and rescue him from the prison of his mind. It’s one of the most wrenching scenes of the year. You’ll think about this one, and what it reveals about growing old with dignity, long after The Father ends. 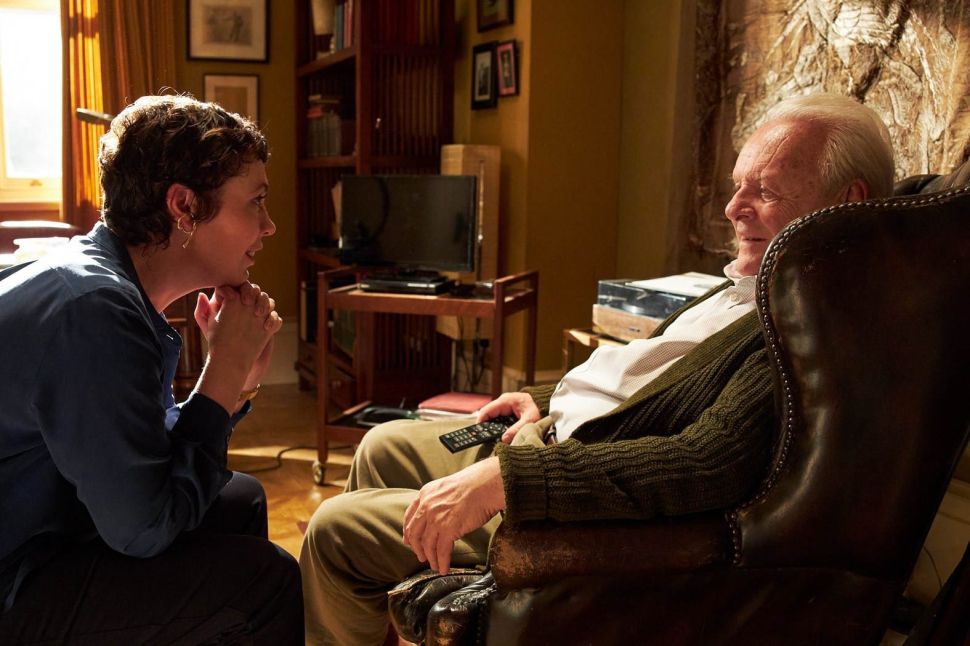