A lot of the critical reception of the HBO Max series The Flight Attendant, which just wrapped its first season this week,has presented it as a fun, light, largely brainless spy/adventure series. Variety called it a “fizzy cocktail of a noir that goes down easy.” CNN says it’s “the TV equivalent of summer beach reading, in mostly good ways.” And so forth.

You’d never know, from these cheerful summaries, that the series’ heroine is a desperate alcoholic with terrifying PTSD from a gruelingly abusive childhood. Whee!

So, what happened? Why on earth would a reviewer refer to a show as a “fizzy cocktail” when the protagonist is very clearly in the throes of devastating alcohol addiction? A Star Is Born certainly has upbeat moments. But reviewers didn’t refer to it as “a shot of love with a chaser of music!” because that would obviously be horrible. Why are the darker elements of addiction and mental illness so much easier to see when it’s Bradley Cooper rather than Kaley Cuoco drinking themselves to death?

The question is part of the answer. The Flight Attendant is silly and exciting, rather than bleak and nightmarish, in part because the lead is played by Kaley Cuoco. Cuoco is most famous for her role as fun party girl Penny on The Big Bang Theory, and it’s easy to see her performance as Cassie in The Flight Attendant as a just slightly more mature continuation. Cassie mugs and double-takes and jokes in somewhat similar ways to Penny. So is her sloppy drinking that different from her predecessors cheerfully enthusiastic alcohol consumption?

Beyond Cuoco personally, the critical confusion about The Flight Attendant is probably in part because it’s about a flight attendant, and also because it’s about a woman. A single woman traveling and drinking and hooking up with guys makes The Flight Attendant sound like chick lit or Sex and The City—glamorous and trashy rather than desperate. Flight attendants themselves are a feminized and often sexualized profession. Rock guitarists have demons. Flight attendants, we assume, have brainless, sexy fun.

The Flight Attendant’s showrunners and marketing department also bear some responsibility for the confusion. The show’s jazzy theme music, and its stylish use of split screens, signal excitement and high class entertainment, rather than a bleak descent into the abyss. The serie’s promotional materials also tend to emphasize luxury rather than squalor. The show offers a “thrilling coffee-ology” Zoom tutorial. (At least they’re not pushing branded cocktails.)

I do also wonder if the creators ended up making a bleaker series than they intended in some respects. The novel the series is based on by Chris Bohjalian doesn’t soften the protagonist’s alcoholism. But in transferring the novel to the screen, the demand for visual interest has the disturbing side-effect of making Cassie’s mental illness look much more intense. Throughout the series, rather than just remembering the moment where she woke up beside the dead body of a one-night-stand, she has intense flashbacks where she hallucinates that she’s back in the room talking to the dead body, which frequently talks back.

HBO also fills in details of Cassie’s abusive childhood. In the book, her father is just a violent drunk. In the series, he recruits his pre-pubescent daughter to be his drinking buddy, encouraging her to guzzle beer and mock her older, gay brother. In a central sequence, Cassie and her dad are in the car drinking when he hits another vehicle. Her dad dies, and Cassie blames herself as his drinking companion for encouraging him.  It’s viscerally upsetting, and only more so as it becomes clear that Cassie (again in an innovation on the book) doesn’t remember large portions of her childhood, including many of the details of that fatal crash. She has hallucinations of a giant rabbit, for example, which turns out to be a memory of a rabbit which was by the side of the road when she staggered out of her dad’s totaled truck.

The series, television-style, adds a lot of sequences of public humiliation to the novel’s narrative. Cassie attends a funeral and her cell phone goes off again and again. She goes to an office to collect information and knocks over and smashes large valuable (if hideous) sculptures. In the most painful scene, she goes out with her brother’s family while drunk, buys his daughters toys against his wishes, and gets them to lie to their parents about it. The confrontation when her brother finds out what she’s done is a scraping-bottom-with-your-teeth moment, nauseatingly humiliating.

The additional material added for drama and visual interest, then, all ends up making Cassie seem more out of control and more traumatized, whether or not that was exactly the intent. The novel is about an alcoholic flight attendant who is thrown into an espionage plot by accident, and acquits herself surprisingly well despite her addiction. The television show is about a woman so traumatized and ill that a man being murdered next to her is barely a bump on her freefall into psychosis and self-destruction.

The disconnect between the hype and the actual show may have been accidental—a suite of choices which together steered the series into darker skies. But it does in part reflect the show’s themes. At least one of Cassie’s colleagues idolizes her because she seems to have so much fun and to do whatever she wants. And Cassie herself rewrote her own childhood as a time when drink was part of doing goofy, enjoyable things with her dad. The stereotype of the fun party girl flight attendant is one that Cassie, other characters, reviewers, and even the show marketers, really want to be true. It’s sexy; it’s fun; it goes down easy. But The Flight Attendant is about how what we think is sexy, and fun, and easy can in fact leave you facedown in a bedful of blood and remorse. It’s all fizzy until it isn’t.

The Flight Attendant is available to stream on HBO Max. 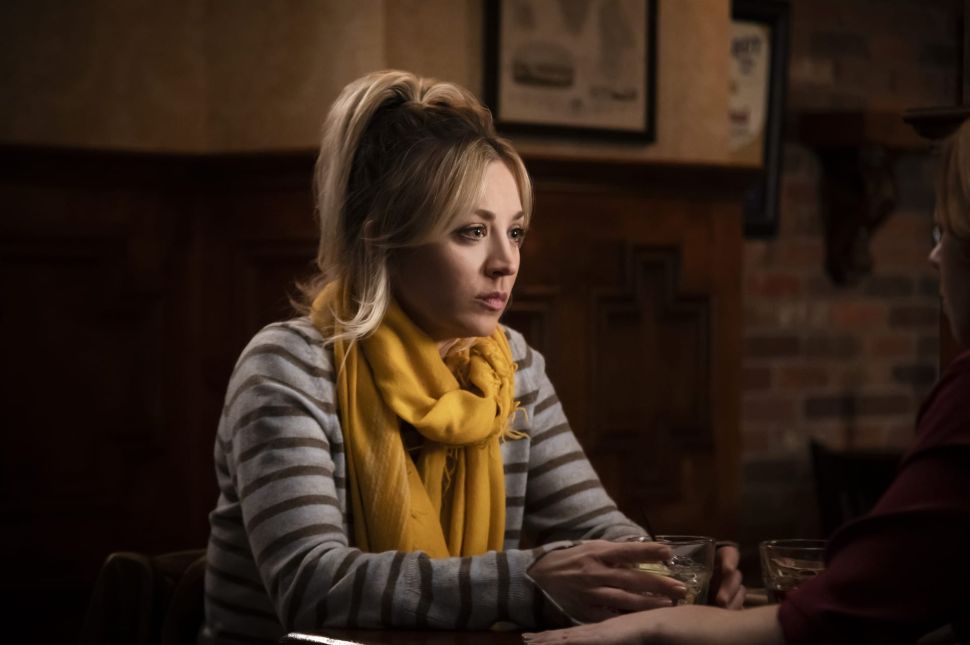