Critics of the Star Wars movies have often pointed out that they focus solely on the handful of characters who hold influence over the entire galaxy through their actions in the major conflicts: totalitarian emperors, Jedi knights, ace pilots who destroy Death Stars, rebel leaders. But what about the rest of the galaxy? What about the poor guy who steps up to become a marshal to protect his town from pirates? Or the mechanic who is just sick and tired of war? It’s here where The Mandalorian shines and cements itself as an essential part of the Star Wars mythos.

It is a time of lawlessness and chaos in the galaxy, that much we know from the very first episode of The Mandalorian. Despite their victory at both Endor and Jakku, the New Republic isn’t really in charge in the Outer Rim, where pirates, bandits and bounty hunters thrive. In Season 1, Greef Karga jokes to Din Djarin that he can report the Imperial officers on Nevarro to the New Republic—knowing they won’t do anything with that information. This tracks with what we know from the 2015 novel Star Wars: Aftermath, which revealed that the New Republic started a military disarmament program in order to focus on becoming a democratic peacetime government and avoiding associations with the old Empire. The problem is that this left the New Republic severely understaffed, especially in the Outer Rim, which allowed Empire remnants to thrive and make trouble.

We see this play out when we meet two X-Wing pilots in Season 2’s episode “The Passenger,” who act as regular traffic cops, inspecting random ships for Empire sympathizers rather than doing anything more useful. Not only that, but they are clearly soldiers with war experience. One of them, Carson Teva, tells Cara Dune that he served in Alderaan, but is now bored of acting as glorified security with little agency in a vast space area. Though we don’t spend significant time with Carson Teva, we know he isn’t exactly doing the job he signed up for.

This applies to Cara Dune herself. When we meet her, we discover she is a former Shock Trooper — basically a black ops agent for the rebels whose job was to cause as much trouble as possible to the Empire, no matter the ethics involved. She’s clearly in it for vengeance, making the Empire pay for destroying her home planet of Alderaan. The problem is that, after the New Republic was established, she was relegated to menial peacekeeping jobs she felt weren’t worth doing.

That the show has characters repeatedly making remarks about Alderaan around Cara Dune speaks to its ability to make the war feel impactful in a way we hadn’t seen before onscreen — outside of the animated shows. Though it’s set almost 30 years after the Clone Wars ended, Din Djarin spends most of Season 1 still reeling from his trauma since witnessing the Separatist Droid Army destroy his town and kill his parents. In the Season 2 finale, Bo-Katan seems disdainful of Boba Fett for being a clone, and tells him, “I’ve heard your voice a thousand times,” as Clone troops briefly occupied Mandalore during the Siege of Mandalore. Also for Cara Dune, the destruction of Alderaan a decade earlier continues to affect every decision she makes in the show. No matter how big or small the impact, The Mandalorian makes an effort to show the audience that individuals on the ground suffered due to the larger galactic conflicts.

“Somewhere, someone in this galaxy is ruling, and others are being ruled.”

The show doesn’t stop with Republic-aligned characters, either, actually taking the time to show people from both sides of the conflict, and portray their views of it. In the first season, we meet Kuiil, who was forced to serve as a mechanic for the Empire and now cares little for intergalactic conflicts, but is willing to fight to reclaim his peace and quiet.

Then there’s Migs Mayfeld, who served as a sharpshooter for the Empire during the war, but defected after witnessing the devastating effects of Operation Cinder — a plan devised by Darth Sidious to be implemented after his death, which would decimate the Imperial forces for failing to protect their Emperor. Mayfeld considers the New Republic’s failure to bring order to the galaxy as proof that they are no better than the Imperials. As Mayfeld sees it, people in small towns don’t care who governs all the way out in the Core Worlds. “Somewhere, someone in this galaxy is ruling, and others are being ruled,” he says. The Mandalorian briefly explores the idea that the Empire’s rule did some actual good, with Werner Herzog’s Client telling Din Djarin back in Season 1 that the “Empire improves every system it touches” judging by every metric. Mayfeld seems to reconsider the moment he confronts his commanding officer during Operation Cinder, and realizes the Empire is still working on creating planet-destroying weapons. It’s a short scene, but it illustrates why Mayfeld really would defect from an Empire that “improves every system it touches.”

This difference in ideology and methods is doubled down in the latest season’s finale. “The Rescue” puts to rest every doubt that the New Republic is better than the Empire and shows how regular Imperial soldiers view the conflict. Seemingly confirming the decades-long discussion seen in the movie Clerks, the episode introduces us to an Imperial soldier who taunts Cara Dune and says he saw Alderaan destroyed. He shows genuine sadness as he recounts the “many millions” who were killed on both Death Stars “as the galaxy cheered.” Compared to that, he says, the destruction of an entire planet “was a small price to pay to rid the galaxy of terrorism.” That quote may be one of the best things The Mandalorian has added to the Star Wars canon. Not only does the scene humanize the small Imperial trooper who lost just as many loved ones as the Rebels did, but it shows that some people really did drink the Imperial Kool-Aid.

Despite the audience being fully aware that the Emperor is not only a cunning politician, but a member of an ancient order of evil wizards, regular Imperial soldiers don’t know this. As the Client demonstrated, some people genuinely believe the Empire “improves every system it touches,” and for them, the Rebels are nothing but terrorists.

As the final scene of the season reminds us, Star Wars will never stop shoving the story of Jedi knights and galactic Empires down the audience’s throats. But what The Mandalorian proves is that the franchise is better when we know why regular people care about the fight between Jedi and Sith, Republics and Empires. It is when we meet the people who were actually affected by the larger stories, that the franchise makes us care in the wars in Star Wars. 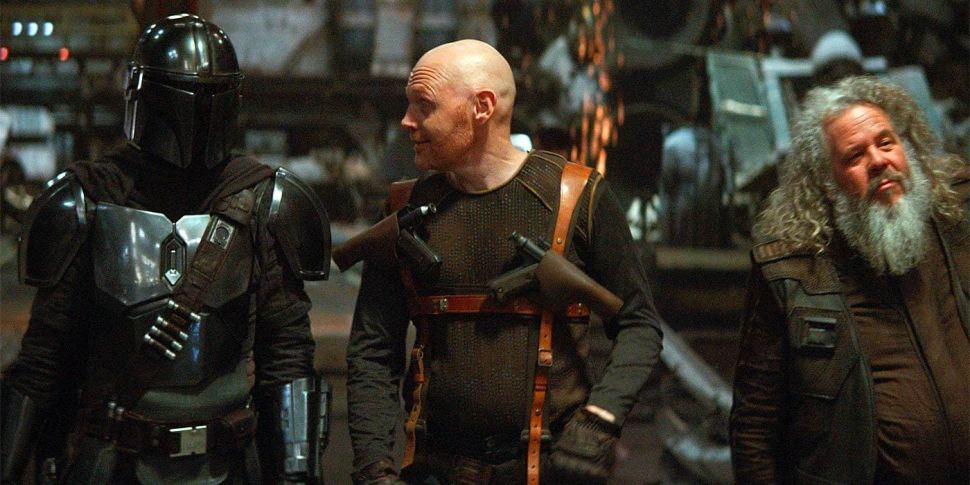