Had 2020 unfolded in a normal manner without a global pandemic, it was widely expected that Tom Cruise’s Top Gun: Maverick would have been one of the highest grossing films of the year. Alas, 2020 has been anything but normal and we’re now forced to wait until July 2, 2021 to catch a glimpse of the decades-in-the-making legacy sequel. Still, given the high-flying, jet engine-fueled action Maverick promises, it’s expected to be a blockbuster worthy of the big screen.

That sentiment is supported by co-star Miles Teller, who recently detailed the insanely intense preparations he went through to get flight ready while assuring fans that the aerial dog fights to come are 100% authentic.

“There is no green screen in a Top Gun movie,” Teller, who plays Goose’s son Bradley ‘Rooster’ Bradshaw, recently told Men’s Journal. “Every shot, every stunt, was the result of the work, the real sweat, that we all put into it. The production was over the course of a full year, which was definitely the longest shoot I have ever been a part of.”

Before Teller even stepped on set, he was grinding just to be able to receive approval to get into the air. It turns out that accurately portraying a fighter pilot requires an immense amount of work beyond just acting.

“I had about three months of flight training before starting the movie. That time was important to get comfortable with the crafts but also to build up our G-force tolerance, because all of the aerial elements were shot practically. The training started in a Cessna, and moved to an Extra 300, a single-prop aerobatics craft, where you start to improve your G-tolerance. From there we got into an L-39 Albatros, flying with these guys called The Patriots, who are the civilian equivalent to the Blue Angels.

Right off the bat, I am flying this fucking plane myself with The Patriots in formation with three other planes around, which just felt insane. I had one jet right above me, so close, and then planes on both wings, then we did a loop while holding that formation. I was holding the stick, and I landed the plane as well.”

In addition, Teller and other cast members needed to pass a Naval Aviation Survival training course. This included learning every protocol needed in case a pilot is forced to eject over the ocean. The actors needed to survive “The Dunker,” which they put you into a modified helicopter, strap you to a chair, and submerge the tank underwater. Blindfolded, each participant must prove they can go through the right operations to escape as calmly as possible. Remember that next time you assume actors are just overpaid pretty faces playing make believe for a living.

“Playing Goose’s kid and getting to continue that storyline that was established in such a powerful way all those years ago, there is a lot of history there,” Teller said. “I think when audience realizes the character I play is that tiny kid they saw in the original, it is going to hit. I was able to see it a couple weeks ago. The movie just blew me away, and my wife said, ‘That might be the best film I have ever seen.’ She was crying multiple times.”

The original Top Gun was directed by Tony Scott and released in 1986. It went on to earn $357 million at the worldwide box office, or nearly $850 million today when accounting for inflation. Top Gun: Maverick, directed by Joseph Kosinski, is set in a world of drone technology where dogfighting is becoming increasingly obsolete. After more than 30 years of service as one of the Navy’s top aviators, Pete “Maverick” Mitchell (Cruise) is still pushing the envelope as a courageous test pilot while dodging the promotion in rank that would ground him. 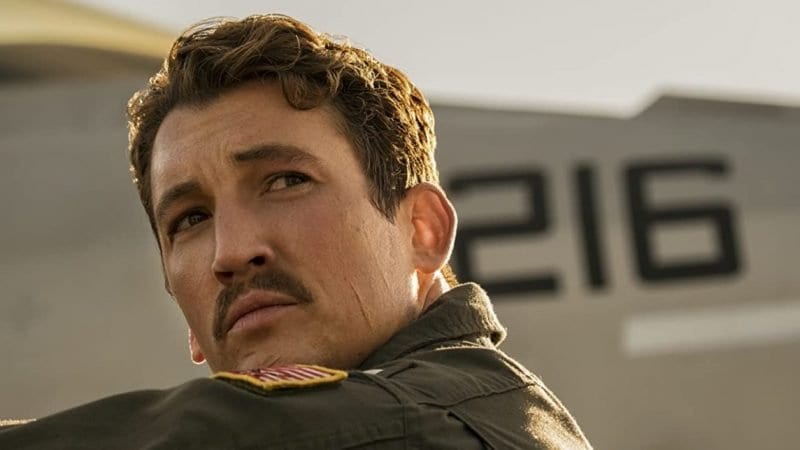