We don’t know about you, but we’re ready to move on from 2020 now. So for New Year’s Eve and New Year’s Day, Observer Entertainment has curated the guide below to help figure out what to watch this weekend on your off-hours. The major streaming services alike are represented below, from Netflix to Hulu to Amazon, and we’ve offered recommendations for for all of them, including both new releases as well as hidden gems that may be buried between the cracks.

This Mike Nichols gem is on Hulu, thank god. Starring the sparkling Melanie Griffith, Harrison Ford and Sigourney Weaver, plus a laughably young Alec Baldwin, Working Girl weaves gender and class commentary into a canny comedy about a woman who wrangles her way up the corporate ladder. It’s shown its age three decades after its release, but the film remains a funny, buoyant showcase of great acting, writing and direction. Watch Working Girl on Hulu.

The quintessential New Year’s movie and one of the greatest romantic comedies of all time, When Harry Met Sally… is a must-watch every holiday season thanks to a sparkling script by Nora Ephron and perfect direction by Rob Reiner. Audiences may remember the unforgettable “I’ll have what she’s having,” but I prefer Billy Crystal’s delivery of this line: “I came here tonight because when you realize you want to spend the rest of your life with somebody, you want the rest of your life to start as soon as possible.” Watch When Harry Met Sally… on HBO Max.

One of the greatest movies of all time, Billy Wilder’s film Sunset Boulevard stars William Holden as screenwriter Joe Gillis and Gloria Swanson as Norma Desmond, an aging actress who falls in love with him and ultimately kills him. That’s not a spoiler—the film opens on his body floating in a swimming pool and is narrated by him in flashback—and knowledge of it doesn’t detract from the film’s effectiveness. This pick isn’t exactly comfortable, but it notably is free to watch on Pluto. Watch Sunset Boulevard for free on Pluto TV.

Nostalgic millennials and zoomers alike might recognize the holiday hook in High School Musical: A New Year’s Eve duet is what sparks the puppy love between Zac Ephron’s Troy and Vanessa Hudgens’ Gabriella in the film. What follows is one of the Disney Channel’s most successful romcoms, amplified by song, dance and high school heart. Watch High School Musical on Disney+.

The story of Futurama actually begins on New Year’s Eve in its first episode, “Space Pilot 3000.” Slacker deliveryman Fry, our noble-idiot hero, accidentally cryogenically freezes himself after popping a beer alone on New Year’s Eve, becoming unfrozen centuries later in the future. More than 20 years after its debut, Futurama remains relevant; who among us would not prefer to escape the vicissitudes of the present? For a New Year’s binge, I’d watch “Space Pilot 3000” and “Jurassic Bark.” Watch Futurama for free through Comedy Central.

After some controversy, the Charlie Brown and Peanuts Thanksgiving and Christmas holiday specials were aired on PBS and made available to stream for free over the holidays on Apple TV+. The same is not true of their New Year’s counterpart, which is only available through Apple. Directed by Bill Melendez and Sam Jaimes, Happy New Year, Charlie Brown! revolves around a holiday party and Charlie Brown’s struggle in writing a book report on War and Peace while he pines for the Little Red-Haired Girl. Watch Happy New Year, Charlie Brown! on Apple TV+. 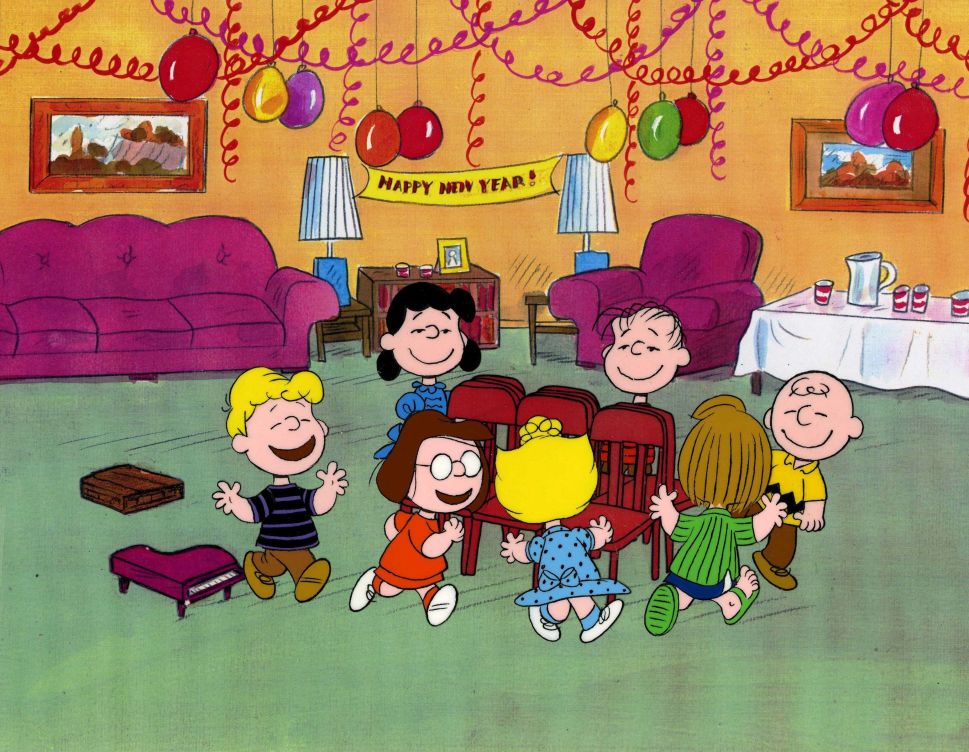