In a year that has left the world in desperate need of a flight from reality, Wild Mountain Thyme—the long-awaited romantic comedy from Oscar, Tony and Pulitzer Prize-winning writer and director John Patrick Shanley—is a welcome, albeit unconventional, love story that will likely delight more nostalgic theatergoers than hard-bitten critics.

Set in the beauty of the lush Irish countryside, the film, which is based on Shanley’s hit Broadway play Outside Mullingar, stars Emily Blunt and Jamie Dornan as two star-crossed lovers whose neighboring families are caught up in a bizarre feud over a strip of land that separates their two farms. Blunt plays Rosemary Muldoon, a passionate and headstrong farmer that has an unshakeable yearning for her off-kilter neighbor, Anthony Reilly (Dornan). Unfortunately for Rosemary, it’s an enduring love that has gone unrequited—or at least unrealized—by Anthony for nearly three decades.

Dornan’s Anthony is a far cry from his days as billionaire Christian Grey in the Fifty Shades franchise or serial killer Paul Spector in The Fall. An eccentric introvert, Anthony’s isolated upbringing in the heart of Ireland leaves him with a sense of self that is both unworldly and unmistakably human. After years of playing dark, brooding men in leading roles, Dornan is able to tap into a different, and perhaps more authentic, side of himself to shine as an endearingly awkward farmer in his mid-30s whose greatest fears—including a belief that he is inherently unlovable after a failed childhood romance—will ultimately transform his melancholic life.

After a series of flashbacks that reveal the origins of Rosemary’s independence and steadfast love for Anthony, the film begins on a rainy night after the funeral of Rosemary’s stubborn, crow-shooting father, Chris Muldoon (Don Wycherley). It is in a candid conversation about death and inheritance with his widowed father, Tony (played by the legendary Christopher Walken), and Rosemary’s newly-widowed mother, Aoife (a role reprised by original Broadway cast member Dearbhla Molloy), that Anthony discovers that he does not stand to take over the Reilly family farm. Despite his years of maintaining and modernizing the property, a blindsided Anthony later learns that his hypercritical father is planning to sell the farm out from under him to his wealthy American cousin, Adam (played by Mad Men’s Jon Hamm), who wants to find a bride and settle down in Ireland.

There is just one complication: Nearly three decades ago, Tony sold a certain strip of land to the departed Muldoon, a patch that runs right through the access route to the Reilly farm, that would make a sale—even to his naïve nephew—more difficult. It’s a plot of land that is inherited not by Chris’s widow, Aoife, but rather by his daughter, Rosemary, who has been smoking in the pouring rain while the trio chats away in the kitchen.

Despite holding a petty grudge against Anthony for pushing her down as a child, Rosemary is visibly disconcerted by the very thought of Tony handing his farm down to Anthony’s cousin. In an explosive exchange with Tony at the contested parcel, which leaves her quick-witted mother smirking with pride, the audience is given their first major clue that lying underneath Rosemary’s iron-clad exterior is a deep-rooted longing for the boy next door—and a Herculean amount of patience.

While she might not have the perfect Irish accent, a fact made abundantly clear by the Irish side of social media, Blunt’s fiery portrayal of Rosemary makes her a force of nature. In the same breath, she is able to masterfully portray the emotional agony that sends Rosemary into a deep state of exasperated desperation. While Rosemary might be a fiercely independent farmer that knows exactly what she wants, Blunt’s nuanced approach illustrates that she is still a hopeless romantic that longs for the basic human connection that has eluded the better part of the world this year.

Anyone who has ever seen a romantic comedy can predict the resolution of Wild Mountain Thyme, but it’s the anticipation—and the eventual execution—of the final showdown that makes the denouement so satisfying. From the time that we first see them standing together in the rain, Blunt and Dornan have a beautiful, natural chemistry that seems to build as tensions rise between their characters. But given that Rosemary and Anthony are both stubborn to the core, it still takes another year before they can break their ridiculous stalemate, with the help of a dark secret from Anthony that is so ludicrous that it will stop any movie know-it-all dead in their tracks.

Nevertheless, it’s a year that is well-spent for Anthony, who is given the chance to reconcile with his aging father in a moving scene from cinematographer Stephen Goldblatt that highlights the complicated relationships between fathers and sons and makes the film worth watching alone. Elevated by the stunning soundtrack of composer Amelia Warner, Shanley’s screenplay seems to take on a fairy-tale charm with its colorful and lyrical dialogue, both in playful and somber scenes, but it must be said that this unique piece, much like his Oscar-winning Moonstruck, will not be everyone’s cup of tea.

While Wild Mountain Thyme might be far from a perfect depiction of the intricacies of central Ireland, it is, at its core, the fabled and beautifully shot love story of two witty and eccentric childhood sweethearts that will have the ability to warm the coldest of hearts this holiday season.

Wild Mountain Thyme is now available in theaters and on demand. 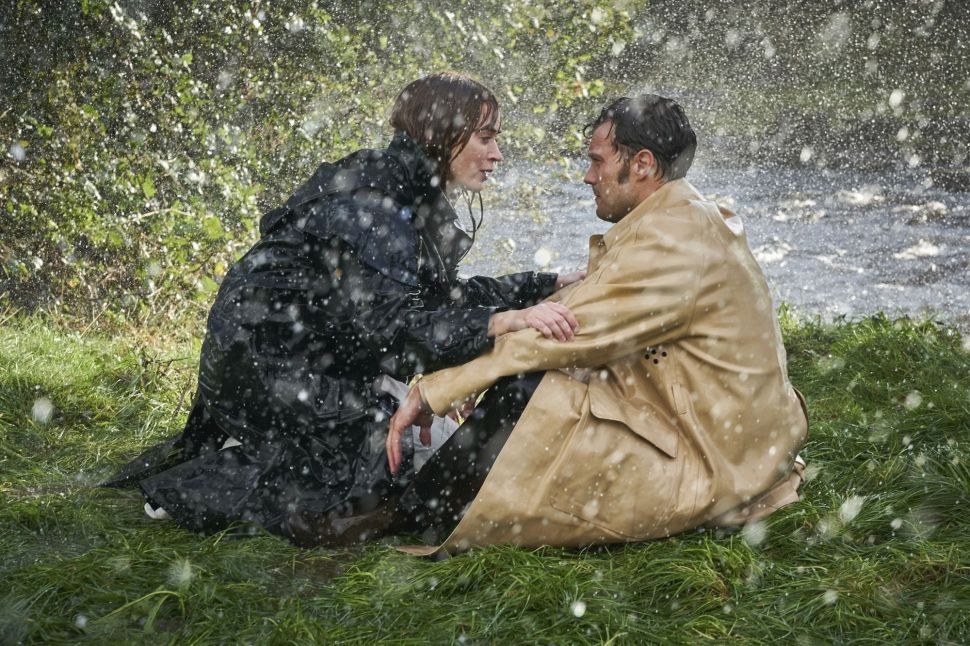