Wolfwalkers concludes the Irish Folklore trilogy from Cartoon Saloon, the studio behind the visionary movies, Secret of Kells and Song of the Sea. In Wolfwalkers, a young English girl with hunting aspirations, Robyn Goodfellowe, wants to rid the woods of the wolves. She wants nothing more than to impress her father (Sean Bean), and enters the woods on her own. There she finds Mebh, a wild girl with a magical secret, the ability to turn into a wolf in the light of the moon. Robyn and Mebh must find Mebh’s missing mother and save the forest from a great evil.

Each entry in the Irish Folklore trilogy has been created with hand-drawn animation, an artform that was at one time the de facto way to animate, but has now become too costly. Many animation teams from around the world, including Disney and Studio Ghibli, have turned to CG and other techniques to make their workflow less expensive and more efficient. But there has been something lost in the transition to an all-digital workflow and Cartoon Saloon’s movies shine with expressiveness.

Wolfwalkers directors Tomm Moore and Ross Stewart have seen their techniques become treasured once again, with new film warmly received by critics and audiences alike. They spoke with Observer about the genesis of the movie, why they might need therapy, and the techniques they used to bring this magical story to life.

Observer: Where did the first idea for Wolfwalkers come from? Has this always been envisioned as a trilogy?

Tomm Moore: When we were making Song of the Sea, Ross and I decided that we could make a final film that would conclude the trilogy. We deliberately crafted something that contained all the things we were passionate about, like ecology, habitat destruction, and the folklore of the Wolves of Ossory from this region in Kilkenny. Those were the themes we wanted to explore. We knew we wanted to speak about polarization. What would it take for the empathy of a hunter or someone who wants to be a hunter to change and see the world from the point of view of the thing they are hunting? That seemed to speak to a need in today’s world for people to see the point-of- view of their so-called enemies, because we’re so polarized.

Your stories reach into the depths of Irish folklore. Were you ever concerned about the audience’s interest in the subject matter? Especially the background of the Cromwellian invasion of the 1640s.

Ross Stewart: You can make a gripping story set in any time or any historical place or any society. While our film might be uniquely Irish, I think it’s a story that could be told in many, many different cultures. It’s really just about a colonizing force and an indigenous way of life and about how those two could learn to understand each other. We were aware of not going too dark in some of our scripts. Once you’re focusing on the kids’ lives and their emotional journey, then I think the setting is interesting rather than a distraction.

While our film might be uniquely Irish, I think it’s a story that could be told in many, many different cultures.

Each of the films in your Irish Folklore trilogy feature father figures who’ve been constrained by the circumstances of their world. What has informed your decision to tell these stories about troubled men and their spirited children?

Moore: You’ll have to ask my therapist. I think it’s something that I look back on and see a connection that I didn’t intend. It’s funny. [There’s] the themes we wanted to explore, and then there’s the themes you realize you’ve been exploring when you look back on your work. All the movies are set in that time between childhood and adulthood, when you’re kind of coming to understand who you are yourself and what you want. It’s part of the journey to find that you’re on a different wavelength than your parents. That transition is very rich for drama.

How has that process evolved since Secret of Kells and Song of the Sea?

Stewart: Even though Secret of Kells was done on paper, we did use more digital effects. Now when we look at Secret of Kells it seems a little bit dated, a little bit too computery because of the software that was available at the time. Having learned that, we wanted Wolfwalkers not to have digital effects that would date in the same way. It looks like an illustrated storybook.

Moore: The biggest thing that we did is that we had more luxury in the storyboards. We storyboarded with a big team. We took an extra eight months after we had completed all the storyboards to rework the first act. That’s the kind of luxury big studios like Pixar have. We are a small team and you usually get one crack at it. If you didn’t do the rewriting in the draft, you weren’t going to do it in storyboards to the extent we did it in Wolfwalkers.

Can you discuss when Robyn first discovers her new abilities, what you described as Wolf vision was designed?

Stewart: If you add in all those beautiful little scenes, it makes up about three and a half minutes of time. Those scenes took about the same length of time as the entire film production, because of the amount of work that went into them. We worked with Eimhin McNamara from Paper Panther Studios and he’s done a lot of animation with mixed media. We knew he would bring this craft approach to the animation and after quite a few months of developing, Eimhim built an environment in VR and we did a camera pre-vis. Every frame was printed out and hand rendered. We knew that this would be an immersive, glorious experience for Robyn. Once she experiences this, she can never go back to her normal way of life.

In Wolfwalkers you are using a split screen to show passage of time. It’s almost like a comic strip style. What inspired you to do it that way?

Moore: That started with Secret of Kells because in medieval art you have triptychs, where you have three panels that tell different parts of the story. Like a simple comic strip. In Wolfwalkers, it had another level of significance. We were trying everything we could to reinforce this sense of feeling trapped or caged in a box. We asked our storyboard artists to look for opportunities to use this idea. What I really loved was that they were trying to knock each other out with ways to divide the screen.

Stewart: One of our storyboard artists had done a lot of 3D work and brought these perspective shots that were really dynamic. In other films, we would have decided it wasn’t in our 2.5D or 2D style, but because [Wolfwalkers] is an action movie we went for it. We were open to collaboration from all different inspirations.

Moore: It reminds me of something we never say when people ask about what’s different with [Wolfwalkers]. Normally with hand-drawn animation you try to limit the cuts because each cut needs a fully painted new background. There’s so many cuts in [Wolfwalkers]. In a typical action movie, there’s a quick cut, for lots of coverage. Every time you cut in animation, it’s another cost.

Stewart: There’s about [fifteen-hundred] background [in Wolfwalkers], and there was about eight-hundred in Song of the Sea.

Moore: Song of the Sea was much slower, a gentler movie.

Wolfwalkers is now available to stream on Apple TV+. 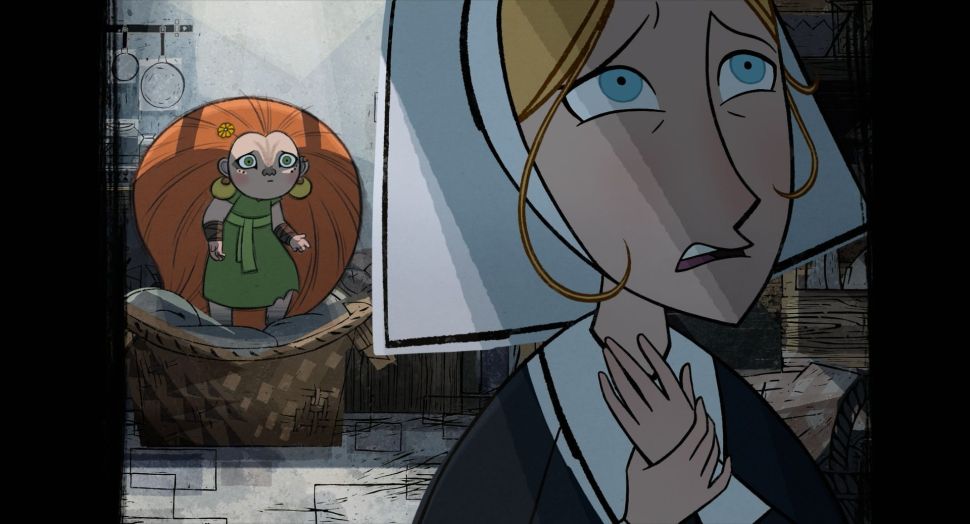