In a year with very few big blockbuster releases, Wonder Woman 1984 hopes to connect to audiences using a superpower only someone like Diana Prince can wield in a year like 2020: humanity. But despite some fun ’80s kitsch, Gal Gadot’s lasting endearment as our heroine and some amazing, albeit campy work from co-stars Pedro Pascal, and Kristen Wiig, it’s a film completely devoid of any form of diversity, which really conflicts with the overall message of unity and community that the film wants to represent.

When we last left Diana in 2017’s Wonder Woman, World War I was just ending, she had lost Steve Trevor (Chris Pine), the love of her life in a plane crash, and she managed to save the world from destruction at the hands of a fellow god, Ares. Seventy years later, she is working as a curator at the Smithsonian Institute in Washington, DC. Lonely and still pining for her lost love (despite it being many decades since they last saw each other), she befriends her new co-worker, anthropologist Barbara Minerva (Kristen Wiig), just as a mysterious artifact arrives at the museum. Barbara initially dismisses the rock as some useless novelty, but not before the rock reads Diana’s unspoken, deepest wish: to be reunited with Steve. Within a few short hours, her wish is granted, and Steve returns—kinda. Not wanting to question the why or how of his resurrection, Diana turns a blind eye to what she suspects may be the reason: the mysterious rock.

Barbara also starts to see what the rock can do, and after the momentary terror of being followed by a creepy man on the street, and a lifetime of being put down and ignored, Barb asks that the rock grant her strength, just like Diana. Drunk with newfound abilities and growing confidence, Barbara introduces Maxwell Lord (Pedro Pascal) to the stone, unknowingly unleashing a power-hungry villain with a huge chip on his shoulder. Barbara’s meekness starts to turn into a bitter strength, quickly transforming her from Diana’s new friend into Wonder Woman’s bitter, angry nemesis, Cheetah.

Director Patty Jenkins knows the heart of Wonder Woman, and that’s apparent throughout both the first film and the sequel. But where her mark is most apparent is when Cheetah and Wonder Woman face off, knowing that if two women are to go head to head, it has to be about something worthy, like saving humanity. The battle between the two comes down to how you might view white feminism, which Wiig brilliantly explores with Cheetah. To me, Cheetah is the very embodiment of a white feminist, where the reason she feels she can do whatever she wants the second she gets a little bit of power is because she has been oppressed and terrified for her whole life. But much like reality, this is not the case, and if this is supposed to be the message, I have one big question: Where are the women of color? Where are the queer characters? Or better yet: Where is there any marginalized representation in this film?

Sure, there were background actors of all races and ethnicities peppered throughout the film (this is what my BIPOC critic friends and I like to call “bacon bits on an all-white salad”), but for modern audiences, that just isn’t good enough. In the entire 151 minutes of the sequel, there’s a noticeable lack of any featured performers of color. Yes, Pascal is Latinx, and that is and should be notable. However, I take umbrage when the reason his character turns evil is due to the mistreatment he faced growing up Latino—particularly when the original comic book character has been historically portrayed as white. In a scene that calls back to Maxwell’s past, we see how his being a poor, marginalized Latino male led to being overlooked, insulted and that never being given a chance to thrive caused him to want more money, more power, more of everything for his own son. Latinx representation is already rife with stereotypes, and creating a backstory that amounts to “Because this country mistreated me, I will make everyone pay,” just creates more ill-conceived notions about Latinos who all too often are only cast as traumatized immigrants, gang members, maids and criminals.

One might argue that Maxwell’s turn is a typical comic-book villain arc, but that just makes it more apparent on why it’s equally important to have writers, producers, and other creatives from diverse backgrounds on projects like Wonder Woman 1984 to translate how this might be perceived beyond the gaze of the white lens that has been applied all too often. A better way to have translated his wicked turn is to highlight his intelligence, his love of the world of possibilities and his undying love for his child and hope for more—everything that felt missing behind his anger and rage.

Is Wonder Woman 1984 entertaining? Sure, it’s fun, hits all the right superhero marks, and visually, the 1980-something world is a technicolor throwback to behold. But if our heroine is supposed to represent the good and hope for all humanity, one has to wonder who specifically this humanity is reserved for.

Wonder Woman 1984 will be available to stream on HBO Max on December 25. 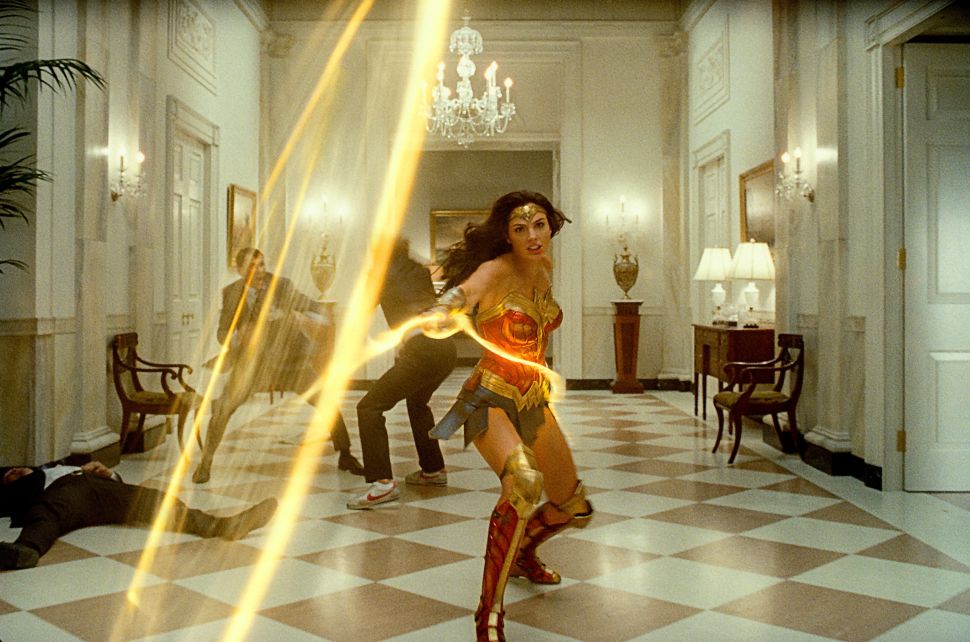