Are we alone? That’s one of the most fascinating questions in the universe, and yet no scientist is able to answer it. In fact, most astronomers have intentionally distanced themselves from work related to SETI, or search for extraterrestrial intelligence, either out of fear of being associated with pseudoscience or because they’re convinced that it’s a doomed cause… at least until someone else goes out on that intergalactic limb.

According to Avi Loeb, chair of Harvard University’s Astronomy Department, the search for alien life is not only a worthy cause, but one that guarantees success, statistically speaking. There are at least four billion sunlike stars in the Milky Way alone, and scientists estimate that half of them are surrounded by Earth-like planets that could harbor life. The mathematical odds are against us being alone, and if you want more tangible evidence, a piece of alien intelligence might have already visited us recently, per Loeb’s research.

On October 19, 2017, the Pan-STARRS1 telescope in Hawaii detected something strange in the sky: an object traveling at four times the average speed of an asteroid and moving in a trajectory unbound by the sun’s gravitational force alone. Observation data later revealed that the object came from the direction of Vega, a nearby star 25 light-years away from Earth, and intercepted our solar system’s orbital plane in early September. It made the closest approach to the sun on September 9. And, on October 7, it shot by Earth at a speed of nearly 60,000 miles per hour before moving toward the constellation Pegasus and the blackness beyond.

Astronomers had never seen anything like this before. Based on its unusual speed and trajectory, they concluded that it must be an interstellar object. It became known as ‘Oumuamua (pronounced “oh-mooah-mooah”), meaning “scout” in Hawaiian.

But what on earth was it? That’s where scientists’ opinions diverge. Loeb is unconvinced by most theories, leading him to this question: What if it was not natural at all but an artifact from an alien civilization? In his new book, Extraterrestrials: The First Sign of Intelligent Life Beyond Earth, the professor explains why this is a valid possibility and what the science community could do to find out.

Earlier this month, Observer interviewed Loeb about some of the most curious questions around ‘Oumuamua, the significance of the discovery and his frustration with the science community’s stubborn resistance to look for life beyond Earth. Below is an edited transcript of the interview.

Let’s talk about ‘Oumuamua first. What characteristics about this object make you convinced that it cannot be a natural occurrence?

It’s not like any object we’ve seen before. The brightness of ‘Oumuamua changes tenfold every 8 hours, meaning that its shape must be very extreme, its length at least five to ten times its width. It’s similar to what you’d see if you leave a razor-thin piece of paper tumbling in the wind.

In June 2018, it was reported that ‘Oumuamua exhibited an extra push away from the sun. The question is, what gave it this extra push? It couldn’t be the rocket effect from the tail of a comet, because we didn’t see any tail. I suggested that it might be the reflected sunlight that gave it the push, sort of like the sail on a boat. That’s the concept of a light sail. But for that to be the case, you’d need the object to be extremely thin, less than a millimeter thick. The problem is, nature doesn’t make these kinds of things.

Still, many scientists disagree with you. And even among themselves, there are different theories of what it might actually be. What are the main arguments out there?

First of all, there is a large community of mainstream people who simply ignore the anomalies. That, to me, is unfortunate. But among scientists who were responsible enough to attend to the details of ‘Oumuamua, some suggested that maybe it’s a hydrogen iceberg—a chunk of frozen hydrogen—in which case you would not see a gas tail even if it evaporates like a comet, because hydrogen is transparent. The problem with that hypothesis, however, is that we’ve never seen hydrogen icebergs. It’s very difficult to imagine how they’d form. I actually have a paper showing that hydrogen icebergs would evaporate very quickly as they go through interstellar space, so they could not have survived the journey from another star system to the solar system.

Another suggestion was that it’s a “dust bunny,” or a collection of dust particles. In that case, the dust would have to be very rarified and porous so that sunlight can reflect off it. You’d need an object the size of a football field that’s a hundred times less dense than air. I have a hard time imagining that such an object could survive the interstellar journey as well.

There was also a suggestion that it might be a fragment from the disruption of a bigger object by a star. The problem with that is that the chance of a big object passing close enough to a star so that it will be disrupted is very small. Even when it happens, you’d end up with fragments that are elongated, cigar-shaped. But ‘Oumuamua’s data show that it’s 90 percent likely to be flat, pancake-shaped, not cigar-shaped.

So, these are some of the suggestions in the literature. They all appeared to me less plausible than ‘Oumuamua being an artifact of alien technology. That’s why I still think it’s a very viable possibility.

What’s the significance of this discovery if your hypothesis is confirmed someday?

It’s extremely significant, because it would mean that we are not alone. So far we have no direct evidence of life on other planets. But I believe that we are probably not alone. And it’s not speculative at all. We already know that half of all sun-like stars have an Earth-like planet orbiting at roughly the same distance from the star. There are billions of such systems in the Milky Way galaxy alone, so if you roll the dice billions of times, what’s the chance that we are the only ones? Very small.

And actually I’m interested in the second question: If we are not alone, are we the smartest kid in the block? Probably not. If ‘Oumuamua is an object from an alien civilization, we can learn how advanced their technologies are and, if they don’t exist anymore, we can study why.

Stephen Hawking has famously warned against looking for alien life because he thinks it could put us in danger. Are you advocating for the opposite?

No. He was talking about whether to communicate and that we should listen but not speak. I completely agree with him on that. It was not a smart thing to do because we don’t know who is out there.

Isn’t it too late, though? NASA has sent five interstellar probes. And two of them (Voyager 1 and Voyager 2) have already reached interstellar space.

Oh yes. Actually we’ve been “speaking” for about a century by sending radio waves. By now, they’ve reached the distance of about 100 light-years. So anyone within that spherical void around us who has a radio telescope similar to the ones we have would know that we exist.

You mentioned in the book that the Pan-STARRS telescope that detected ‘Oumuamua was not advanced enough to find this kind of object until 2014. Does that mean we might have missed a lot of alien visitors in the past? Will there be more in the future?

The good news is that we will have a lot of opportunities to look more closely at these objects next time they come around. ‘Oumuamua is like the guest for dinner that had left the front door by the time you realized that it’s special. In three years, there will be a new survey telescope called the Vera C. Rubin Observatory that’s much more sensitive than Pan-STARRS. According to our calculation, it should detect at least one object like ‘Oumuamua every month.

There’s obviously a huge amount of interest in the search for ET from the public. The subject is heavily portrayed in pop culture, film and other science fiction. And yet, like you said, the mainstream science community has historically ignored SETI efforts. How do you reconcile these two contradicting facts?

First of all, I don’t like science fiction because they often violate the laws of physics and appear ridiculous to me. But that doesn’t preclude the subject from deserving a decent scientific study. Scientists should not care about what non-experts have said about these subjects. The point is that a lot of people want to know the answer and are willing to fund science to do that. How dare scientists refuse to take that task? I don’t understand.

You might think it’s conservatism. But I don’t think so. Given the fact that there are so many systems like the sun and Earth in the universe, I think the real conservative view would be to assume that alien life exists and actively look for signs.

If it’s not conservatism, where do you think the resistance comes from?

I remember attending a seminar about ‘Oumuamua with a colleague of mine a few years ago. When we left the room, he said, “This object is so weird, I wish it never existed.” That illustrated the symptom. Those people work on things they are familiar with for years. And when something unfamiliar comes along, they just don’t want it to be too different. That’s why I meet a lot of pushback and resistance.

But the most exciting things are discovered when you change your way of thinking. If you think about quantum mechanics that was forced upon us by experiments, that completely changed the foundation of physics, and we still don’t fully understand it. So, just because we feel uneasy about things that challenge our beliefs doesn’t mean we shouldn’t explore it.

Do you have any final messages to the science community or the next generation of physicists who might change the situation?

The astronomy community went through a lot of revolutions over the years. The most recent one is gravitational-wave astrophysics. Before that it was the discovery of exoplanets. In each of these cases, there was a lot of resistance to the change, and important discoveries were delayed because of that. And there was always someone who saved the day. In the case of LIGO, it was the administrators at the National Science Foundation (NSF) who saw the light and realized that it was special.

So, you have to fight an uphill battle if you want to make important changes in your field. The other thing to keep in mind is that reality doesn’t go away. We can all agree among ourselves that ‘Oumuamua is just a piece of rock and be happy with our ignorance. But it doesn’t matter. Science doesn’t care what we agree or disagree on. 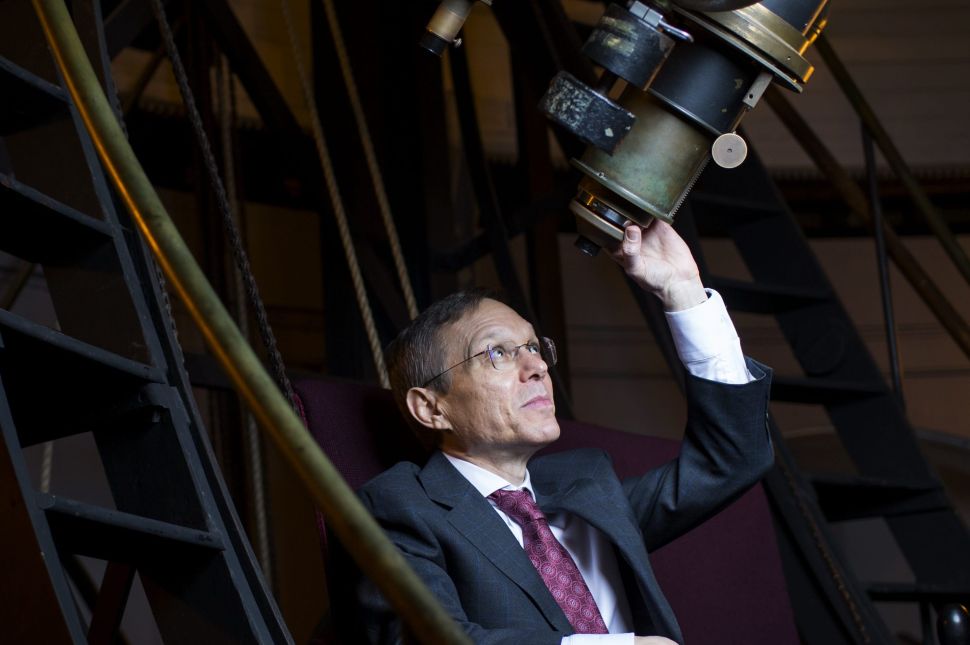