Using real-world imagery and events as inspiration for a fictional world is nothing new. George Lucas has repeatedly said that the evil Emperor in Star Wars was modeled after Richard Nixon, and Fullmetal Alchemist used imagery from the Iraq War in its depiction of the fictional Ishval Civil War. The zeitgeisty anime phenomenon Attack on Titan, based on the manga of the same name, is no different, having taken inspiration from Germanic imagery for its world since the show began, but when Season 3 appropriated imagery and lexicon we associate with the Axis powers of World War II and the Holocaust, it sparked outrage. Thankfully, it seems like the show’s fourth and final season is finally unwrapping its real-world imagery to reveal the show’s stance on its core theme.

After the huge revelation last season that there is a world beyond the walls of the show’s city-state settings, but it’s a world where Eldians, people with the same blood and ancestry as our main characters, are treated as inferior and penned in concentration camps, Attack on Titan’s final season pulls another surprise on the audience. The newest episodes throw us into the other side of the conflict and takes us to Marley, where we meet characters with the same Eldian heritage as our main characters, but who live and work under the oppression of Marley itself. These are the people we previously saw as monstrous villains, and the new season dares the audience to understand them.

The show is still heavily borrowing from WWII and Holocaust imagery to tell its story of the Eldian people’s subjugation. It’s hard not to think of Nazi soldiers marching when watching the Marleyan soldiers in the new opening sequence, a shot followed by flying war zeppelins and several exploding bombs. The Eldian people living in the Liberio internment zone, wearing armbands to identify themselves as Eldian, and there is a shot of Eldian soldiers in the Marleyan military doing a salute to their officers that looks like a Nazi salute. All of this can feel tremendously uncomfortable to watch in 2021, especially for a show that has in the past relished opportunities for hyperviolent action and explicit bloodshed. The backlash against Attack on Titan came down to a debate of whether the show’s sympathies would ultimately side with its oppressed or its oppressors, and the concern that it was co-opting fascist imagery from real-world history to demonize a fictional oppressed group, just as the Nazis did in the years leading up to the Holocaust. But as the story progresses in Season 4, the likelier it seems that manga creator Hajime Isayama is twisting these allegories to create a story that is familiar, but also completely new and complex that uses tropes and imagery ripped from history to make a broader statement about the toll bigotry and nationalism can take on people.

Sure, some of the imagery can be interpreted as reflecting real world politics, but depiction is not necessarily endorsement. You can interpret the portrayal of armbands and internment camps as mirroring the Holocaust in Europe, but the last couple of episodes that have been released through simulcasts on Crunchyroll, Hulu and Funimation have also invited another comparison: that the story of the historically aggressive and oppressive Eldian Empire collapsing under its weight and in turn becoming oppressed at the hands of another empire it once invaded mirrors the relationship between Japan and the United States during and after WWII. That we can’t really nail down a specific message speaks to the tone-deafness of the imagery being used, more so than the show articulating a clear and coherent message about our world.

Instead, the final season of Attack on Titan feels like a sort of reconstruction of everything the show did before. The first two episodes introduce us to a new cast of characters who feel like parallels of our main cast from previous seasons. Falco’s selflessness and optimism seem very much in line with Armin’s, while Gabi feels like a more upbeat version of Eren, and both are Eldians living in Marleyan internment. But after four seasons, both the show and the audience know not to trust stories of wide-eyed kids who want to save the world from monsters, because what the show does articulate clearly is they are more often than not just pawns in the political games of the powerful.

In the first half of Season 3, we learned that the Eldian leadership erased the memories of everyone on Paradis Island, where our main characters live, so that they wouldn’t find out about the outside world, killed anyone who dared question that false reality, and also sent thousands of people to be eaten by Titans—the grotesque humanoid creatures that gave the series its name—rather than letting them in on the truth. The Titans, who are actually a subset of Eldians, are deployed by Marley as weapons of war both on Paradis and abroad.

For Eldians like Falco and Gabi, their fight for survival comes from the constant fear of genocide. When they return from winning a war against a foreign nation, one of their friends questions what would happen to not only the Eldian soldiers, but the entire Eldian people if Titans lose their usefulness in battle, and he’s right to be asking himself that. After seeing the opposing army use heavy artillery to almost kill one of their Titans, we see Marleyan officers wonder if this is the end of Marley’s military might, because it all depends on their control of the Titans.

Eldians are already hated by the world for the horror the Titans historically inflicted, so if they exhaust their usefulness to Marley, there could be trouble. Even without the fear of extinction, the show makes it clear Marley has totally brainwashed Eldians into thinking of themselves as a self-loathing race of devils in order to fuel its own expansion politics. Marley wages never-ending wars while the government’s propaganda drills the idea that the Eldians need to pay for their ancestors’ sins by serving as Marley’s military force. In episode “Declaration of War,” it is revealed that Marley has always been secretly led by a family of Eldian nobles who created the idea of a Marleyan hero when in fact the end of the ancient Eldia-Marley war was orchestrated by Eldians themselves. This revelation is cut short, and rather than serve as an eye-opener for the people of the world, it is immediately followed by yet another declaration of war by Marley—another use of propaganda by an extreme nationalist regime to fuel the war machine that keeps it in power.

Trapped beneath this war machine are the kids who genuinely believe they are saving their people. In the first episode of the new season, Gabi is willing to jump into the line of fire to prove her worth as a soldier of Marley, while decrying her fellow Eldians on Paradis as a race of devils deserving extinction. In the second episode, after catching himself being critical of Marley, Falco quickly recites its pledge of allegiance in case anyone doubts his loyalty and kills his entire family.

Then there’s Reiner, the guy we knew as the man behind the inciting incident of Attack on Titan, and the death for our protagonist’s mother in the show’s very first episode. This season shows a side of Reiner we hadn’t seen before—the son, the cousin, the nephew. Hell, Reiner the hero to Gabi, Falco and the other kids who see him as the example of what an Eldian hero in Marley can be. Unlike the kids, however, Reiner has actually been to Paradis and is now aware of Marley’s lies, or at least appears to be aware of how pointless it all is.

In the second episode’s most poignant scene, which feels straight out of All Quiet on the Western Front‘s portrayal of misunderstood veterans, Reiner is asked at the dinner table to tell stories of what he experienced on the island. The monologue Reiner gives is framed like he was telling a horror story, but all he can muster to tell are clearly fond memories of his friends, repurposed to fuel the propaganda machine that paints all Eldians on Paradis Island as monsters. We’re not sure if his mother recoils because she knows Reiner is empathizing with the enemy or because she realizes that there may be regular people on the other side, and that’s the point.

Whether he’s actually showing sympathy or not, Reiner now knows Eren has as good a reason to hate him as he hated Eren before meeting him. Reiner knows the true devil is not a person, but an ideology, an invisible institution that spreads hate while growing in power off of it. And when he sees Eren for the first time in four years, he drops to the floor and asks Eren to kill him, because he knows this has all been his fault.

In its final season, Attack on Titan is slowly revealing what it’s been about all along. It’s not just that either side has good points, but that their stories are two sides of the same coin. Whether on Paradis or on Marley, both groups of Eldians are victims of a common enemy—institutions fueled by bigotry and hatred that brainwash people into judging an entire race of humans without knowing a single one of them. The show’s appropriation of real-life imagery with none of its cultural context still feels unnecessary and problematic, but it’s clear that the show is not drawing simplistic comparisons, or condoning what it’s portraying. Instead, Attack on Titan seems to be hinting at one last war, a war not against people, but against the systems of belief and idolatry that care only about power and play people against each other. 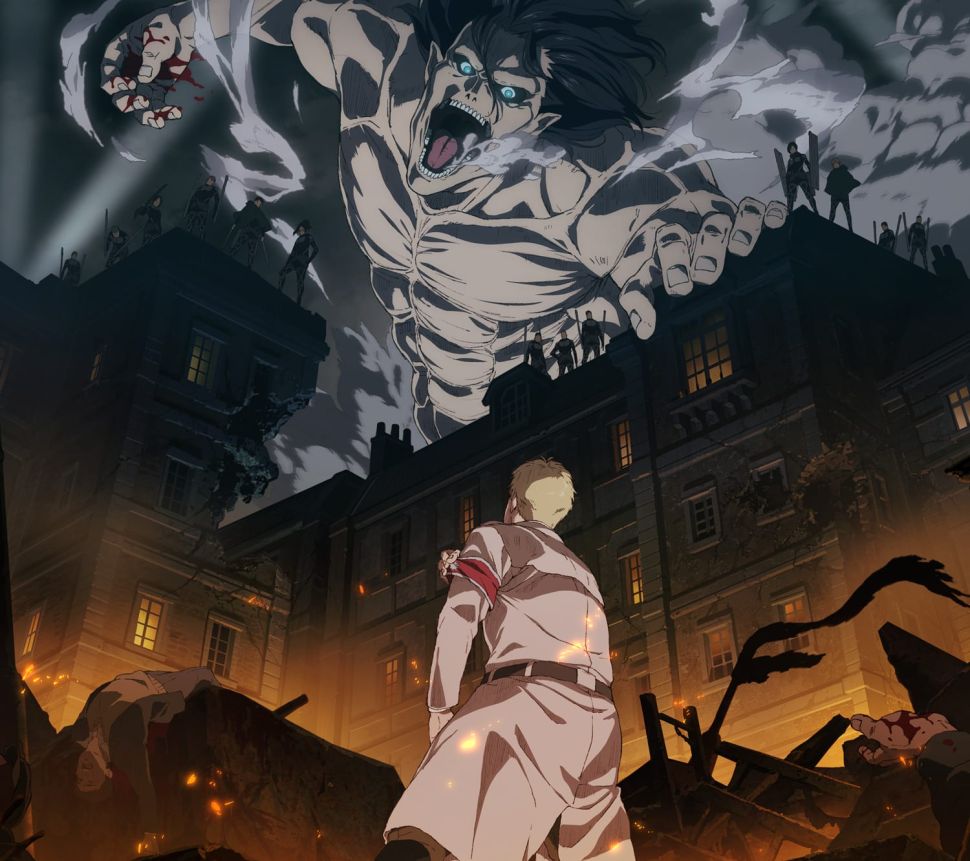