I love a good period drama just as much as the next fan of Pride and Prejudice or North & South, so when I saw the first promos for Bridgerton, a spark of interest went off in my head, but then I noticed the casting and knew I just might have issues with this show. After watching it, the concerns I had were unfortunately proven correct.

Produced by Shonda Rhimes under her company Shondaland and written by Chris Van Dusen (Scandal, Grey’s Anatomy), sex, scandals and family drama are to be expected, and they are delivered with the same flair and panache that existed during the Regency era. In this adaptation of the book series by Julia Quinn, gender roles, sexism, social status and the pressure of women to live their lives for their husbands and families are pushed to the forefront. Anyone who’s read a Jane Austen book will recognize the setup: as soon as a young lady is “of age” she must place herself on the marriage market in order to provide her new husband with an heir, and her family with one less mouth to feed, while also raising their status. But Bridgerton takes a more modern and open approach by giving its audience the thoughts of both men and women on these subjects. It’s not often we get the perspective of the young men tasked with carrying the weight of supporting a family while being pushed to make a new one through marriage.

For those reasons, I enjoyed the show very much. I love drama and shade with a witty double entendre tossed in. The production and the actors are all great in their roles, and the costume design is stunning. However, for all it’s finery, there are snags in the bright fabric of the show that I just can’t overlook, namely the negative stereotyping of its Black characters and colorism in the casting.

Bridgerton has been praised as a racially diverse show set in the Regency era, because having Black people in a big budget production period show—or film—about England before the 1900s feels like a foreign concept for white directors and writers, even though Black, South Asian, Asian and other people of color had been living there for hundreds of years as a result of mercantilism, and the monarchy’s colonization of over half the world.

You can’t say race isn’t of consequence when the world these characters inhabit was created in part through racism.

Having Black people in the main cast is all well and good because, historically, they should be there. But the problem in Bridgerton comes when the characters’ race is practically ignored for almost the entire show, except for a few vague references in their dialogue—using words like “us” and “them.” It’s disingenuous to say their race doesn’t matter in this world, when the most prominent and numerous people are white. If race truly didn’t matter, there would be an equal number of Black, Asian, Middle Eastern, Latinx etc. and white people represented in the show. But there aren’t, and the same goes for dialogue. The majority of the speaking roles belong to the white actors. The three Black characters with the most significant screen time are the male lead Simon (Regé-Jean Page), my favorite character Lady Dansbury (Adjoa Andoh) and Marina Thompson (Ruby Barker). (The fact that two of them are light-skinned is something we’ll get into in a bit.)

You can’t say race isn’t of consequence when the world these characters inhabit was created in part through racism. The money to build the show’s white row houses in Bath, the grand country estates and the palace came from the slave trade. Yes, slavery exists in this world, so how could race not matter? Having Black people strolling around in the background doesn’t erase that, and it’s not enough. It means that the topic is relevant and should be addressed accordingly.

Race matters when villainous story lines are given to Black characters. Consciously or not, Van Dusen’s creative team gave almost all of the Black characters with speaking lines negative attributes and beliefs that place them at odds with the white main characters.

Simon’s father, the Duke of Hastings (Richard Pepple) is verbally and emotionally abusive toward his son, creating a deep hatred between the two of them. Lord Hastings hated his son because he had a speech impediment making him unfit and undeserving of inheriting his titles. He berates and disowns Simon simply because he is disabled, which is extremely irresponsible and harmful messaging by the writers for a multitude of reasons. As a result of this, Simon decides he will not carry on the family line, which leads to his wife Daphne (Phoebe Dynevor) feeling betrayed, because she believed he couldn’t physically have children. Not only was Lord Hastings abusive, he was an absentee father as he preferred to live away from Simon. Not even his title prevents him from being written with the typical racist stereotype of being a Black man who abandons his child, and he’s not the only one; Marina’s father sent her to live with the Featherington family in exchange for a debt owed to him. (Side eye.)

The next villainous character is Marina, whose unexpected pregnancy for a boyfriend fighting in Spain has left her with no recourse but to marry a man willing to raise a child who is not his own. This isn’t the problem, as it’s something many young women who found themselves in this delicate position had to do in order to secure a position for themselves. The problem comes when Marina is set up as a schemer for wanting to marry Colin, the unsuspecting and much beloved young bachelor son of the Bridgerton family. When her deceit is exposed, Marina is shunned even by the Featheringtons and her so-called best friend Penelope, who turns out to be the most conniving character of the lot.

To pretend that Black people’s race and skin tone is of little to no significance in a setting where many who directly enriched themselves from the transatlantic slave trade are alive, is absurd and downright insulting.

Now let’s get into the colorism of it all, because, yes, that is a factor. The show’s two darkest male characters are either the Duke of Hastings, a father anyone would hate, or Will (Martins Imhangbe), a boxer whose only purpose was to serve as Simon’s unpaid therapist. In three brief scenes, the writers manage to frame Hastings as the worst person in the show, not only because of his actions toward Simon, but also toward Simon’s mother Lady Hastings, who is also light-skinned like her son. In the scene that introduces these characters to the audience, we watch her in absolute agony struggling to give birth, while he aggressively shouts, caring only about her giving him a male heir. To the servants and Lady Dansbury he’s a monster, and Lady Hastings is framed as the perfect wife and saint. Comments like that are reiterated a few times throughout the show.

Will’s contribution to the story ends when he throws a boxing match. Doing so is a dishonorable practice that usually results in death, a consequence proven by the death of Mr. Featherington who had convinced Will to do it so he could use the profits to pay off his gambling debts. But we aren’t even afforded the knowledge of whether Will meets the same unfortunate end, because once he stops being of use to Simon, he no longer matters to the show.

In the background, Black people show up pretty often—which again: not a problem—except that when it comes to servants, the only Black people are dark-skinned, including those in Queen Charlotte’s court. The two most powerful Black people in this show, one of whom is the male lead and love interest of the white female lead, are both light-skinned. This isn’t coincidental. It never is, because this plays into a common trend in media representation. It is accurate for Queen Charlotte to be portrayed light-skinned, as she was biracial, and is shown to have a light skin tone in historic portraits, but that doesn’t account for the show’s fictional characters. When it comes to casting Black people in certain roles, white people tend to go for the lighter side of the color palette because that’s who they’re most likely able to relate to. They see a light-skinned Black person—and non-Black POC—as being more desirable, especially when they have more Eurocentric features like looser, curlier hair, and narrower noses, and put them as leads. If you think I’m wrong, look up the Paper-Bag Test. It exists for a reason, and this cast is a prime example of that.

To many, my criticisms may seem like nitpicking, but to pretend that Black people’s race and skin tone is of little to no significance in a setting where many who directly enriched themselves from the transatlantic slave trade are alive, is absurd and downright insulting. Praising a show for casting a Black man in a highly coveted position within British aristocracy and ignoring what that means—when the show makes clear that the very reason he was able to inherit that position was because the queen bequeathed it to his father purely because he was Black—is frankly ridiculous. That Queen Charlotte did this as a way to stick it to the stuffy old white people who frown upon her marriage to the king, is a level of pettiness that I approve of, though.

When you think about it, is Bridgerton even that progressive? Showing an interracial relationship between a Black man and a young white woman is nothing new in 2020; just look at every other Shondaland production. But what about more romances between people of color? What about romances with dark-skinned women? Surely the inspiration Bridgerton takes from 1997’s Cinderella can’t be costume-deep. If producers are going to claim a production is progressive and has “color blind casting,” whatever that even means, its interacial relationships should at least be portrayed honestly and reflect more than just Black and white couples.

Bridgerton is available to stream on Netflix. 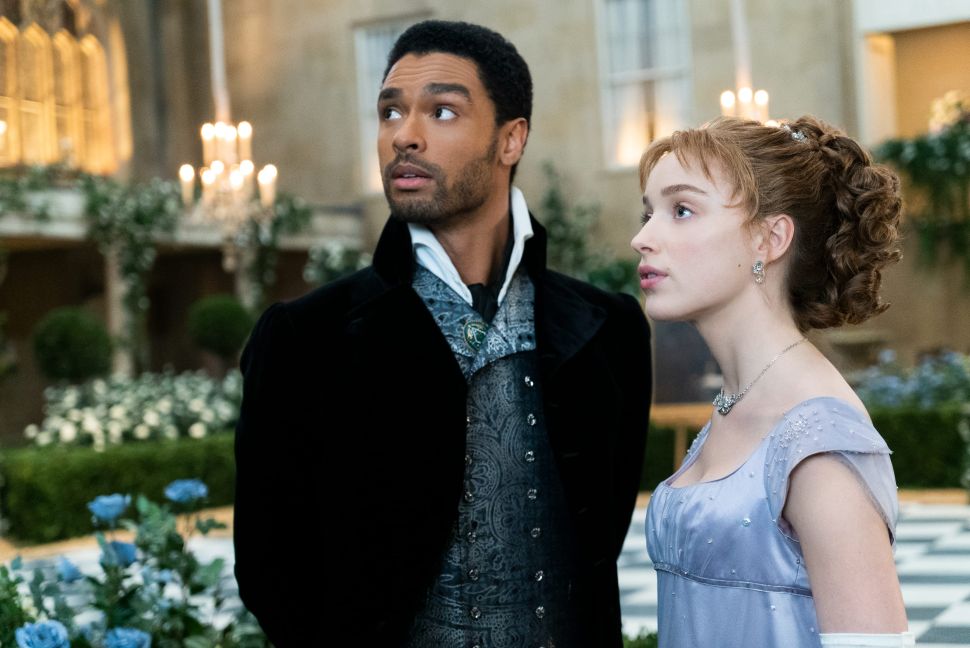