As everyone knows, the secret identity of Captain America is…Donald Trump?

Cap in the comics is supposed to be the alter ego of soldier Steve Rogers. But some of the fascist insurgents storming the Capitol building on 1/6 wore shirts depicting Trump as the star-spangled superhero. That’s not a one-off; Trump supporters have produced a good bit of Trump-as-Cap paraphernalia.

But at the same time, the Trump minions who have adopted Captain America have a point. The United States has a lot of ugliness in its history, and any symbol of America, however well intentioned, is going to be tainted by that ugliness. America isn’t just freedom, courage and egalitarianism. It’s also Trump and his racist forbearers—and any symbol of America is therefore going to have a bit of Trump in it, too.

Jack Kirby was a working-class Jewish kid who hated bullies. Captain America is often read, and with some reason, as a specifically Jewish response to a racist fascist threat that targeted Jewish people.

And yet, American ideas about heroism and Nazi ideas about heroism shared certain preconceptions, and you can see those, disturbingly, in Captain America too. Steve Rogers in the original comics was a weakling unfit for military service who volunteered for a military super soldier serum program. The story of an inferior specimen transformed into a blonde-haired, blue-eyed perfect specimen of manhood uneasily evokes Nazi doctrine about eugenic unfitness and Aryan perfection.

More than that, Steve is not himself Jewish, and is, inevitably, white.

I say “inevitably” because virtually all popular superheroes in the 1940s were white, like all American heroes at the time. To represent America at the dawn of the superhero, the hero had to be a white Christian man, because America, like Nazi Germany, believed in the physical and moral superiority of white Christian men. A superhero could hit Hitler on the cover of a comic book in the early 1940s only if that superhero shared a bunch of Hitler’s ideas about who was virile and heroic. It would take almost 30 years for there to be a mainstream Black superhero; Captain America’s sort-of partner, sort-of sidekick, the Falcon, created in 1969 by Stan Lee and Gene Colan.

Captain America, and America, were complicit in white supremacist ideology, which held that the best of America, and that the most super of heroes, had to be white. Nor are Trump supporters the first ones to recognize that Captain America is, in some unfortunate respects, on the side of an American Way that doesn’t have a lot to do with justice or truth. Comics creators over the years have frequently examined the downsides of America by examining the downsides of Cap’s legacy.

One of the most interesting and powerful Captain America comics is the 2003 miniseries Captain America: Red, White & Black, by writer Robert Morales and artist Kyle Baker. The comic is set in 1942, shortly after Steve Rogers has become Captain America, and the super soldier serum has been lost. In a plotline inspired by the racist Tuskegee syphilis experiments, a group of Black soldiers is ordered to be test subjects to rediscover the serum. They all die from hideous side-effects, except for Isaiah Bradley.

Bradley is ordered on a suicide mission to disrupt the Nazi’s own super-soldier efforts; for the mission, he steals a Captain America costume, which the army hasn’t allowed him to wear. After enduring many horrors, and succeeding, he returns to his own lines, where he’s arrested and put in solitary confinement for a decade. The super-soldier serum damages his brain, but the army won’t treat him. He ends up regressing to the mental capacity of a small child. America’s hatred of Black people means that the country won’t let Black people be heroes. When they try, it sets out to destroy them.

A more recent, better known, and more controversial storyline is the 2017 series and crossover Secret Empire, by writer Nick Spencer. In Secret Empire, the nefarious Nazi collaborator the Red Skull uses the reality-altering powers of a device called the Cosmic Cube to change history. He tweaks the past so  that Steve Rogers was recruited early in his life by the Nazi-like organization Hydra. Captain America therefore becomes the ultimate sleeper agent: a fascist plant at the heart of the United States. It’s as if masked American movie heroes didn’t start out fighting fascists, but instead sallying forth to commit racist murder—which of course is exactly what they did in The Birth of a Nation, the celebrated 1915 film which celebrates the Ku Klux Klan.

Both Red, White & Black and Secret Empire end on somewhat positive notes. In the first, Steve Rogers shows up to bring Bradley’s white supremacist American tormentors to justice and reassure readers that America isn’t like that any more. In the second, Cap is restored to his non-Hydra self. In comics or Hollywood films, you can fix America’s history of racism, fascism and hate with a few well-turned phrases and a deus ex machina or two. Not so much in real life.

None of this is to say that Captain America is really a white supremacist icon. Captain America isn’t really anything. He’s a symbol and a story, which can be used and abused in various ways by various people. He means what we want him to. Neal Kirby is doing a service by trying to wrest him from the grasping, small-fingered hands of the worst people on earth.

But Jim Crow is older than the Falcon, and racism is older than Captain America. Jack Kirby put a flag on his hero to fight for the best in this country. But it’s hard to reference the best without invoking other aspects of the nation as well. We have to do more than just assert that Trump isn’t Captain America. We need to create a better country than Jack Kirby’s, or than ours, if we don’t want Trump to wear that flag. 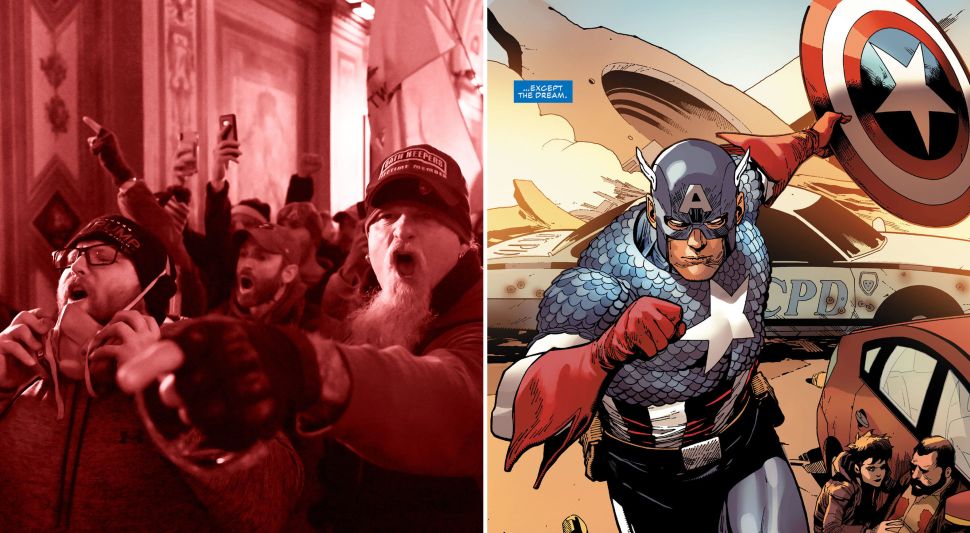