The naked human body has been depicted throughout all the eras in art. From the old masters’ nudes in renaissance paintings to the artists mastering the Zoom nude over lockdown, it seems there’s something that will forever be compelling to creators about our magnificently powerful and yet fragile forms. For London-based artist Daisy Collingridge, this form takes shape as “squishies.”

Collingridge’s first “squishy” human textile piece was born out of an interest in “pushing quilting to the absolute extreme.” “Quilting uses a layer of wadding sandwiched with other fabrics by stitch. I was investigating ways to make the relief in the striated pattern more pronounced,” she told Observer. “It was only when I saw the piece worn that the whole concept came together. She came to life. She owned it. She danced like no one was watching. I think this is an empowering message for everyone; to celebrate the human body.”

As a child, Collingridge’s home was full of fabrics, paints, wood, and thread. So much so that she says she still returns to it for certain projects. Gravitating towards fabric as her medium because of its accessibility, working with textiles soon became innate. “Despite this, I imagined when I grew up I would follow in the steps of the rest of my family and become a doctor, nurse, scientist or vet,” she says. “I ended up studying art at school, doing an art foundation and then a fashion design degree at Central St. Martins.”

Since graduating, Collingridge has used her practical skills in making to construct a number of “squishies.” Each of them, she says, takes months to make, constructing them in sections: headpiece, hands, feet, legs, and body. “I am quite impulsive when it comes to making. I don’t work from drawings, but I wear the pieces throughout the making process to check their mobility and flow,” she says. “I tend to make the head first. This will then dictate the personality and character of the final piece.”

Collingridge says she finds inspiration from painters like Lily Macrae and Caroline Coon, choreographers like Pina Bausch and Yoann Bourgeois, and sculptors like Paolo Puck. She also is inspired by bodybuilders and the fabric itself. “The way you can manipulate it through stitch, dye, embellishment to change the way it behaves,” she explains. If she’s stuck, she will always return to the craft of stitch. “Fabric offers up so many layers of meaning because it is a material we are so interlinked with, we all come into contact with our fabric second skin every day,” Collingridge says. She builds the shapes from layers of wadding and jersey, hand-dyes all of the fabric, then hand-stitched them together.

You’ll also usually find Collingridge herself in the suits, holding a remote that fires her camera. If not, she’ll occasionally drag her parents to wear the suits. The scenes, usually mattresses and soft furnishing, she says emphasize the tactile nature of the work. “The name ‘Squishies’ is an affectionate term I use which relates to the way people behave around them,” she says. “Because they are made from a soft fabric, people are drawn into to touch them because they are so irresistibly tactile. People also refer to them as ‘flesh suits’ which I quite like too.”

While many view the work as a statement or revolt against the idea of an “ideal body type,” Collingridge says that, for her, they are just a joyful representation of the human form. “The reaction to this work varies hugely. From this, I have learned that we all inhabit a body therefore we all have an opinion of equal validity,” she says. “Bodies are so unbelievably different despite being made from the same components. I am not seeking to promote or demote any one type of body. This work is bodily. There is warmth and softness, these signifiers of life. They celebrate flesh, form, touch, and movement.”

Collingridge started this year with the goal to work more collaboratively, which the pandemic made near impossible (also canceling her first solo show). Like many artists, however, she says she is naturally a solitary worker and still was productive alone in her studio space. She recently became part of the Sarabande foundation in London, a move that’s allowed her to begin working on a collaborative film project with Isabel Garett. They’re currently working on a short film detailing the life and loves of the Squishy family, meaning these joyous depictions of the human form will soon be getting a backstory. 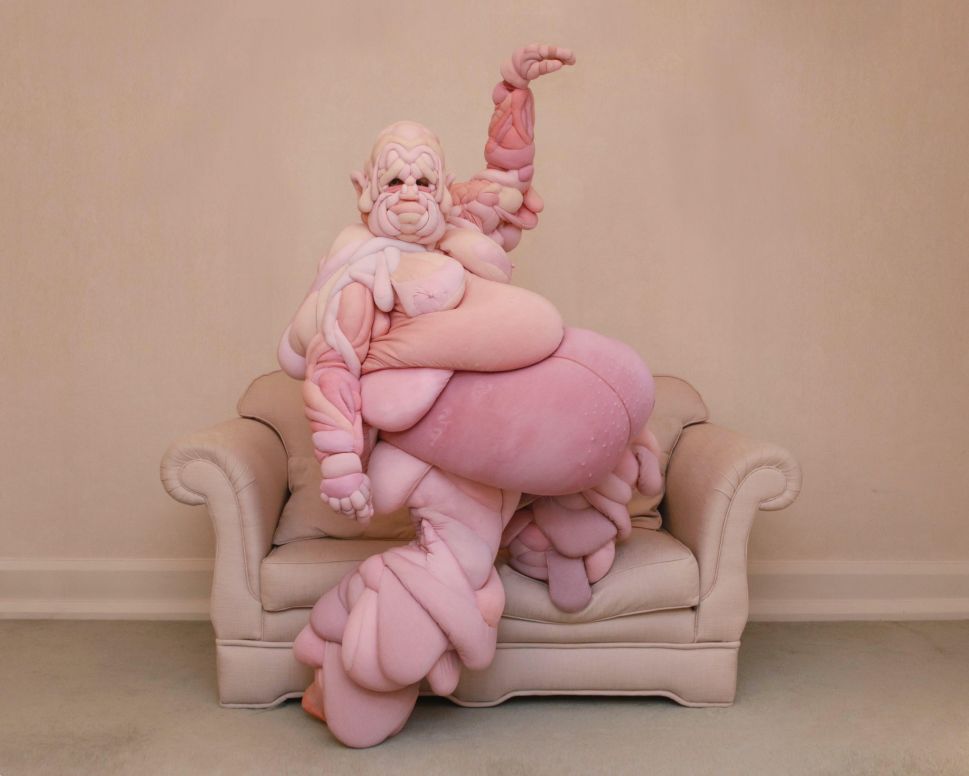