Isamu Noguchi is the beautiful youth, part Dionysus, part future of mankind: curly-headed, bare-armed, enthralling and cosmopolitan. Sidewalk cafes, cigarettes and haloes of cirrus smoke. He is the acolyte: at the altar of Constantin Brâncuși in the expatriate days of Paris; and, in prewar China and Japan, still propelled by a 1925 Guggenheim award, a student of traditional Japanese forms—brush drawing with Qi Baishi, and ceramics with Jinmatsu Uno. Then, he is the master himself, and then the fading divinity, alongside Martha Graham and John Cage and luminaries of mid-century avant-gardism, summering through The Festival dei Due Mondi in Spoleto, Italy.

Noguchi, born in 1904, was of a generation that endured the Spanish Flu, decades of global economic depressions, and two world wars. As an American, Noguchi came of age when the nation was alit with the Red Summer race riots of 1919, and the Suffragette movement, which gained the right to vote for women in 1920. If Noguchi’s generation was necessarily constrained by the armatures and mores of the nineteenth century, they were also wildly progressive, and sexually promiscuous by even today’s standards. They were the contradictions of rapid change: the roaring twenties, prohibition, economic catastrophe, and empire in decline.

Noguchi, as a sculptor, has as much range as his century: his technical skills allowed him to do just about anything, and his interests propelled him from politicized utilitarian (art is all / art for all), to Zen, to something close to pure abstraction. There isn’t one way to talk about Noguchi, but there is the cigarette, and there is the ashtray; on view now until May 30th 2021 at the Noguchi Museum in Long Island City, Queens New York, The Sculptor and the Ashtray presents a curiously succinct introduction to the artist. The cigarette, with its intersectional twentieth century identity—sex and war, sensuality and violence, indigenous tradition and manufactured experience—is proffered as a token of Noguchi’s materials, aesthetics, and concerns.

In renaissance paintings, an empty bowl at the corner of the scene or the still life will invite the viewer; and this is the empty ashtray to Noguchi. In 1944, the cigarette was on the lips of allied soldiers, Ingrid Bergman, and Humphrey Bogart; for Noguchi—also a smoker—the cigarette was not only culturally iconic but a memory of youth: smart talk over cocktails and a husky-voiced cabaret singer and a last smoke, past midnight, with the person beside you in the sheets. Friends with architect/inventor/futurist extraordinaire Buckminster Fuller, and fascinated by modern manufacturing, Noguchi saw the invitation of the ashtray, simultaneously, as one of creative challenge and fabulous wealth. He would make the perfect ashtray, and every desk, every meeting-room table, every college classroom, every nightstand by the bed, every airport lounge would be outfitted; to Noguchi, art was everywhere, and so would be his ashtray.

Noguchi’s first decided design was a simple glass form, a circle in a circle—sort of a concave jellyfish. The object was beautiful, seductive and sellable, and ultimately rejected by Noguchi, who saw it as a “rehash of every stupid conventional ashtray in the world.” In an abrupt departure from the biomorphic contours of Noguchi’s glass ashtray (as well as the plaster prototypes that preceded it), Noguchi produced “an American expression of the machine age.” The ashtray, which uncannily resembled an archetypical box of bullets (a square of 25), promised total, unthinking efficiency, and easy cleaning. The cigarettes could be placed this way or that, and extinguished between the bullets, and the disassembled object could be washed in the sink. Noguchi pitched it to Fuller for Fuller’s “Dymaxion” line (dynamic, maximum, tension). Fuller politely deferred, as did the other outlets that Noguchi approached. The consensus was that the manufacturing of the device would be overly expensive; the dymaxion ashtray was too complicated. But also, the bullet ashtray was a miss; Noguchi, overwhelmed by history, had produced an exquisite iteration of mid-century horror.

By the end of 1945, Noguchi would disparage his notion of an ashtray ascendance; how could he have ever thought he would earn “an income from such a silly trinket like an ashtray”? Through the whole debacle, in his typical opaque manner, Noguchi resisted disclosing the obvious appeals of the ashtray, The cigarette was a contemporary tea ceremony—and the chance to use traditional Japanese materials, like ceramics or glass, in the context of modern manufacturing. The ashtray offered transformative emphasis of a symbol that, through the roaring twenties and prohibition and flappers and a wave of print advertising, had come to equate with the new century; the cigarette was dancing and sexual liberation, strong women with short hair, and something less gendered, more androgynous, that was kissing us from only a moment into the future. The ashtray, swirling in drunken vision, was the circling hips and torso of a Martha Graham dance; and the ashtray was the stage prop of any conversation, any contemplation—after three decades and twenty-plus sets for Graham, Noguchi was now designing for all the world and its players. Noguchi, who had already created the first prototype of the Noguchi table, and who would, in 1951, introduce his “Akari” lanterns, was in every way the visionary to bring about a millennium ashtray. 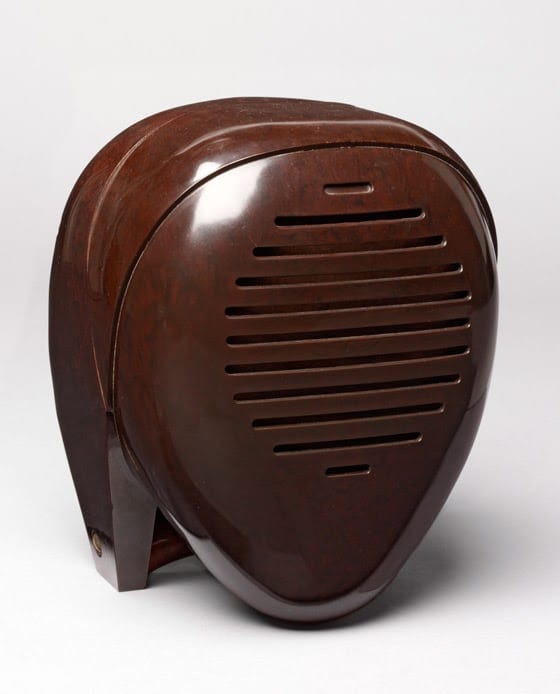 But Noguchi was in the moment: June 6, 1944, and the allies were gaining momentum. Hitler had eschewed smoking since the 1930s, believing that the practice was addictive, unhealthy and degenerate. Mussolini, though a smoker, was called out by Hitler as another strong leader who rejected the cigarette, and a craze of caricatured Hitler and Mussolini ashtrays was the allied response. (The Mussolini ashtray is pictured in Mix’s mockup.) With Victory in Europe, perhaps Noguchi saw or intuited the ashtray as a trophy of military and social triumph. But the sentiment is strained; Noguchi was “self-interred” in a Japanese war camp in Arizona. In the months after the Japanese attack on Pearl Harbor, Noguchi volunteered to live in confinement, and in May 1942, he arrived on site at the Poston War Relocation Center in Arizona. Despite his privileged treatment, Noguchi tried to unvolunteer after two months, and only managed to vacate, on a thirty-day pass, in November. (He did not return.) And the dymaxion ashtray, while totemic of victory, is sour-faced. It’s fair to argue that any of Noguchi’s ashtray designs, properly promoted and branded, could have found favor in the marketplace, even the dymaxion. But it’s just as fair to note that the dymaxion ashtray, as a box of bullets, has the unfortunate quality of inversion. Customarily, in a box of pistol rounds, the nose of the bullet is set downward, but in the dymaxion, the bullets are pointed up—meaning to say, the bullets are pointed at you.

In his later years, Noguchi didn’t seem to be much more than a casual smoker. But one can’t help but ask if smoking had anything to do with the pneumonia and heart failure that took his life in 1988 (he was 84). In twenty-first century retrospect, all ashtrays are memento mori, and Noguchi’s dymaxion astray is paradigmatic: a Russian Roulette of cancer. A cynic might comment that regardless of his nonstarter status as an ashtray baron, Noguchi just kept making ashtrays, that many of his works, in playgrounds, in ponds, in elements, were just big ashtrays. Really, the inverse is true: Noguchi sought to bring his deep empathy and humanism to the ashtray, to celebrate, maybe, but also to forgive this most unforgivable of objects, this great ornament of vanity and self-destruction.

On view at the exhibition, a scene from Noguchi’s Long Island City studio is recreated from a 1964 photograph. The artist’s table (of his own design) is set with just a few objects. Among them, there is Bruno Manari’s “Cubo” ashtray, a kind of pint-size sepulcher, as well as Noguchi’s final answer: natural, inevitable, and deftly suited to its task. 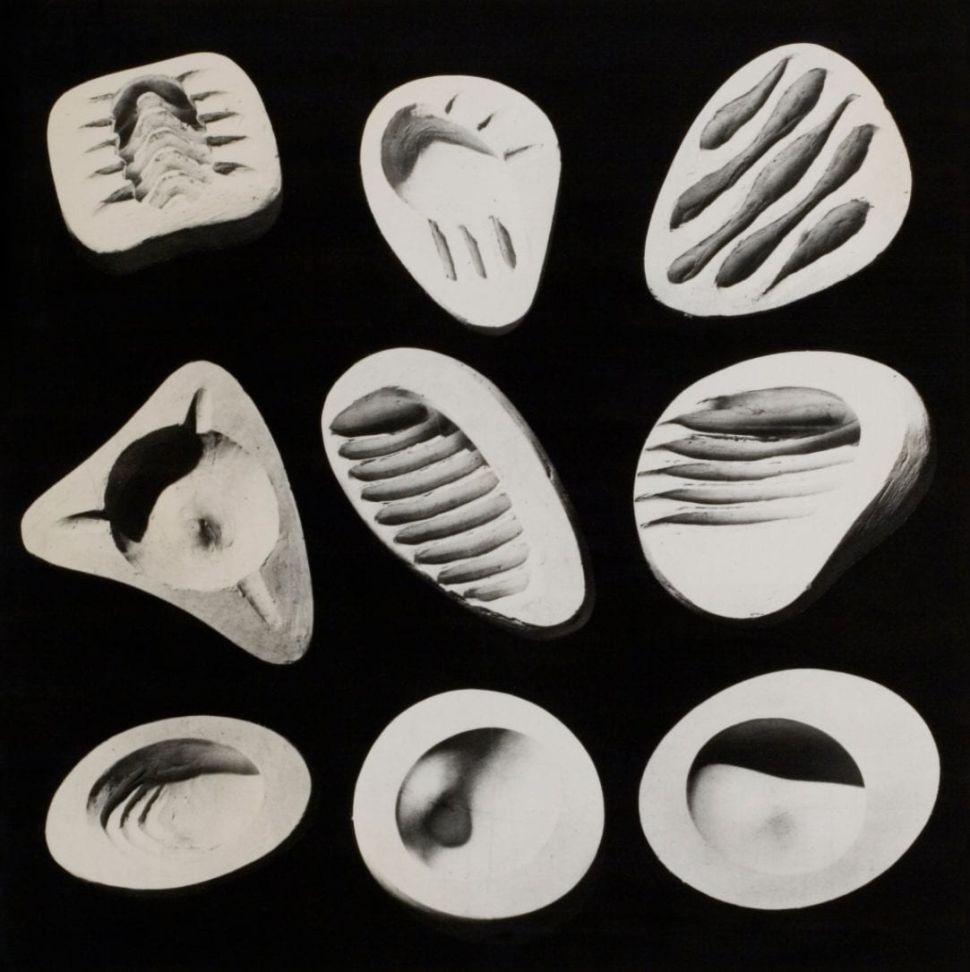