Few Indian filmmakers have created as big a splash in recent years as Lijo Jose Pellissery. His fifth and sixth Malayalam-language features, gangster saga Angamaly Diaries (2017) and religious satire Ee.Ma.Yau (2018) burst through the country’s regional cinema scene like a sugar rush, and showcased the director’s penchant for political storytelling infused with idiosyncratic energy (they’re available on Netflix and Amazon Prime respectively). His seventh film, Jalikattu, is India’s Best International Feature submission to the upcoming 93rd Academy Awards. But even without that distinction, the film proves to be Pellissery’s finest work till date, an uproarious saga of an escaped buffalo wreaking havoc in a tiny Kerala village, and the human furor unleashed in the process.

The premise sounds farcical at first, but few directors can immerse audiences into their worlds as quickly as Pellissery (not to mention, as effectively). The opening minutes of his films tend to be wrapped in pulsating rhythms, and weave vivid tapestries of time, place and mood. The introduction to Angamaly Diaries, for instance, yanked viewers into the daily hustle and bustle of its titular locale without apology. The opening to Jallikattu both follows suit and plays like an absurd prequel, with an extended montage of dozens of villagers opening their eyes before daybreak, as if summoned by mysterious music or something unspoken in the ether. The percussion-heavy score by Prashant Pillai enraptures, at first with bare-bones echoes of ticking clocks and sharp waking breaths, before growing and taking on folkloric energy rife with chants, yelps and claps, as the montage finds itself interrupted by extreme closeups of nature.

Prior to anything resembling plot, the film establishes its key juxtaposing facets — humanity and nature, two forces set against each other — before tumbling headfirst into a rollicking tale of their inevitable clash, in both intense and side-splitting fashion. To call Jallikattu a comedy-thriller would feel apt, and yet, not nearly descriptive enough; it’s far more spiritual than that.

Adapted for the screen by R. Jayakumar (from the short story Maoist by S. Hareesh), the film takes its title from the controversial bull-wrangling celebration during the Pongal festival in Tamil Nadu, Kerala’s neighboring southern state. No such festival appears in the film, but the villagers’ attempts to capture the beast soon grow from a matter of logistical convenience — the buffalo, after evading slaughter, begins rampaging through their crops — to an act of zealotry. It’s a “man vs. nature” tale á la Jurassic Park, about humanity’s attempts to exert control over the natural world. Only Jallikattu denies its sprawling ensemble any semblance of humility or growth. The result is an intentionally graceless film, whose finesse comes not through poignant self-reflection, but through sheer, unimpeded visual chaos.

The cast of characters, led by demure local butcher Antony (Antony Varghese), lead an array of different lives. Their professions range from farmer to police to politician, but they’re all connected through the rituals of food. Everyone, directly or indirectly, comes into contact with Antony and his ilk, who we see killing buffaloes and preparing their meat for sale with the same casual, routine energy as the villagers waking up. The people have total dominion over the animal kingdom, a position in the food chain they seem to take for granted — to the point that when one of Antony’s buffaloes escapes at dawn, the locale’s harmony is interrupted, not only by the trampling beast, but by egos let loose in similar fashion.

People begin finding any excuse to blame not only the creature, but Antony, and others around them (especially those beneath them on the social ladder). They see this inconvenience as a slight against the delicate sense of order to which they’ve grown accustomed. This flimsy harmony is something several men claim their fathers or ancestors were responsible for when they put up roots in the village, but these discussions of lineage have a secondary implication. Go back far enough, and everyone is an outsider to this lush, natural landscape, even though they each claim, as their birthright, the social order laid down by men.

The escaped buffalo doesn’t so much throw the town into novel chaos as it simply reveals social discord lying in wait. As if incensed by the situation, one man even takes his frustrations out on his wife and slaps her for daring to prepare the same meal as the previous day. The feral creature acts as both a physical and metaphysical catalyst, with Pellissery filming it as if it were some unseen, godlike being — or perhaps being ridden by Yama, the Hindu God of death, who is often depicted riding a buffalo — toppling trees and setting piles of grain ablaze, as the fluid camera and the frantic villagers barely catch a glimpse of it. The film feels as if it could take some overtly supernatural turn at any moment, though when the buffalo ends up being, well, just another buffalo (and the film finally presents the animal as completely ordinary), the onus of the film’s uncanny, off-kilter fabric soon shifts to the dozens of men giving chase.

The mere presence of a creature defying man’s domain — even unwittingly — is a spiritual castration.

They start out as a tiny group whose squabbles prevent them from lassoing the creature, but soon, each man’s waning sense of masculine self-worth begins to explode, and the group seems to bloat in size the longer it remains in pursuit. It picks up more and more men along the way, like a snowball tumbling downhill, as each new member grasps for an opportunity to prove himself and re-assert his dominance in the established order. The mere presence of a creature defying man’s domain — even unwittingly — is a spiritual castration.

While the women of the village choose to sit out the day-long chase, the men quite literally stumble over one another for a glimpse at the beast and an opportunity to catch it. Pellissery’s approach to groups of people in motion rivals even that of Bong Joon-ho, and his controlled chaos in films like The Host, Snowpiercer and Okja. If the latter comes to mind when reading about Jallikattu, it’s only because Bong’s empathetic tale of a genetically enhanced bovine shares surface similarities with Pellisery’s film. Jallikattu doesn’t so much have veganism on its mind as it does the souls of men and their need to control the world around them.

The film rarely follows a single story thread for more than a few minutes, though it isn’t nearly as interested in individual tales as it is in the amoebic mass that is the village itself — a stand-in for society at large. The most prominent subplot surrounds the arrival of a former village resident, the smuggler Kuttachan (Sabumon Abdusamad), who was ratted out to the cops by Antony and who stands-in for a direct, immediate antagonist to the butcher. Kuttachan hopes to shoot the buffalo and leave it for dead, while protagonist Antony hopes to recover his property and slaughter it for sale, but this ideological difference between them is nominal at best. The result, either way, is a creature killed and a thirst for violence quenched.

Throughout the film, several men who enter the group as it moves through the village seem to establish and then immediately abandon their philosophies. Notably, a sweet old man politely implores the group to let nature run its course, and to leave the creature alone — that is, until the buffalo tramples his crops, which turns him hot-headed, foul-mouthed and bloodthirsty within seconds. By the time the film reaches its staggering climax, the only principle that seems to matter is self-interest, even at the cost of self-preservation, an idea the film pummels the viewer with during its audaciously on-the-nose epilogue, tying the village’s present directly to its past.

The film’s zany conclusion would’ve felt out of place in a more straightforward film. However, en route to this point, the usually up-close-and-personal camera has no choice but to pull back in order to capture the film’s widening visual scope, as Pellissery and cinematographer Gireesh Gangadharan trade their realistic approach to people in motion for a haunting, abstract fresco of human frenzy. The result is breathtaking, jaw-dropping and hilarious all at once, a series of final images which the screen can barely contain, and are sure to burn themselves into the viewer’s subconscious.

While the film makes many-a passing reference to the economics of the village and its disdain for the local police, Jallikattu is far less a political screed, and far more a depiction of the human soul and its corruption in real-time. The film spans about a day and runs a mere 90-minutes, but in that time, it undergoes a stunning metamorphosis, from a naturalistic depiction of rural Kerala to a winking, expressionistic nightmare, in which chaotic and often fiery imagery, first attributed to the animal, begins to reappear in delightfully shocking new permutations, and with new culprits to blame. This transformation, and its operatic crescendo, make up one of the most ludicrously enjoyable cinematic experiences of the year.

Jallikattu is available to stream on Amazon Prime. 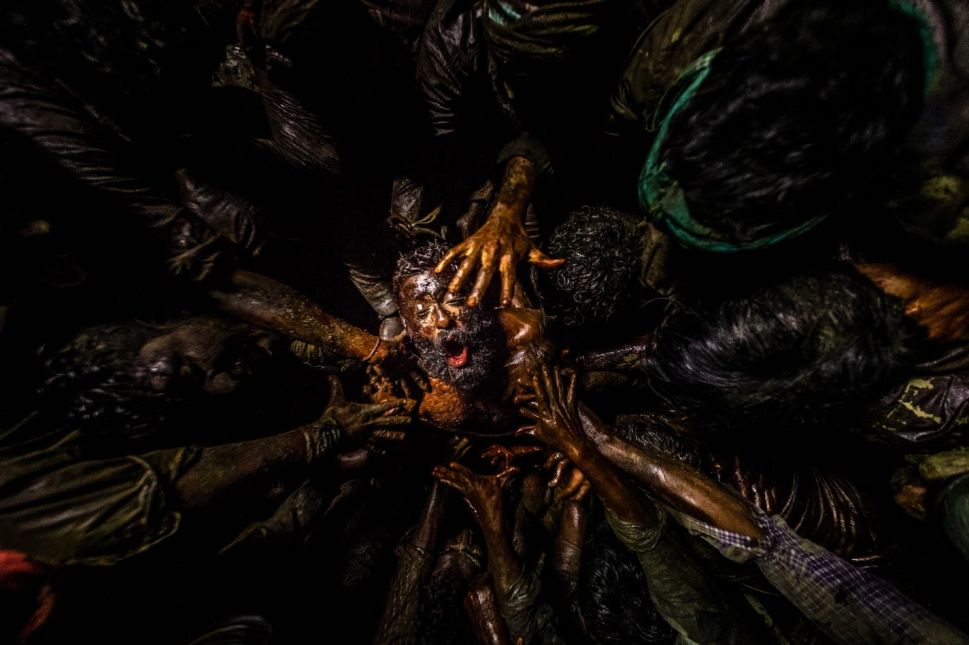