Can two traumatized, neurotic trans people build and maintain a relationship? Detransition, Baby is a love story, a classic tale about how to build a family. It’s a huge, funny, heartbreaking romp of a book. It is also this year’s State of Queerness novel. Every year or so the publishing industry decides it’s time to give the gays everything they want: in one book only. Last year we were given Garth Greenwell’s Cleanness and the year before that there was Ocean Vuong’s incredibly successful novel On Earth We’re Briefly Gorgeous. This is an exaggeration, of course, and Detransition, Baby is about much more than gender, but the publishing industry’s refusal to grant a longer list of queer and trans novels is something we should all relish the chance to point out.

Torrey Peters has been writing fiction for years, but Detransition, Baby marks her breakthrough moment into the ‘mainstream’ literary scene. A few years ago I saw Peters read from an incredible novella that she had published online. Writer Harron Walker has incisively chronicled Peters’ ambiguous relationship with self-publishing. Vulture has written Peters’ biography and theorist Sarah Schulman’s appraisal of the book. Peters, during the virtual Books Are Magic-sponsored launch for Detransition, Baby, described the book as a sort of trans Fleabag.

I didn’t want to start this review with “as a trans girl…” So I didn’t. I moved it down a few paragraphs. Books like this make it nearly impossible to divorce the personal from the page. There were many moments during the book I stopped reading to send a friend a voice memo to work through my own thoughts. Many mainstream publications seem to be scrambling to find a trans person to review the novel on spec.

The copy for Detransition, Baby notes that the novel follows three women, trans and cis, and their attempts to raise a child together. This is, in part, intentionally misleading. We follow three characters (although one only through the other two) and one of them is a man. Or, perhaps not a man, but a person who has detransitioned from life as a trans woman.

The novel primarily follows Reese, a trans woman and Ames, Reese’s ex who has detransitioned and gotten his cis, straight boss Katrina pregnant. Ames attempts to sell Reese and Katrina on the idea that the three of them raise the child together as a queer family. Reese and Ames are clearly neurotic.

The novel takes a lot of stabs at explaining both Trans 101 and trans embodiment. In this way it has an appeal to both straight people and for trans people in its poignant moments of, as one character describes it, “gender-feels.” This is a strength and soft spot for the novel. Its characters think. A lot. Much of the book comes from Ames or Reese shadowboxing with each other or their parents over issues of gender, embodiment, love, capitalism, and race. Sometimes it can feel like the book wants to tackle every issue. But this is also, admittedly, what it can feel like to be a trans person today. Everyone has a take. And everyone thinks theirs is right. In this way, Reese and Ames are typical and even beautifully drawn.

Still, the best moments of the novel are moments where the characters set something aside in order to let themselves feel something. While both Reese and Ames can explain their lives very well, neither wants to cop to the consequences or weight of their actions. Near the end of the novel Ames has an epiphany after a friend of his engages him in a somatic exercise. Ames is surprised his friend, a cis straight man, knows the word somatic.

Peters is incredibly insightful. Through her characters she is able to espouse and challenge many contemporary trans issues. Through Reese, Ames, and others Peters covers the idea of trans lineage, the difference between being a white trans girl and a black trans girl, Sex and the City, Oppression Olympics, “consent or whatever,” assigning pathology to someone you don’t like, baby transes, class, trans funerals as social events, and emotional labor all in a thick haze of irony and sincerity in equal measure. Pop culture often shows up to illustrate complex moral ideas-whether literally appearances by Sarah Jessica Parker and Madonna or hilarious, quotable moments.

One such moment is when Reese has a lengthy inner monologue about being hit. The take on being hit and womanhood will certainly polarize readers. It ends with a timely punchline about Lana Del Rey.

Ultimately there is a witty and painful cynicism to the way Reese (and many other characters) are unable to give up certain ideology in order to live in the moment they are given. The novel suggests the trauma and pain of transition can, like divorce, harden or soften our openness to the world. The most beautiful moments of the novel are when characters are able to either lift the veil and see beyond their stumbling blocks or let themselves collapse fully into their pain. More than one character sees through the gender presentation of another trans person and discusses the cracks in their ability to pass.

Reese and Katrina have many beautiful moments discussing motherhood and what raising a baby as a nontraditional family would look like. There’s a lovely scene following the two women in a baby store arguing over a crib. Katrina, ultimately, is one the few characters to try and draw boundaries for her life, thus driving much of the twisty narrative. At times she is open to the idea of challenging heteronormativity and at times she seems to miss the point. Katrina’s mom provides a wonderful, thoughtful counterpoint and adds another intergenerational mother figure that many of the characters sorely lack- and for good reason. Reese and Ames’ parents come up at times, but mostly as phantoms.

Reese ultimately is frustrated by the idea of being Mommy Reese, and not just Mommy. “Which of us do you think will be the mommy with no need of a qualifier?” she asks Katrina. This moment is a jolt of pain and recognition. For trans people, often language falls apart in hands. I have many friends who whether through dating or parenting strain to create new words or rework old ones.

In one chapter of the novel, Ames discusses a key turning point in transitioning. The moment one looks back and sees all the old armor and coping mechanisms they used to not stick out as a kid. In one quick moment, while doing poppers, this facade falls. He knows he will have to create new coping mechanisms and a new life. This is a profound moment for a book to hold, a profoundly sad and holy thing to provide space for in fiction. Perhaps, and to pull a Reese and make it about me, reading Ames feel this moment was a moment of recognition for me. There’s no going back. Until, of course, one chooses to. 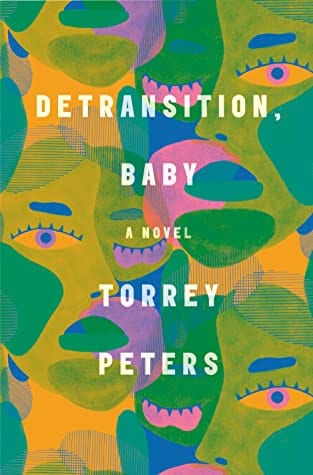