Located on Henry Street in the Chinatown neighborhood of Manhattan is M 2 3 Projects. The gallery space seems to hide in plain sight of other businesses around it and if it weren’t for its frosted windows and front door, it would be easy to miss. However, on a recent gallery trip downtown, a friend and I happened upon the space and were pleasantly surprised by what we saw.

M 2 3’s latest exhibition eddy is deceptively complex. The exhibition’s title, eddy, literally means a spiral, a small vortex, which spins counter to and disrupts the current of the ten works by the five artists that were meticulously curated. eddy features the works of Daniel Klaas Beckwith, Clare Koury, Quay Quinn Wolf, Vladislav Markov, and Tenant of Culture. The work is meant to act as a disruption in the gallery space but also more broadly in the world right now with a very specific meaning. The show features a range of work that is both nodding to the minimalist and conceptual art schools of the 1960s but is reconfiguring it for this contemporary moment. With much of the work featured in this exhibit created in 2020, each of these artists’ larger comments on the pandemic seem intrinsically tied to it along with other sociocultural references.

As you enter the gallery space the first piece you encounter is Environmental Threat by Daniel Klaas Beckwith. However, it may take a few minutes for you to find it. The installation consists of silk, polyester and metal pins placed on the gallery wall and ceiling hovering roughly above the floor. Reminiscent of a spider’s web, Klass Beckwith has spelled out the phrase “Do you wish to continue?” Referencing gaming culture, this phrase is often encountered when playing video games. However, in this current moment of social and political upheaval in the US, and as the COVID pandemic rages into its tenth month, Beckwith’s question feels even more pertinent.

Environmental Threat gives pause in more than one way. The piece is elegant and taps into a larger ethos of the exhibition. It first has to be located, then you have to figure out what it says, and are forced to confront the larger question that is posed. Klass Beckwith seems to be playing with the framework of things whereas Clare Koury has created several works that are working directly with equipment and machinery parts in a way that is ingenious and utilitarian. Feast of the Ascension  is mounted to the wall and is filled with an array of comical items ranging from track lights, kernels of corn, to Cosmic brownies, a popular childhood chocolate brownies peppered with multicolored candy bits. Part nostalgic and part function, Koury’s work is drawing on this tension while also referencing the absurd and her personal biography.

Another by Koury titled Panic Bars, uses panic bars and hardware and is installed on the gallery wall. These bars can be found in any standard door design, however this configuration where they are displayed on the wall with hardware exposed gives a new context. The work has a larger social relevance and there is an urgency to it. It is encapsulating the social climate but is also pointing to a larger disruption and context while maintaining the function of hardware in a new way.

Try to Relax by Quay Quinn Wolf is another unexpected work that is taking on a complex subject matter and is recontextualizing the objects it was made with. Using chrome hospital bed side rails that have been fashioned together with steel zip ties as well as a custom strap resembling a seat belt, the assemblage is fusing together several items while also deconstructing them in the process. The piece is clever in its construction and through reconfiguring the meaning of them and the subject matter of the show. The stainless steel zip ties give the piece an elegant flair but also play with the hardness of the side rails and the malleable way they have been wrapped.

The piece also features a healing crystal that has been strategically placed on it. Finding creates a scenario that is a bit like a scavenger hunt for the viewer as they scan the piece and its the objects it is made up of to locate the crystal. It also takes on a deeper meaning with the events on January 6th that unfolded at the Capitol with reports of armed insurrectionists who brought plastic zip ties. This play between hard and soft materials is also something the Wolf has come to be known for over the last several years.

eddy is showcasing a group of five very promising young artists, several of which have already established themselves within the art world, while also offering a larger social commentary for this time period. The show is fused around larger themes of disruption but the thread throughout the whole show is how each of these works is helping to expose larger gaps in an effort to bring attention to them overall. As a conceptual framework the larger purpose and disruptions that occur on large and small scales through the materials used and the subject matter being explored helps to further parse this tension. 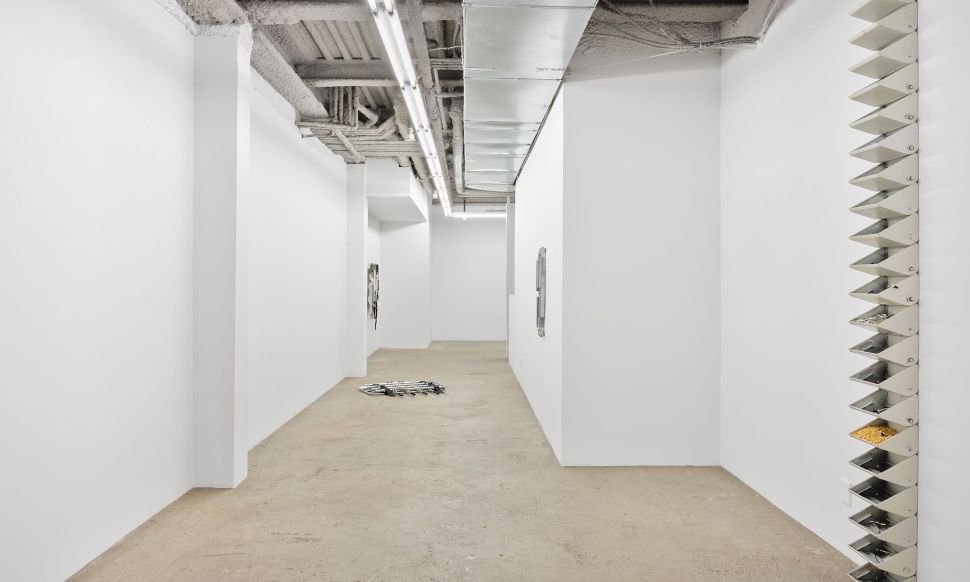