In August 2020, the Art123 Gallery in Gallup, New Mexico debuted a show titled The April Show in August which featured two massive works by Matthew Bollinger titled Missing, Murdered, Indigenous I & II. These works utilized an incredibly time-consuming technique. To create pixelated portraits, Bollinger drew small lines on vintage black and white photographs and layered hundreds of them to create silhouettes in honor of women who have gone missing from Indigenous reservations across the United States.

Bollinger is no stranger to planning multifaceted work. A Denver native, Bollinger studied Architecture at the University of New Mexico. After a benign decision to take a drawing class, Bollinger was introduced to the world of fine art. Bollinger has exhibited his work nationally and currently teaches at Diné College, a tribally controlled institution serving Navajo Nation in Tsaile, Arizona.

These Missing, Murdered, Indigenous pieces are the beginning of an expansive series to open the conversation about the disparity of crimes solved on tribal land and the women who bear the consequences. Observer spoke with Bollinger from his home in Albuquerque about his experience teaching on Navajo Nation and the moment in 2020 that gave way to creating these works of art.

Observer: There is a romantic notion that an artist can sit down at a canvas and create a finished piece in a single day. Thus, there is a disconnect for many viewers to register the amount of time it takes to complete a finished piece of art. This series spoke to me because I can see the time necessary to source the photographs, draw on them, layer them, etc. How did you even begin to conceptualize the process for these pieces?

Matthew Bollinger: The Missing, Murdered, Indigenous series began because I cruise antique shops and I kept coming across these black and white photographs. I ended up buying massive lots of them that show historic Americana culture, which featured predominantly white people.

It is important to note that my wife is Navajo and I teach at Diné College in Tsaile, Arizona. In the summer of 2020, the George Floyd incident happened. My wife found me and said, “You’ve got to see this video.” It affected all of us. That was the opening to be really bold in exploring another issue that I had been having conversations with colleagues and friends on the campus of Diné College about, and that was missing and murdered Indigenous women.

I started digging in online databases finding information on these young women who had gone missing on reservations. It was so sad that their identities had been reduced to these statistical images online. For the series, I am associating each individual on a canvas with a place on the Navajo Nation–Ganado, Chinle, Tsaile, Window Rock. I have a design background and diagrammatically, the process for constructing these pieces comes very naturally to me because of my training in architecture.

How many photographs are on each of the pieces in the series?

You could probably guesstimate hundreds go into one piece. This series is all planned out and I have digital diagrams that guide me–they are like architectural blueprints. These Missing, Murdered, Indigenous pieces are 48 inches tall and 36 inches wide.

On a granular level, why do you choose to draw on the photographs in these pieces?

I draw on them with pens in brown, red, and black. Metaphorically, that could indicate people of color. It was cathartic to me to take these photographs, mostly of white folks, apart after experiencing the George Floyd video. The video translated into missing Indigenous women because they’re related–they’re race-related crimes. These women are not disappearing for no reason. Me cutting photographs and taking them apart spoke to the idea of dismantling structural racism.

It was interesting seeing all of these photographs because they were lost without home. Drawing on the photographs was a meditative process because it’s just lines, but it’s a release. It’s technical, it’s a traditional drawing technique, but it is something else: if I interact with these materials, it sort of gives me permission to use them.

I’d say this work is different. Previously, what I was exploring in my work came from ideas within me. It’s been really refreshing to take a break from that and allow the outside world to influence me. These incidents of women disappearing or black men being murdered is something outside of myself that I’ve folded into my studio process. My previous work did lead to this current idea, but it is new to introduce these outward, uncomfortable feelings into the studio.

When I was new to Diné College, I was introduced to their institutional philosophy: Thinking (Nitsáhákees), Planning (Nahat’á), Implementation (Iiná), and Reflection (Siihasin). It is perfect for the art and design process. That’s a part of what I’m currently practicing with the Missing, Murdered, Indigenous series, too.

Was there a specific story that cut to your core where you knew you had to create art to speak to the issue of missing and murdered Indigenous women?

Working on Navajo Nation and having conversations with my students and faculty colleagues, missing Indigenous women has come up multiple times. In the classroom, students are concerned about what is happening around them. There’s mystery in the way these moments happen–it wasn’t a particular point in time. It added up cumulatively.

Can you speak to the value of teaching young artists who all share a common cultural background? It seems, to me, this could be incredibly impactful because there could be exterior pressures if you’re a young Indigenous artist studying at an institution that may not have that reflective representation.

Geographically, the historic plan for many art students at Diné College was for them to get their Associates on Navajo Nation and to take that to another regional institution in Flagstaff, Albuquerque, or Phoenix for a BFA. Diné College’s BFA program is only two years old and the goal, for us, is to give the avenue for Navajo students to be able to study art on their homeland connected to their culture and experiences. All of those variables directly influence what they’re thinking about and, hence, what they’re making. That compels the rigor and the discipline that these students have. They want to get their Bachelors degree on their land.

What do you ultimately seek to express through your work?

The Missing, Murdered, Indigenous series is a small part of what I’m always thinking about. There is another series I completed recently called Exploded Axon I, II, and III. They’re landscapes I experience on my drives, places like the Chuska Mountains and Wheatfields Lake. I listened to that landscape and pushed it through for those three works. It’s an architectural thing, too. You arrive at a site and try to understand the site to create a better architectural plan. But that applies to visual art as well. You think, how can I represent this and bring something new? Landscape is that overarching obsession for me. I’m in dialogue with my own work constantly. I choose to be there, so it must be working out. 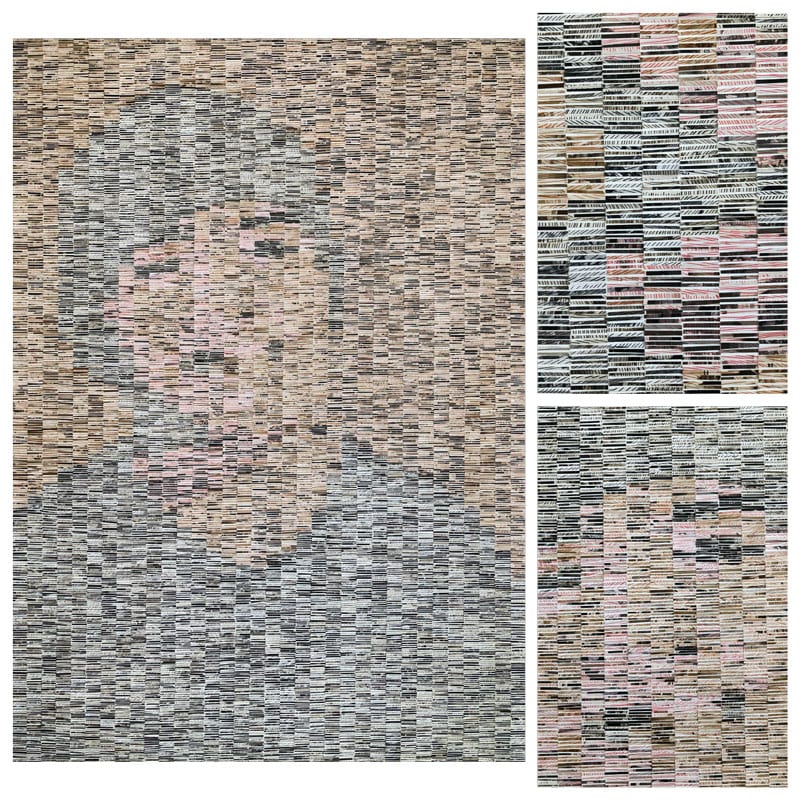