Beloved singer-songwriter Neil Diamond is 80 this week, and he’s retired from touring due to Parkinson’s disease. But does that stop him from releasing surging gloppy heartfelt AOR gold to bring us all together? You bet your bum-bum-bum it does not. Around Christmas time he unleashed an expansive feel-good split screen video of fans (mostly in lockdown) singing along to his evergreen mega-hit “Sweet Caroline.” Unlike Gal Gadot’s infamous celebrity “Imagine” video (no, I will not link to it), these are all a) regular folks who can b.) mostly carry a tune, and they belt out the familiar creepy/sappy lines—“Hands touching hands/Reaching out/Touching me/Touching you!”—with a solid impersonation of Neil’s inimitable extroversion. In a time of isolation and misery, how can you not wipe away a tear at the guy in a Santa suit, or the woman thumping out a drum fill, or the elderly couple dancing, or the toddler shaking and going “oooh oooh ooh,” or at the stadium of people singing along.

Neil, I’m a believer. You got to me, and I’ve got the feelin’. We are separate, but all united in Neil. Or as the shirt worn by a woman in a Neil Diamond concert video declared, “You can touch me anytime Neil!” (Ew.)

But! Touching (ahem) as the global singalong is, it’s hard not to notice that the people being touched are not exclusively, but overwhelmingly, white.

This isn’t exactly surprising. Neil Diamond is a massive hitmaker, and there is no doubt that he has thousands upon thousands of Black and brown fans. George Clooney’s recent Netflix film The Midnight Sky had a notable scene in which a multi-racial space crew sing along to “Sweet Caroline.” But nonetheless, Neil’s brand of corny, sentimental, easy listening music-theater-ready Americana schmaltz is associated with an inclusive, non-militant, but still predominantly white audience.

America should be as open as a Neil Diamond chorus; it shouldn’t be a fascist nightmare of walls and cages and despair.

Diamond himself is white, after all. But he’s also Jewish. And his ability to take that Jewish schmaltz and turn it into a universal call to emote is a tribute to the best in America—and also a tribute to some things that are less than the best.

Diamond was born in 1941, the son of Eastern European immigrant dry goods merchants. He grew up in Brooklyn at a time when antisemitism was waning, and white Jewish people faced many fewer barriers than their parents. He was inspired to be a songwriter when he saw Pete Seeger perform at a Jewish summer camp—sleepaway summer camp with folk singing being a part of the Jewish experience so pervasive and accepted that I didn’t even know the gentiles didn’t do that until I was around 30.

After banging around the New York music industry, Diamond finally landed at the famous Brill Building. There he wrote songs that consistently combined a sense of alienation and exclusion with the experience of joy and acceptance. The minor key menace of “Solitary Man” is a list of hopeful love affairs ending in disillusion, all leading up to a big honking chorus, which sums up isolation in an inclusive feel-good hook. And there’s one of his most famous hits, “I’m a Believer,” in which that skeptical Jewish guy doubts the power of love, until he sees her face, and the carnivalesque music swirls around the title phrase with the force of rapture and a go-go beat. The Monkees version was bigger, but their version, despite its appeal, doesn’t hold a candle to Diamond’s alternation between world-weary knowingness and that conversion with just a hint of a wink.

You can find hints of the Jewish experience and integration throughout Diamond’s work. But you don’t need to look for hints in his soundtrack, The Jazz Singer. Released in 1980 as an accompaniment to his so-so film about a cantor’s son who chooses pop, the album itself was a mega-success, especially the revved up immigrant anthem “America.” Over a bloated Vegas arrangement which starts at bombast and ratchets up to truly gasconade, Diamond imagines the experience of his people, which is also, through his corny, chesty genius, transmuted into the experience of lots of other people too.

When I was talking about some of these issues on Twitter, a bunch of people chimed in to say that they’d hadn’t known that Neil Diamond was Jewish. Someone said they’d always thought “America” was about the Irish immigrant experience. Listening to it now, in 2021, it’s impossible not to hear it as a repudiation of our current, despicable border policies. America should be as open as a Neil Diamond chorus; it shouldn’t be a fascist nightmare of walls and cages and despair.

But wonderful as “America” is, it’s still not exactly an anthem for all Americans. Indigenous people didn’t come by ship to a “new and a shiny place”; on the contrary, the people on those ships took the shine right off their homes. And you can’t really say that people brought here in the Middle Passage were coming to America for “freedom’s light burning warm,” nor even that they had a “dream to take them there.” The experience of white Jewish Eastern immigrants can stand in for the experiences of many people, and can be inspiring to many people. But its specificity excludes others.

Of course, Diamond doesn’t need to speak for everyone. It’s understandable that his song speaks to the history of his family, his parents and grandparents, rather than to someone else’s. But the reason he’s a mega-star, beloved by all those people singing “Sweet Caroline,” is precisely because he’s been able to express his particular feelings of being an outsider and a Jew in such a way that they feel universal and accessible to the great squishy soul of America. Even when he’s most explicitly talking about his Jewish background most explicitly, lots of people who are not Jewish still see him as belonging—and more see him as defining their experience of belonging.

For a white Jewish person like me, married to a woman from Kentucky, no less, Neil Diamond is an assurance that, despite some bumps along the way, America believes in me. Indeed, it’s an assurance that America, in its fumbling, blinkered way, can’t even tell the difference between believing in me and believing in itself. Our schmaltz is your schmaltz, bubala.

For Black people or people of color, though—including Black Jewish people and Jewish people of color—Diamond’s endurance might not be quite so reassuring. There are certainly many Black performers with massive appeal. But when Beyoncé, for instance, references a Black history of persecution, pride and resistance in “Formation,” no one is going to mistake her for singing about the Irish. The ability to have your individual identity validated by America as uncontroversial and universal—that’s reserved for white people. Which is why that sing-a-long, in all its comforting schmaltzy universalism, is still an uncomfortable reminder of how America divides us, even if Neil Diamond says he’s touching me and you both. 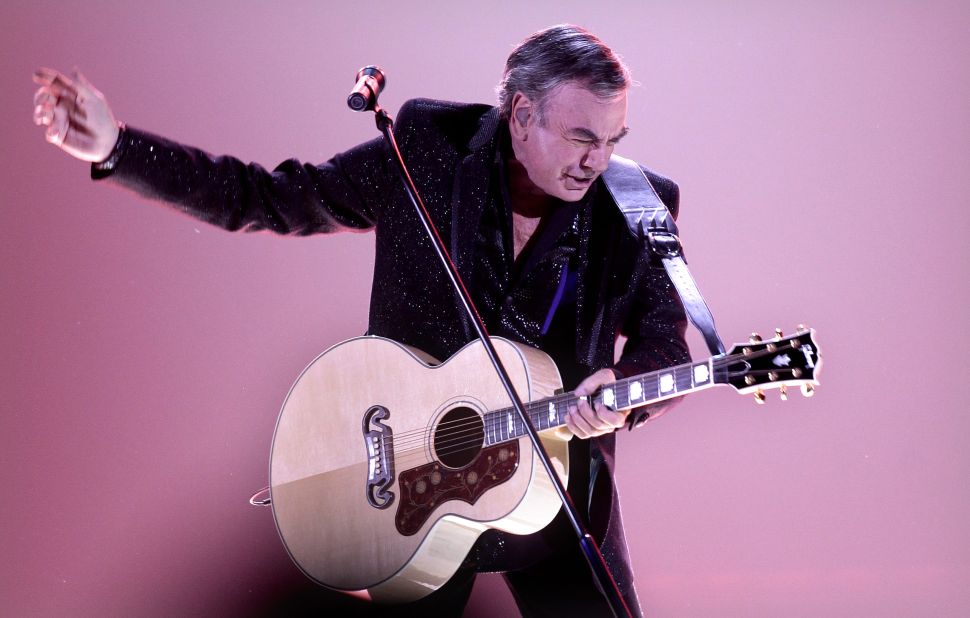