We’ll look back on 2020 as the most significant transitional year in media entertainment history, but the truth is that the pandemic merely expedited the trajectory the industry was already barreling toward. Video streaming usage spiked in 2020 to unprecedented levels. The biggest small screen cultural phenomenon (The Mandalorian) of the year was a streaming exclusive and streaming platforms provided an easily accessible safe haven for new films as the pandemic shuttered movie theaters worldwide. Even as COVID vaccines make their way around the globe, the shift in how we consume entertainment is likely permanent in very key ways.

Despite the proliferation of streaming services, we’re still in the embryonic stages of the overall media-described streaming wars. What is true for 2020 may not hold strong in 2021. But from what we can glean from last year, Netflix and Disney+ are the market leading SVOD platforms to beat.

On Tuesday, Nielsen released its year end 2020 streaming rankings in terms of total minutes watched across U.S. subscribers in 2020 not accounting for mobile usage. Admittedly, this metric skews in favor of multi-season shows, which is worth considering as we dive into the numbers for original streaming series, licensed streaming series, and movies available to stream. Without also knowing what percentage of a streaming platform’s subscriber base also viewed a piece of content, we can’t know the full context. But Nielsen’s data nonetheless helps to paint a more complete picture of audience behavior and streaming success. 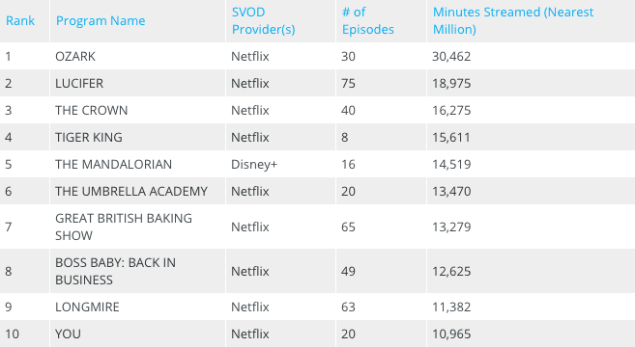 Per Nielsen, Ozark was the most-watched streaming original in 2020 with 30.5 billion minutes watched across 28 total episodes. As I’m sure you can notice, nine out of the top 10 most-watched SVOD original programs can be found on Netflix, with Disney+’s The Mandalorian the lone exception.

Netflix has been producing original content for nearly a decade and they deserve immense credit for providing a steady stream of fresh originals throughout the pandemic as lockdowns wrought havoc on production schedules. With 195 million global subscribers and the largest library of original content (roughly 50-plus originals per month last year), Netflix remains the market-leader in the industry to no one’s surprise. However, despite its domination in the top-10, Netflix is not infallible (more on that in a bit).

As has always been the case, original content generates the most significant cultural conversations while driving new subscriber growth. Yet library content (i.e. pre-existing licensed shows) garners the most raw viewership. 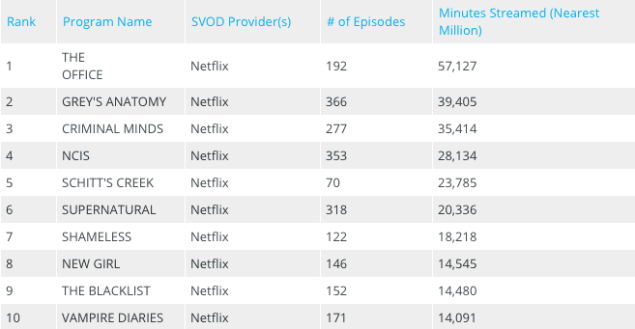 The Office was the most-watched SVOD program overall in 2020 among U.S. subscribers with 57 billion minutes watched over 192 episodes. Again, you’ll notice that Netflix stands virtually unparalleled with 10 of the 10 most-watched acquired series available to stream in America. But here’s where things start to get interesting.

While original content is crucial to attracting new customers, licensed programming is integral to keeping these new sign-ups on the hook for an extended period of billing. Looking at both, it becomes clear that the fragmented nature of entertainment today may pose problems for Netflix in the future.

Content ownership is the hidden battle of the streaming wars and, on that front, Netflix is surprisingly lacking. Among its slate of 2020 original hits in Nielsen’s Top 10, Netflix outright owns just two (Ozark and Tiger King), according to former entertainment media executive Entertainment Strategy Guy. Its most-watched show overall, The Office, is now streaming exclusively on Peacock and the licensed library will continue to shrink as companies aggressively reclaim their own content for in-house usage.

Even so-called Netflix originals such as The Crown and The Umbrella Academy prove costly endeavors as Netflix does not outright own either hit show.

“For a finance audience, Netflix not owning its own IP is a large variable cost for a company that has yet to consistently generate free cash flow,” Andrew Rosen, former Viacom digital media exec and founder of streaming newsletter PARQOR, told Observer. “It also means that Netflix is not making enough bets on its objective of building out a library of original IP. Netflix is both explicitly and implicitly messaging to Wall Street that a Disney ecosystem/flywheel model is its ultimate goal, but if its top performing IP continues to be licensed, that would imply it is still no closer to reaching that objective.”

For a marketing audience, Rosen argues, it matters much less as Netflix’s goal is to merely unearth and promote the “right” IP to engage the greatest number os users across new and existing subscribers. Assuming Netflix makes smart bets on licensed IP, as it did with The Office and Friends, then it shouldn’t necessarily be a defining weakness as long as it contributes to retention.

“But, if licensed IP continues to be the most optimal marketing tactic to drive growth and reduce churn, it will raise more questions as to whether Netflix is a service that can successfully build out its own library of original IP, and can reach its objective of a Disney-like ecosystem,” Rosen said. “In other words, the key question for Netflix is whether the predominance of licensed IP is a feature or a bug on its way to achieving its objective of a Disney-like ecosystem.”

These same questions seep into the streaming film division as well. 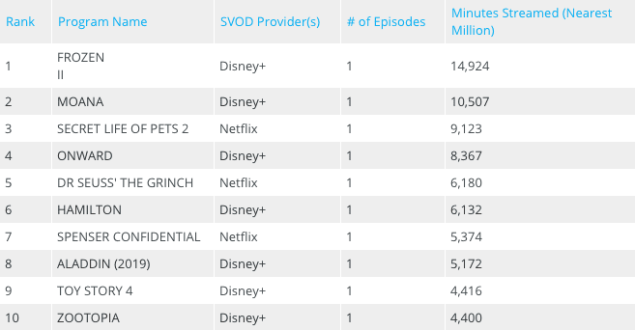 However, children often rewatch their favorite pieces of content over and over unlike adults, so for a metric system designed around total consumption time, it’s no surprise that Disney+’s kid-friendly library is dominating. What is worth noting is that Netflix used to be the streaming home of Disney’s films until the Mouse House dissolved that licensing partnership in preparation for Disney+. Though Netflix is no longer paying huge sums for Disney movies, it is likely paying more in the long run to find and create new content to replace what was lost. That’s an impact that doesn’t necessarily show up clearly on the stat sheet, yet directs strategy. After all, Netflix only owns one of its three movies in the top-10, per Entertainment Strategy Guy.

8/ And the film tables: pic.twitter.com/9SqAF1Z0iW

HBO Max and Disney+ saw significant growth in streaming activity shares this past quarter, with the former looking poised to overtake Hulu — especially considering the full Warner Bros. slate this year will premiere on HBO Max and in theaters simultaneously. Wonder Woman 1984 enjoyed the strongest opening weekend performance on any SVOD platform for the entire Q4.

According to data provided to Observer by Reelgood, which analyzes performance based on each title’s streaming and engagement share among the 100 most-watched movies debuting between Oct. 1-Dec. 25, Wonder Woman 1984 (HBO Max) and Soul (Disney+) enjoyed the best opening weekends. This has helped HBO Max and Disney+ accrue the largest quarter-over-quarter usage growth to end 2020. 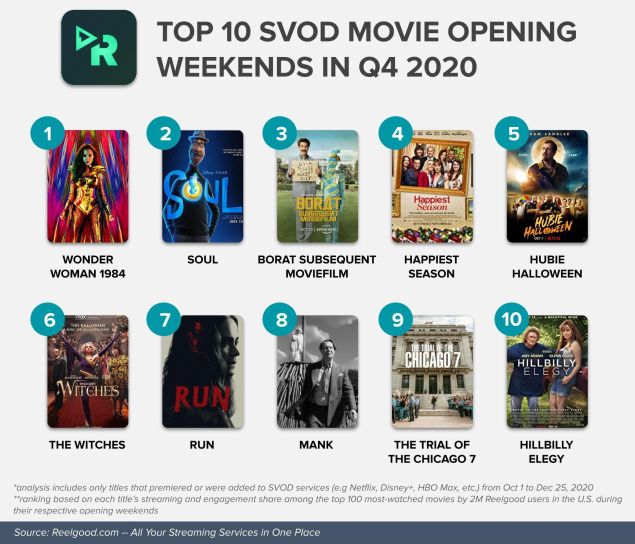 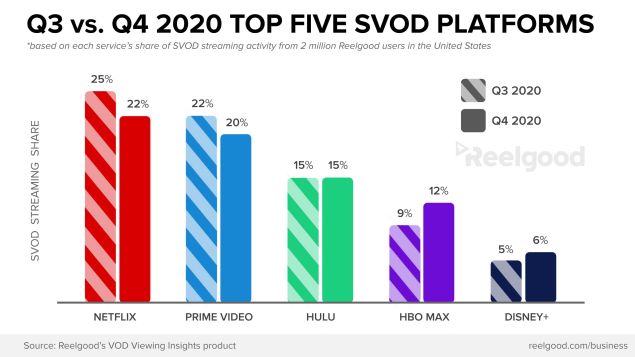 2020 proved to be a crucial battleground for the evolving streaming wars. A greater emphasis was placed on original content as major studios reclaim their previously licensed hits. At the same time, the theatrical shutdown has elevated the importance of original movie content on the small screen. Across Nielsen, Reelgood and other third-party metric data, we can begin to identify the major strengths and weaknesses of each high-profile streaming platform to better project where the near future might lead us. That proves increasingly helpful for potential market-leaders such as Netflix and Disney+.