Annelyse Gelman is not the first poet to be more interested in process than product, but she may be the first to invent her own word processor to explore this fascination. With software engineer Jason Gillis-Grier, Gelman created Midst so that writers can show their writing process (through a timelapse) as opposed to simply talking about it. But Midst is far more than a party trick to generate conversation and insight between writers—the goal is to demystify, describe and, in the end, democratize the writing process.

Though the official launch of the software is February 8th, Gelman released the journal Midst’s first issue—18 timelapse videos of different poets drafting an original poem with the Midst software—in the winter of 2019. Around this same time, Gelman was writing poems regularly using the Midst software when she had one particularly engaging and productive writing session captured in a file called “pool.midst”. In 2020, that .midst file became a physical book called POOL (Midst/Neck Press). POOL is 35 pages, each a different shade of blue, printed on a Risograph and hand-bound by Gelman and her publishing collaborator, Ryan Paradiso of NECK Press. POOL was the most beguiling, hypnotic, and exciting reading experiences of 2020, and maybe of my life. That’s why I talked with Gelman about the book, how it was made, and what Midst could mean for writing.

Observer: As I turned the pages of POOL, I didn’t quite “know” that I was watching a poem being written iteration by iteration. Having not read a synopsis, I didn’t know what I was reading, except that it was some kind of exploded poem.
Annelyse Gelman: That’s really fascinating because it makes me realize that all those poem-instances before the final thing are on some level just bad poems. Which is what makes me keep writing—to find the “real” poem in the junk. It’s funny to think of POOL presenting a reader with all these bad poems, the bad poems it took to get to the good poem. Like, the book is 99% garbage.

I actually have a page of the book that is my favorite, and it’s not the last page…
Amazing! Which page?

Page “9/16 11:45 AM”.  It’s where my favorite “moment” occurs. Where “It is not allowed to run / in the swimming pool” becomes “It is not allowed to die / in the swimming pool”
That shift—exactly what you’re describing—is part of why I made Midst. You can truly see how poetry is a time-based art. Those shifts are (until now) always buried in the editing process, because they get deleted and the reader can never appreciate them. Writing is—even if it’s done privately—still always a performance. And I think writers/readers tend to forget that, especially because the “writing is a lonely practice” idea is so deeply ingrained. Which I guess brings to mind an interesting but maybe silly question which is: when I’m alone at my desk “performing” the writing of a poem, who am I performing for? It’s not quite myself and it’s not quite “the reader” or a potential future reader. It’s like a collaborative improvisational performance between me and language itself.

I designed the Midst software like a regular “desktop word processor”—Microsoft Word or Textedit—because I wanted poets to have as “normal” of a writing experience as possible. That is, I was trying to make a tool that would capture the way that each poet already makes a poem when they’re writing on a computer—sort of minimize the observer effect as much as possible.

Can you tell me more about how the Midst Software works?
For the most part, the “default” setting for Midst is a “typical word processor.” But—I added two features. First, the software itself has a timeline that the writer can open. So, as you’re writing, you can pause and ‘rewind’ your work to take a look at where you’ve been and let that inform how you continue.

Then there’s a second feature: if you rewind the document, you can actually re-enter it at any point on its timeline, and then you can keep writing from that point. So if I, let’s say, deleted that “it is not allowed to die” line but then I rewound it and was like “Wait… that line is awesome…” I can grab it and bring it into the “present” of the poem, or I can just keep writing. Or I could even rewind pool.midst (Midst’s software makes .midst files) to a super early stage, (like when I was writing about looking at fashion models) and try writing a brand-new poem from that moment in time.

POOL is sort of divided in two parts. Before the actual “Pool” begins there’s another poem being worked on, one you call (at one point), “Pedestrian.” What is going on there?
Right, POOL does not begin with the poem that is to become “Pool”. It actually begins with what most blank documents begin with when a poem is beginning: one single line, an observation, a somewhat random place to start. For me it was: “I scroll through the pages of beautiful women.” The next 10 pages/versions are false starts toward a poem that, while ultimately unfinished, is titled “Pedestrian”. Then, the next, bluer page begins what will become “Pool” —it’s a bit disorienting, but then again so is the writing process.

When I look at that page now with “Pedestrian” on it, I can see clearly that I was trying for a title as I was writing, which got deleted pretty quickly. I don’t feel like “Pedestrian” makes sense as a poem on its own. Or, if it is a poem, it’s a bad one. But at the same time, I think I had to write that bad poem to get to “Pool.” And not just in a ‘you-have-to-write-bad-poems-to-keep-in-shape-and-be-ready-when-the-good-poem-comes’ kind of way that writers talk about. I had to write that specific bad poem.

When I look at POOL I actually see three different false starts. First, I try writing about looking at women in an online fashion catalogue. That doesn’t work. Then I try writing about a violent incident—someone getting hit by a car. That doesn’t work. Then I try writing about an aquarium. That doesn’t work. Then I finally get to the image of a drowned man in a swimming pool, the image that ends up being the core of the final poem. But in that final poem (“Pool”) you can see elements of the fashion catalog (where I talk about George’s uniform, his clothing, the patch on his shirt, his boots), the car accident (the violence of his death), and the aquarium (the pool itself). So you can literally see how I had to write those specific things to get to “Pool”. 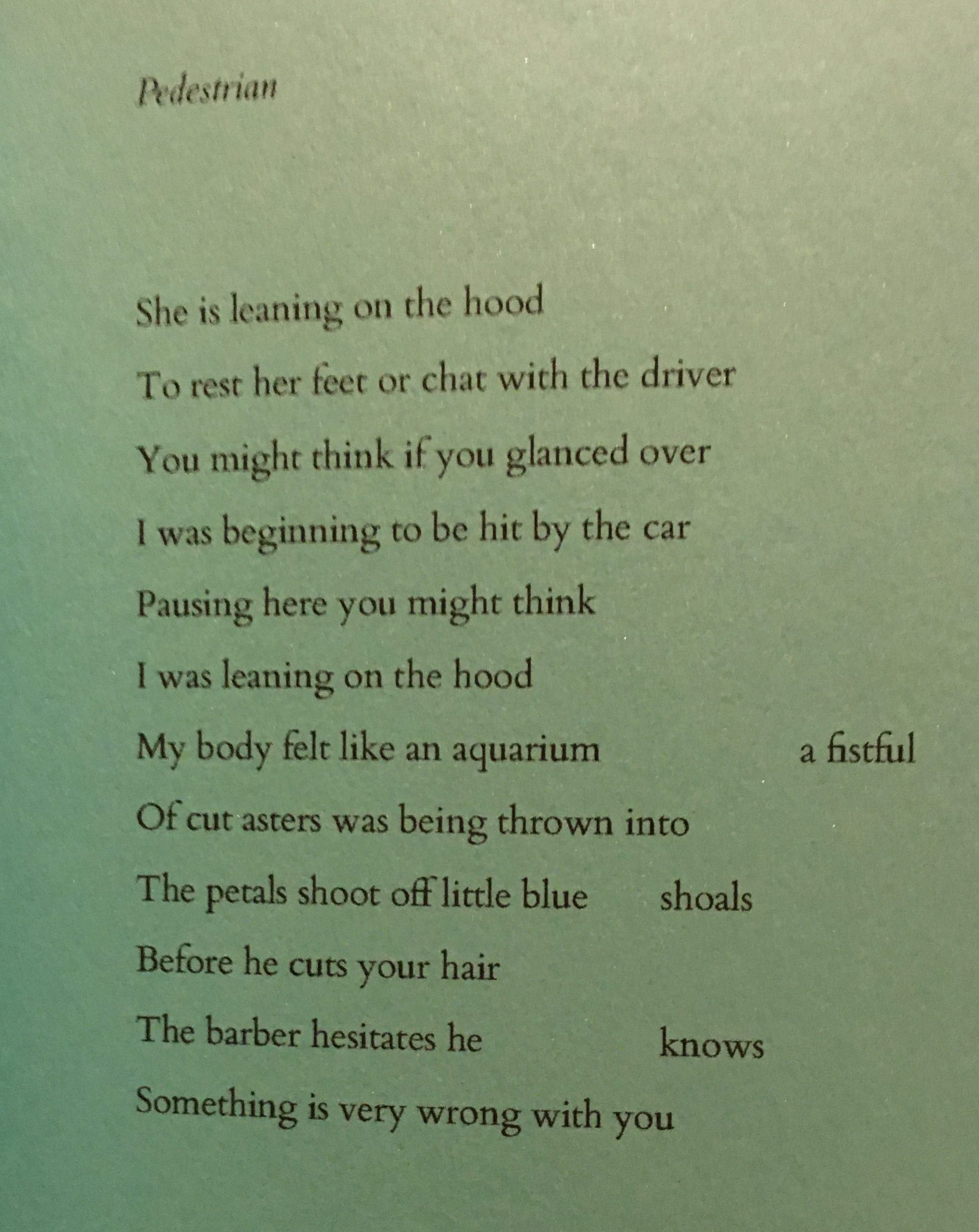 And “Pool” begins with something being very wrong.
I think every poet has a sense that this is true, that the process is integral to the poem, but now you can literally see how that’s the case.

How did you create this software?
I’ve been really curious about process forever, but basically I finally arrived at the idea for Midst and went to a residency in Somerville where artist Marilyn Arsem encouraged me to try to actually make it happen. I flew back to Austin—this was in grad school, in early 2008—and told my friend Jason, a software developer, about how I wished I could record the writing process and play it back. He liked the idea and made a rough demo of the software in an hour. It was mostly him coding, me specifying requirements and testing it out. The pilot Midst journal came out in late 2019. So it actually took almost two years to get the software working how I wanted it to.

How do you know the poem is finished?
I truly love that Paul Valéry quote: “A poem is never finished, only abandoned.”

I think that for “Pool” I just had a feeling while writing that final image of the baseball cap floating like a lily pad, that this was the poem’s ending. And I know I had it in mind that you’re not supposed to end a sentence on a preposition, the awkwardness of that. I really liked the effect of ending on: “A frog has just jumped off of” because it kind of makes the poem hang in a strange way for me, like the silence after a song where the audience isn’t sure it’s over yet, if they should applaud.

What’s your dream for Midst?
My sincere hope for Midst is that it becomes a library of approaches to process. Many poets have already surprised me with their process, either because it’s complicated in a way I didn’t expect or because it was more straightforward than I thought it would be.

The “literary magazine” part of Midst is just the first step, a way to show people what this thing is. I don’t like literary gatekeeping and there are already a billion amazing literary journals out there, so the idea of Midst as a venue to kind of put forth my own editorial vision via commissions is pretty uninteresting to me.

My dream is that we’ll have sustainable ongoing funding so that we can expand and maintain the software, it should have auto-save, spell-check, a PC version so it’s not Mac-only, etc. I’ve always wanted to make it publicly available. Then, the midst.press publishing platform can eventually become public too. Anyone could create an account/profile (midst.press/johndoe) and directly upload their own work. It would be like Vimeo for poetry. It could have social media elements too, such as people sharing and commenting on each other’s process. Then the “literary journal” aspect of the site will be more like an editorial spotlight—me coming in and saying “Hey, here’s a featured poem, because the poem and its process are really cool for x reason.”

Lastly, I really want to develop curriculum around Midst and make it possible to use in classrooms so that students can actually discuss process rather than solely sticking to this workshop artifice where we pretend the poem is a “Finished Work…that we’re also going to pretend is broken somehow.” With Midst there is no artifice—you know it’s a work in progress, a work in process, a work as process. And people can actually learn from each other’s processes (“Oh wow, you wrote the last line first! I want to try that!”). Plus, how cool would it be for high schoolers teachers to give students some contemporary poem to read, and then they can all go online to see how it was written?

It seems like it can democratize poetry writing by making it less intimidating and more honest, maybe.
Look at how shitty my “first drafts” are! Totally. I think people get this idea about poetry that it’s really intimidating, that it’s about taking simple ideas (“I love you”) and dressing them up in fancy obfuscating language (“May I compare thee to a rose blah blah”). For me, that’s just not at all how poems get written. When I’m writing, I am being as direct as I can, always. And, I’m making tons of mistakes and writing tons of…really bad shit. That’s how I write a poem. 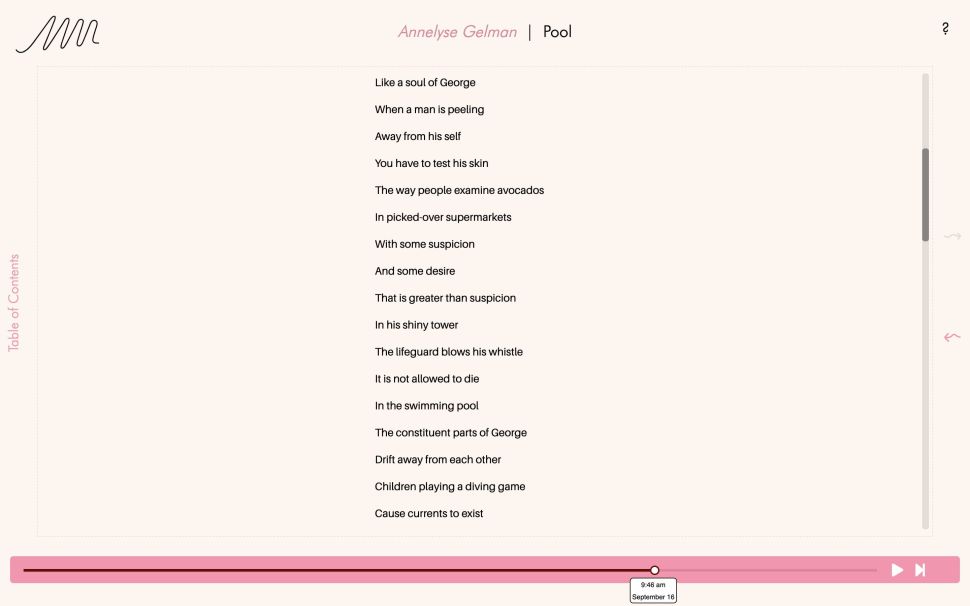