Saturday’s sensational Met Stars Live in Concert with Sondra Radvanovsky and Piotr Beczala proved ideal for those wanting their opera to throb with passion and tragedy. The generous program included excerpts from nine works all ending in death–of the soprano, the tenor or both! Radvanovsky and Beczala brought full-throated opulence and vivid dramatic commitment to a 100-minute recital beautifully accompanied by pianist Vincenzo Scalera beamed live from Germany’s striking candlelit Historische Stadthalle Wuppertal.

Both now in their early 50s, the US-born soprano and the Polish tenor arrived at the Metropolitan Opera in the same opera—Verdi’s Rigoletto–though at very different stages in their careers. Radvanovsky made her debut nearly 25 years ago in the tiny role of the Countess Ceprano after having won the National Council Auditions the year before. On the other hand, in 2006 Beczala first appeared as the profligate Duke of Mantua and was hailed as a “rising star” though he was days away from celebrating his 40th birthday.

While the mature and stylish Beczala swiftly went on to new productions and HD transmissions, the young Radvanovsky took longer to find her way: small supporting parts like the off-stage Priestess in Aïda, Kate Pinkerton in Madama Butterfly and Elektra’s Fifth Maid gradually turned into leads like Antonia in Les Contes d’Hoffmann and Freia and Gutrune in Wagner’s Ring. However, a single Il Trovatore Leonora in 1999 gave a compelling first indication that she was destined to become one of her generation’s premiere Verdi sopranos.

In her early years though, Radvanovsky’s progress was often compromised by a bold soprano marred occasionally by a wild harshness and faulty intonation. But she tirelessly worked on those issues and eventually gained remarkable control over her effortlessly house-filling instrument. The soprano’s unexpected embrace of Bellini and Donizetti heroines may have contributed to her now stunning command of dynamics which was much on display in Wuppertal, particularly in her opening aria, a refulgently sung “Pace, pace, mio Dio” from Verdi’s La Forza del Destino.

Beczala replied with an intense “Quando le sere al placido,” another beloved Verdi favorite. As when he performed it during a run of Luisa Miller at the Met three years ago, the aria revealed some strain suggesting that his recent excursions into more dramatic repertoire may not always have been wise. But he was on firmer form as he reunited with Radvanovsky for a blazing performance of the impassioned love duet from Un Ballo in Maschera, the sole work in which the pair have appeared together at the Met.

Though he’s recorded excerpts from it on his newest CD Vincerò. Beczala may not yet have taken on the title role of Andrea Chenier, but based on the live concert’s richly satisfying selections he should consider it. Radvanovsky though stole the Giordano segment with her poignant “La mamma morta,” an aria she had to encore during a Chenier in Barcelona several years ago.

The archetypal operatic intertwining of love and death imbued their Chenier final duet during which the doomed lovers exultantly stride hand in hand to the guillotine embracing with equal fervor “Amor!” and “La morte!” In the empty Stadthalle, silence greeted its heady conclusion but if Radvanovsky and Beczala ever march to the scaffold at the Met as magnificently as they did on Saturday the entire house will certainly rise to scream “Bravi!”

Potent arias from Manon Lescaut, Cavalleria Rusticana, Adriana Lecouvreur, and Moniuszko’s Halka (a mournful piece from the treasured Polish opera championed by Beczala) followed, but the afternoon’s smashing conclusion was an artfully condensed Rusalka by Dvorak. Over the past several decades, the Czech composer’s spellbinding fairy tale about a nymph and her doomed love for a faithless prince has moved from an occasional rarity to a widely performed repertory staple.

In Radvanovsky’s haunting “Song to the Moon,” the heroine longs desperately for romance; then Beczala answers with the initially besotted Prince’s proclamation of love for the mysterious Rusalka. But those superb pieces were just preambles to the lengthy and gloriously moving finale during which the Prince yearns for a kiss from Rusalka even though he knows it will mean his death. Despite coming at the end of a demanding program, a soaring Radvanovsky and Beczala thrillingly embodied their characters’ anguished sorrows.

After so much hot-blooded Italian fervor, Dvorak’s cooler intensity brought out the very best from two artists clearly inspired by the opportunity to bring their very best to worldwide audiences. After the lukewarm pairing in October of Diana Damrau and Joseph Calleja, the Met hit the jackpot, finally bringing Radvanovsky and Beczala back together.

Saturday’s concert was originally to have taken place in Barcelona in late September but the unending pandemic forced its rescheduling as it has with several other Met Artists Live in Concert events. The series, which commenced in mid-July, was to have concluded by mid-December but now will continue with concerts by Anna Netrebko and Sonya Yoncheva next month with a final one featuring Angel Blue on a date still to be announced.

Pandemic cancellations have deprived Met audiences of many Beczala appearances: Werther, Rusalka and his first-ever Radames in Aïda, but he’s due to return to the Duke for a new Rigoletto on New Year’s Eve. Radvanovsky’s schedule however inexplicably has included no New York City Met engagements since February 2019, so this stellar concert represents her sole Met appearance until the 2022-23 season at the earliest. However, her many fans can catch her online again beginning February 5th in a pay-per-view stream of Bellini’s Il Pirata taped earlier this month at the Teatro San Carlo in Naples. 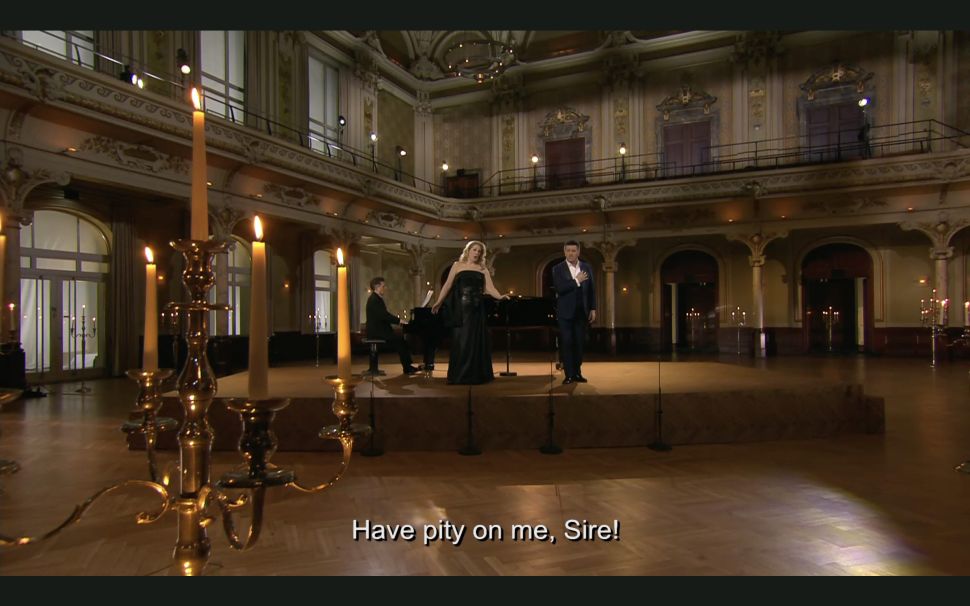