What’s the meaning of the GameStop saga, the ongoing stock-market rollercoaster ride? A Reddit-fueled surge in the video-game retailer’s stock that began as a joke ultimately wrecked one Wall Street hedge fund, made (at least according to the screenshots) some day-trading retail investors suddenly very wealthy, and shattered the already fragile myths about the “rational” market on which our economy and society are based.

The odyssey is still ongoing and changing by the minute, but exuberant analysts went big. “We are witnessing the French Revolution of finance, where the proletariat is rising up to change the order structure in finance,” a breathless Anthony Scaramucci, the venture capitalist and, very briefly, former White House spokesman, said in an interview with Bloomberg News on Wednesday night.

A catchy analogy, that’s caught on. The thing is, Scaramucci is right, but not in the way he thinks.

In 1789, the French replaced a king (whom they guillotined) with a dictator (whom they guillotined), who was later replaced with an emperor (who lasted long enough to create a legal code, much of which still stands today). The boss is dead, long live the boss. And, lo: so far, the biggest winners are all still on Wall Street, whose ultimate power over the very framework on which r/wallstreetbets is run (that is: Wall Street!) was never in doubt. Beneath the hype cycle, beneath the headlines, it was obvious who was still in charge.

On Thursday, retail investors found themselves iced out. Robinhood, the Zoomer-friendly, free trading app that many posters on r/wallstreetbets used to stake out their positions, restricted trading in at least 13 stocks on Thursday morning, including $GME and other companies Redditors targeted for short squeezes. Other retail brokerages, including TD Ameritrade, are now allowing users to only sell their shares, not purchase more.

Trading resumed Friday, and as of mid-morning, shares in GameStock were still an astronomical $340, up almost 20 times from early January. The Securities and Exchange Commission—created in 1934 during the Great Depression, with the intent to avoid another such calamity—said it would probe Robinhood and other brokerages. In Robinhood’s case, the SEC will be probing further: Regulators fined the company $65 million in mid-December for hiding its financial arrangements with trading firms. Not so democratic, after all.

Regulators may yet take further action. “We will act to protect retail investors when the facts demonstrate abusive or manipulative trading activity that is prohibited by the federal securities laws,” the SEC said in its statement. In the meantime, Thursday’s twist led to a very discordant moment of comity between Ted Cruz and Alexandra Ocasio Cortez, and compelled Sen. Elizabeth Warren to complain that a lack of regulation let all this happen. But in the now, the sum total is an object lesson, to the same posters who memed and trolled their way into watching Melvin Capital gush blood on the street, to realize that the game is still rigged against them.

If there was any “revolution,” it was that r/wallstreetbets merely democratized market manipulation—a very old Wall Street trick. Or, worse, the internet just provided a platform for the illusion of control, while Wall Street had its thumb on the scale and reaped all the real profits all along.

Big money, like the institutional hedge funds that triggered the imbroglio by shorting GameStop’s stock in the first place, were still allowed to trade freely during the Thursday suspension. And while Melvin Capital’s public bloodletting has led to many gleeful tweets, other big pots of money are making a bigger killing, out in the open but away from the spotlight.

Even if BlackRock didn’t exist, Wall Street would still come out on top during GameStock, since they run the trades. As business writer Alexis Goldstein wrote in her newsletter Markets Weekly, retail brokerages like Robinhood exist and are profitable because traders make a small profit on each trade.

In Robinhood’s case, Wall Street takes a double cut. Robinhood receives a fee for each transaction from… a hedge fund. That hedge fund, acting as what’s called a “market maker,” essentially a clearinghouse for retail trades, makes money by buying shares in lots, at lower prices than their clients are paying. A small profit on every share, but an avalanche of pennies adds up.

This arrangement, called Payment To Order Flow, sounds predatory, but is entirely accepted on Wall Street—and it also explains why Wall Street is okay with “GameStock.”

One hedge fund lost money, another hedge fund made money. “The house always wins,” said one investor and analyst, who declined to give their name in order to speak freely.

What happens next? GameStop, priced below $10 before the 40x madness began, will come down to earth eventually. “The most likely long-term outcome is that the price of GameStop will eventually converge back to its fundamentals-indicated level, but it’s difficult to predict just how long that will take,” said Anastassia Fedyk, a professor of finance at UC Berkeley’s Haas School of Business whose areas of expertise include group behavior.

There are other examples of media coverage triggering brief spikes in stock prices over the past few decades. Stock-trading message boards have for ages been poisoned with random anonymous posts touting this or that stock; sometimes these are investors, trying to post towards a “pump and dump.” Going forward, r/wallstreetbets has shown the ability to make a stock jump. This should compel institutional investors, like the big hedge funds, to re-evaluate a fundamental concept in finance called “arbitrage.”

In textbooks, arbitrage can be boiled down to a buyer purchasing the same security at different values on different markets, but always benefiting from the price difference. That’s an “efficient market,” which in some analyses is a fantasy anyway. Some point to r/wallstreetbets as a demonstration of how the market is not efficient. But the market’s history is full of hype-cycle-fueled spikes and dips. Tech stocks have done this. Cannabis stocks have done this. What’s really different, here?

“Although unusual, all of this boils down to basic economics, not a problem with the market,” said Stephen Lenkey, a professor of finance at Penn State University who has recently published on the phenomenon of short selling. As for who wins? “The short-sellers are having a rough go, but other Wall Street firms who lent the securities for shorting are making out pretty well,” he added. “Wall Street should easily recover from this, but unsophisticated, retail speculators who are still holding call options when the pinprick occurs could wind up losing their entire stake.”

Another breathless, kneejerk interpretation of GameStock’s meaning is that it’s a giant critique, a condemnation of the market. Occupy with an app.

A revolutionary situation is when regimes collapse and old models of living and doing are replaced with new ones. Can anyone realistically say that’s what’s happened here, if hedge funds still exist and still benefit, when an internet mob of investors takes out another hedge fund?

“If Wall Street loses its head, we are okay,” said Kristin Hull, the founder and CEO of Nia Impact Capital, a California-based “conscious investment” firm. And that hasn’t happened yet. Instead, retail investors are convinced that they can and should start trading on an Elon Musk tweet, or a flurry of Reddit shitposts.

Some retail investors will make money this way. One Redditor is reportedly up millions on a $50,000 buy. Many others—like those who bought at an unsustainable peak, or failed to sell before a crash—will lose. All the while, the game they’re playing is still Wall Street’s. La plus ca change. 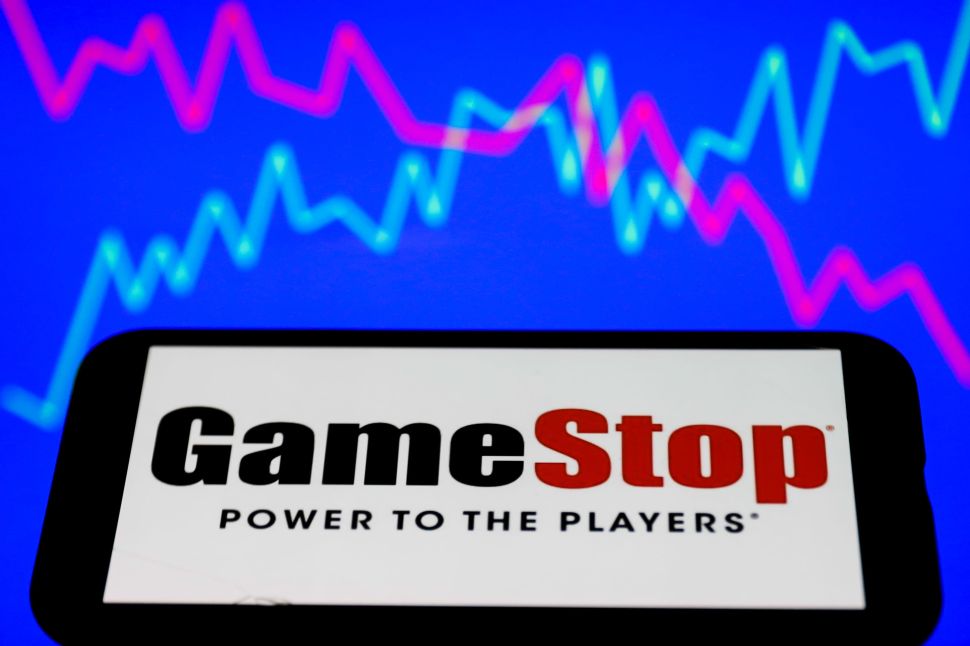