If you can conjure the feeling in your bones of what it’s like to sense that you’ve known someone your whole life when you’ve only just met them, you already know what it’s like to experience the art at the After Our Bodies Meet exhibit in Brooklyn, New York at the Tiger Strikes Asteroid gallery. The show — which is appropriately open until February 14, Valentine’s Day — features the work of 5 artists examining themes of love and memory, and how they’re interconnected. Each of the works of art pose questions, ultimately, about what constitutes “enough” when it comes to human connection, when we will always be craving more.

Anyone who has ever felt truly close to someone knows it’s not necessarily about physical proximity, or even touch, but about feeling that you are seen and known — about being enveloped in the warmth of being connected in a nearly indescribable way. That feeling might only be captured through, say, a piece of marble on satin cloth — hard holding down soft — or by placing a candle on a radiator to let it melt into the warmth of existence, then taking a photo of its juxtaposition — hard turning into soft. What happens to these objects when they meet? They will never be the same. This knowledge is implicit in the art pieces chosen for this exhibit. The group exhibition curated by Daniel Johnson features works by Margrethe Aanestad, Daniel Arturo Almeida, Dalia Amara, Cyriaco Lopes, and Randy West.

In Margrethe Aanestad’s pieces, she explores gentleness in a perhaps unexpected way. Stille Forvandling / Silent Transition V  and Stille Forvandling / Silent Transition VI, two long canvasses covered in pink hues of chalk, portray the meeting of unlikely subjects. You wouldn’t expect chalk on something besides a blackboard in a classroom or perhaps a sidewalk. In making them friends, letting the soft pastel purple and pink chalk fade slowly off the page until it’s barely noticeable, Aanestad shows the intimacy of the “after.” Often, we are either so caught in the moment or so worried about the future that we can’t feel the beautiful intensity of liminal space and transition periods. Aanestad is not afraid of these moments and captures them with grace and precision, the same way she does by placing marble over satin.

Dalia Amara also masterfully captures a seemingly mismatched pair touching — two things that perhaps should not meet, meeting. In Cold Suppression, a black and white photograph shows three white candle sticks on a radiator. Are the candles being melted and destroyed by the radiator, permanently vanishing? Or is the radiator simply turning them into something else — a more natural, relaxed form for the wax. I wonder, as the photograph seems to posit the question of, if the ways we are changed by touching each other are “enough” to fundamentally change one another in shape or form, our atoms realigned, the states we were forced into and the people we thought we were, suppressed and rearranged.

I know, for example, that I am not a hard thing. I am tender and fragile. I have saved every concert ticket I’ve ever had. They’re in a box with my childhood photos and movie ticket stubs in my closet — and they span back 20 years. I don’t keep them because they’re physically important, and I don’t think I would be devastated if I lost them to a fire. I keep them because they remind me of what it feels like to be connected to something greater than myself — the same sentiment that the pieces of art present in After Our Bodies Meet do when you look at them. The artworks in the exhibit question “what is enough?” when it comes to physical affection. Similarly, I often wonder when the beauty and closeness I’ve felt to some ethereal moment of bliss will be sufficient so that I no longer need to save the concert tickets or the photos, the physical — how many experiences must I have before I can convince myself, or truly feel, that all of this has been real, and won’t fade from existence just because it’s over now?


Pieces of art like Celestial Bodies, a Sci-Fi Adventure by Cyriaco Lopes, express the abundance of emotion and hunger for the most immediate tangible intimacy that comes along with desire. In the video piece, the viewer is shown scars on a person’s palm, an up-close look at the marks that a bottle cap has left on their skin — and the blemish is barely noticeable. We’re then taken inside a person’s mouth, wholly enveloped in the wetness of their tongue and close enough to see their uvula. In a later scene, the light streaming in through the person’s ear is shown — all a snapshot of what it’s like to want to be inside of someone else, to hear what they hear, to taste what they taste, to be as close to them as possible and still to never feel like that’s enough. The movie plays and it’s like exploring someone’s body for the first time in the dark, unable to fully see but so sure of where your hands go, pupils so close they’re completely dilated, palms sweaty. The intimate bond that feels like you’ve invented something, that no one has ever felt this way about anyone else — when you want to make someone’s body into your home.

In another piece of work by Lopes, the same marked hand appears in Sunset. “I squeezed a soda cap as hard as possible and said: the sunset. I opened my hand and we watched the mark slowly disappear,” text overlaid on the canvas below the photo says. The idea that the lightly dented skin is quickly healing and returning to stasis, reconfiguring itself is communicated through the added text — a commentary on the temporariness of strong feelings. As much as they make their marks on us, long after our bodies have met — have changed each other for better or worse — the corporeal, more visible effect will have all but faded, if not from our emotions, from our sight.

Observing works like Lopes’s, it’s easy to feel like you’re being pulled into the artist’s world of desire and cross-examination of intimacy. Standing at the edge of the screen, I couldn’t get quite close enough to truly feel the experience for myself — after all, it’s been ten months of staying indoors and away from others during the pandemic. For many, that’s meant little to no physical contact, and less intimacy overall, physical or not. But watching Lopes’s experimental short film, I recognize the context enough to remember what that yearning is like, embodied and touchable.

Even as young as eight years old, I felt love so intensely — a whole body sensation. A craving to fit someone else inside of me — not in a sexual or even physical way at all, just the hot-blooded ache of wanting to be so close you can hear someone’s thoughts, feel their feelings, too. I remember, then, being in a sexual education class one day in fifth grade and thinking I could never even be close enough because there’s only so much of someone you can put inside yourself. You can’t swallow them with your love. I still feel this way much of the time when I love someone. It is never “enough.” As a whole, the pieces of art present in After Our Bodies Meet manifests that potent sense of urgency to almost merge with someone you feel so powerfully for — and the mourning following the absence of a touch that once held us.

I often think about how I am still in love with every person I’ve ever been in love with. After visiting the exhibit this weekend, I lay awake in bed at six am thinking about all of the ways that love, sexual or platonic, is so much more grand and all-encompassing than touch — it’s transcendent. It splits you open. It arrives inside your mouth. Your ears. Marks your palm, leaving a phantom sensation even when the scar is long gone. It is impermanent and imperfect. I look at the marble placed gently on the cloth, how it pins it down without fully taking away its softer, stranger form. I think of all of the ways that touching someone you want is never enough. I feel all of the ways that it is.

After Our Bodies Meet 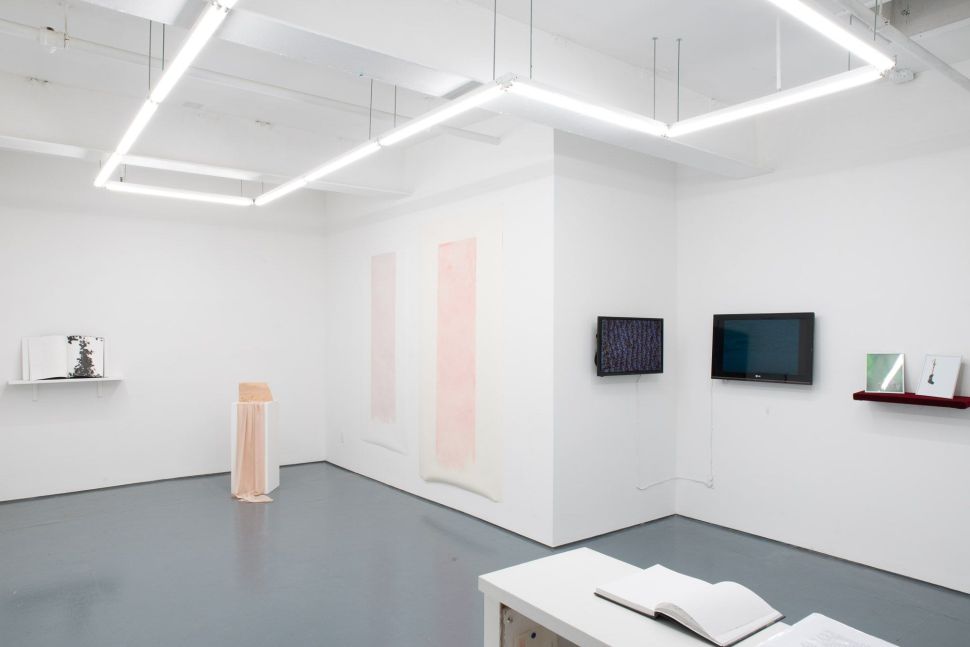