“Jack…saw a bald eagle with a white tail and crown floating on the surface of the . With its hollow bones and feathers, submergence was slow and difficult to watch. Jack thought he saw the bird blink before slipping just below the surface. Air bubbles unsettled the . The eagle was alive but drowning, motionless instead of struggling to live.”

The vivid description of that eagle dying appears early in Claire Holroyde’s apocalyptic novel The Effort. We never learn why the bird is sick or what happened to it. But its mysterious death seems, at first, to stand in stark contrast to the book’s title, and indeed to its plot.

The novel is about what happens when a comet is discovered on course for earth, and expected to strike in less than a year. Unlike that eagle, though, humanity does not give up. Instead, it sets in motion a furious, multinational, UN-coordinated plan to knock the comet UD3 out of orbit using a rocket with a nuclear payload. The Effort is led by American scientist Ben Schwartz with emotional and logistical support from his girlfriend, a scientific human resources expert named Amy.

The plot description makes it sound like this is an old-school, hard science-fiction novel, in which brave, competent men collaborate to solve earth’s problems with technical brilliance and know-how, cheered on by decorative female helpmates. If The Effort were penned by Asimov or Heinlein, Ben would be the hero, and the storyline would follow a breakneck, triumphant arc as he did his science thing and saved the world from global catastrophe. The eagle would probably be a bald eagle and flap its wings and soar out of the too, along with some commentary about the US being too noble to just roll over and perish.

Holroyde isn’t Asimov, though, and her storyline has less valedictory goals. After introducing Ben and Amy, Holroyde wanders away from them with a leisurely pace that belies the comet countdown. She provides the background and viewpoint of other people working on the Effort, particularly Love Mwangi, an East African-American translator who speaks dozens of languages. One of the main characters, Zhen, a quiet female Chinese scientist and math genius with facial scars and a hidden talent for defying authority, doesn’t show up till more than half-way through the book.

But Holroyde also travels off elsewhere, following a whole other cast of characters on an environmental Arctic expedition. The passengers include photojournalist Jack (who takes the picture of that eagle), the scientist Maya with whom he falls in love, and his roommate Gustavo, a Nobel Laureate indigenous poet of the Brazilian Wayãpi tribe.

The Effort also touches down in New York and Mexico City to follow the progress of civilization as the asteroid draws closer—or rather, to follow the devolution of civilization. As the end of the world draws closer, people panic, governments disintegrate, and food chains collapse. The asteroid doesn’t even have to hit to destroy the world; the mere threat of human destruction destroys human civilization, ushering in a second Dark Ages. If humans were that eagle, they wouldn’t lie in the ocean, waiting to drown. They’d reach up with their talons and claw their own eyes out.

Humanity’s self-immolation in fiction is for Holroyde merely an echo of its actual self-immolation. Jack is onboard the Arctic expedition because it’s the last one of its kind; the ship is chronicling climate change. But its funding has been cut by a never-mentioned but clearly alluded-to Trump administration. The expedition documents the further retreat of the ice, and other related and unrelated environmental catastrophes caused by poisons in the or the ice or the air.

Gustavo, too, has had his life shaped by the processes of planetary self-immolation. Brazil’s wealthy settler colonial class, in control of the government, is eager to strip resources from the rainforest where the Wayãpi live, unconcerned about the effect on global warming of destroying the world’s main carbon sink. As a byproduct, they also destroy the land and lives of Gustavo’s people, resulting in the death of his twin brother, among many others. The genocides of native peoples serve as a prelude, and as practice for, the big planet wide auto-genocide by environmental collapse. The comet brings civilization crashing down quicker, but Holroyde suggests we were already on our way without it. For that matter, Gustavo thinks the Wayãpi, as hunter-gatherers, may be better off in a post comet world. They are used to obtaining their own food in the forest, and nation states are no longer in a position to invade and murder them. Gustavo’s people faced an apocalypse already; maybe another apocalypse will save them.

The huge, united, competent Effort to destroy the comet is less united or competent than it initially seems. Ben, the fearless leader, becomes so neurotic that he screams at subordinates who let their beards grow because they remind him how time is passing and the comet is moving closer. Many people on the project work so hard, and under such stress, that they render themselves catatonic. Russia won’t share nuclear resources even faced with the end of the world. The US holds back too, as does China, until it’s almost too late.

Yet despite such stresses and reversals, The Effort, in the tradition of science fiction novels past, manages to sweep aside national, sectarian, and governmental boundaries to at least offer a glimmer of hope. It serves as a small, miraculous contrast to a world which, for the most part, simply folds its wings like that eagle and sinks when threatened with space debris, or with its own consumption patterns—or with a virus that Holroyde couldn’t have known about when she wrote the novel. Do we die with a bang, with a whimper, or both? Or do we find some way to live? The Effort suggests maybe all three at once. But Holroyde is aware that her novel is a story; her ending isn’t the real ending. That we’ll need to find for ourselves, one way or the other. 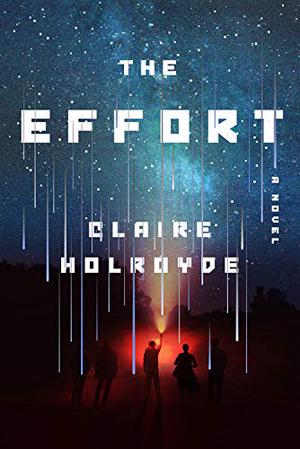