On Wednesday, Joe Biden was sworn in as the 46th president of the United States; a ceremony that was accompanied by all the pomp and circumstance that’s to be expected from our tradition-obsessed nation. Amidst the notable fashion moments, pop star performances and a Bernie Sanders meme, a traditional gift-giving ceremony bore genuinely interesting fruit: Dr. Jill Biden presented the newly-inaugurated president with Landscape with Rainbow, a painting that was completed in 1859 and which belongs to the collection of the Smithsonian American Art Museum. The painting was made by Robert Seldon Duncanson, the most widely-known African American painter in the years leading up to the Civil War, and the canvas has an otherworldly feel that suggests the Garden of Eden.

In addition to Dr. Jill Biden, the painting was also the gift of Republican senator Roy Blunt. “[The painting] is sort of this ‘classic America as a paradise’ painting that a lot of painters were doing then,” Blunt said during the gift ceremony, according to People. “For him, a Black artist, painting this painting that’s so much like an American utopia on the verge of a war that we would fight over slavery, makes all of that even more interesting…while he faced lots of challenges, obviously [he] was optimistic, even in 1859, about America.” Additionally, while he was alive, Duncanson’s artistic career was supported by American abolitionists, who purchased his paintings and bankrolled a trip to Europe so that he could study with the Old Mas​ters.

Certainty that the future will involve change, ease and happiness is a deeply American trait; since the inception of the nation, countless hopes have been pinned upon the concept of the next frontier. Joe Biden receiving this painting as a gift symbolizes that his presidency is expected to return peace and utopian stability to a deeply wounded country, and that’s an extremely tall order. 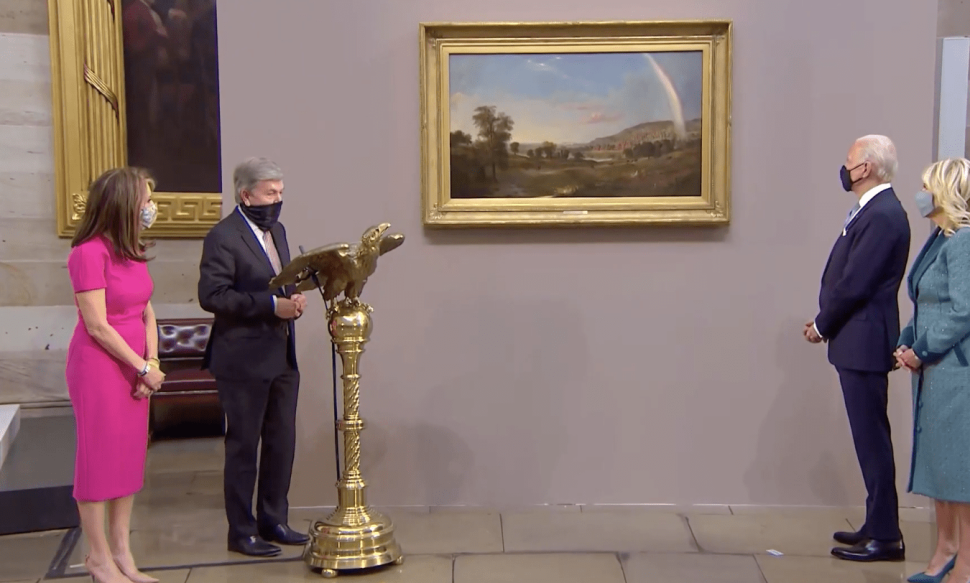