After traveling through time from the 24th century to the 32nd century at the end of season two, the U.S.S. Discovery crew spent four episodes regrouping and searching for the headquarters of the United Federation of Planets and its military-exploration branch, Starfleet. In episode five, they finally reach their destination and marvel at the state-of-the-art ships docked there. To capture the characters’ wonder and relief, episode director Maja Vrvilo employs one of the series’ signature visual touches: a montage of reaction shots from the bridge crew.

For Star Trek: Discovery’s critics, bridge crew reaction shots encapsulate the show’s problems. Where Trek established itself as a franchise with heady concerns, Discovery is openly sentimental, often depicting its characters crying, hugging and smiling. But in the series’ third season, emotional moments enable Discovery to do what Trek has always done: comment upon our political reality.

In the (even farther) future, Discovery’s crewmembers find that their beliefs are as outdated as their tech. A mysterious cataclysm has rendered warp travel nearly impossible, and most planets have turned isolationist and hostile. With Earth and other key worlds withdrawing, the United Federation of Planets has been reduced to a weak coalition, its power vacuum filled by a criminal syndicate called the Emerald Chain. Most people simply look out for themselves, dismissing those who espouse Federation principles as “true believers,” idealists out of step with the real world.

For Americans who watched Discovery‘s third season as it was released during the final months of the Trump administration, it’s hard to miss comparisons between the beleaguered Federation and our own embattled democracy. The weekly adventures of Commander Michael Burnham (Sonequa Martin-Green) and her crewmates provided less of a reprieve from the news and more of an alternate perspective, one that promised that we can overcome forces that threaten our ideals. Star Trek: Discovery’s perspective is all the more important now that a new administration has begun and, with it, the work that all Americans must undertake to restore our democracy.

OK to Be Not OK

While Discovery, like all Trek shows, offers a utopian vision of the future, it never ignores its characters’ pain. Season three devotes ample screen time to the crew dealing with their trauma, most explicitly in the story of pilot Keyla Detmer (Emily Coutts). Although she successfully crash-landed Discovery when it arrived through time, the pressure of the moment, combined with severe injuries sustained by her crewmates, left Detmer mentally scarred.

In episode four, Captain Saru (Doug Jones) attempts to relieve pressure by throwing a bonding banquet for his officers. All goes well until Detmer breaks down, recalling images of her crewmate Stamets (Anthony Rapp) and his bloody injury. Cutting between shaky close-ups on Detmer as she spits out descriptions between fits of inappropriate laughter and wide shots of the shocked and disgusted crew, episode director Hanelle M. Culpepper and writers Alan McElroy, Chris Silvestri and Anthony Maranville capture the tension between Saru’s desire to move on and Detmer’s mental illness.

The episode’s A-plot expounds on the theme by following Burnham’s work with new character Adira Tal (Blu del Barrio), a teenaged genius with an alien symbiont in their body. (Adira is non-binary, as is Del Barrio; both use they/them pronouns.) The symbiont carries the memories of all its previous hosts, including Starfleet Admiral Tal, but Adira cannot access them because they refuse to recall their final moments with the symbiont’s most recent host, their boyfriend Gray Tal (Ian Alexander). To recover Admiral Tal’s memory, Adira must confront and work through the pain of losing their beloved.

Both plots dramatize the importance of acknowledging hurt as part of moving forward. We Americans must keep that in mind in the coming years. Not only has the Trump administration’s mishandling of the government resulted in massive casualties from COVID-19, but active anti-immigration policies, anti-LGBTQ+ policies and violence from hate groups spurred by the former president have ruined lives. Biden’s initial Executive Actions may undo some of those policies, but the damage has already been done, and we need time to deal with that hurt.

To meaningfully undo the damage caused by Trump’s presidency, we need to face the white supremacy in our country. From lawmakers disenfranchising voters to hate groups attacking others to the recent storming of the U.S. Capitol, people across the country have fought to concentrate power among white Americans. Much of that impulse is driven by simple hatred and desire for power. But it comes from a racist, homogenous worldview that Star Trek has always opposed within the bounds of its science fiction.

Even when it was primarily a show about three white men, Star Trek has espoused the values of “infinite diversity in infinite combinations.” No series has embodied that slogan better than Discovery. In addition to featuring a Black female lead (albeit one who does not become Captain until the end of season three), Discovery has a thoroughly multi-racial and multi-gendered cast, with numerous body types among its main characters.

That devotion to diversity drives one of the season’s most satisfying storylines, involving Stamets’s friendship with Adira. Although the cranky scientist initially resents the teen wunderkind, he quickly sympathizes with their plight, and eventually Stamets and his partner adopt Adira.

The duo solidifies their relationship in a lovely scene from episode eight, after Adira confesses confusion from the multiple memories inside their head. After quietly listening, Stamets gestures to a piano and invites Adira to use their newly acquired musical knowledge to accompany him on the cello. In the middle of an episode about space mobsters and animal empaths, director (and longtime Trek mainstay) Jonathan Frakes takes time to let Stamets and Adiria make music together.

That scene reminds us why white supremacists and authoritarians try to destroy democracy. In its purest form, democracy says that every person matters, in all of their messiness and confusion and differences. Every member of our community matters and when these infinite configurations harmonize together, they can make beautiful music.

Illuminating the Future With the Past

But as Discovery’s portrayal of trauma reminds us, diversity can only flourish when those who would destroy it are held responsible for their actions.

Throughout the third season, characters make hard decisions to protect their values. That includes Starfleet Admiral Vance (Oded Fehr), the officer barely keeping the Federation together. Vance’s most challenging moment comes in the season’s penultimate episode, in which Emerald Chain leader Osyrra (Janet Kidder) proposes a treaty that would unify the Chain and the Federation.

Vance sees the value of Osyrra’s offer, which would bring peace and restore the Federation to its former glory. But he refuses to sacrifice Federation values for momentary power, requiring the Chain to outlaw slavery and to relinquish influence over vulnerable planets. More importantly, he demands accountability. Before the union, Osyrra must step down from her leadership role and be tried for her crimes.

“You’re staring at the past,” Osyrra protests; “I’m drawing you a map to the future.”

“The past is the only light by which we can see the future.”

The exchange has more than a little correspondence with real debates happening in Washington right now, as lawmakers consider convicting Trump and expelling members who encouraged sedition. While some insist that we should move on and let the past be the past, Vance’s argument puts Congress’s task into focus. For our values to have meaning, they must be shown to work, which sometimes involves punishing those who violate those ideals.

We all hope the new administration can work to repair the damage done to our institutions. But democracy never rests on a single party or person. It requires all of us to fix the problems exacerbated by the previous president, problems as old as America itself.

That work involves a lot more than watching a sci-fi TV show. But when we lose hope, when we feel tired, when we wonder what we’re fighting for, we can always turn to shows like Star Trek: Discovery. Given the struggles of the crew and our own ongoing battles, reaction shots of the smiling crew feel less like a distraction and more like an act of defiance, a reminder that our work is never done alone and that there’s always comfort in community, even out on the final frontier.

Star Trek: Discovery is available to stream on CBS All Access. 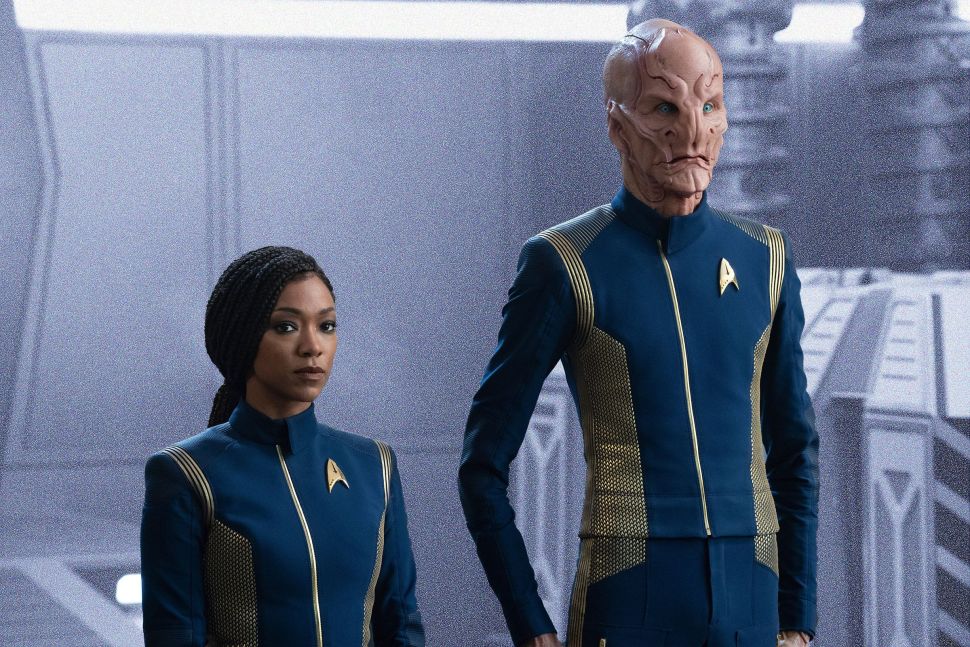