The Metropolitan Museum of Art (MET) is celebrating its 150th anniversary and a cancelled MET Gala with a postponed exhibit About Time: Fashion and Duration, by The Costume Institute which traces fashion since the museum’s inception in 1870. Curator Andrew Bolton rendered this display unique with excerpts of Virginia Woolf’s novel Orlando read aloud throughout the exhibit by Meryl Streep, Nicole Kidman, and Julianne Moore and a conceptual illustration of Henri Bergson’s “la durée,” or duration. Entering the exhibit is a wholly immersive experience, transporting the viewer, with a literal ticking clock, into the past and the present concurrently in sixty “minutes” of progressive and cyclical fashion in all black, indulging on the timelessness of the garments’ elements.

Each work displayed in linear fashion to time is placed in parallel to a more recent work connected in an element of fashion – – for instance, a 1927 Jeanne Lanvier robe de style evening dress paired next to a 2020 Jonathan Anderson for Loewe dress with the same built-in panniers at each hip. The all black exhibit’s grand finale is a surprise: a white upcycled patchwork lace Viktor & Rolf 2020 haute couture collection dress such that the viewer walks away with a message promoting sustainability in fashion.

The exhibit, which ends with a clear statement over a question, brings into question the role of large art institutions such as the MET, especially in the frequent absence of adequate government policy on climate change, as players in the fight for environmental justice as well as other human rights movements. Are museums combating foundations frequently built on and supported by the pillars of capitalism, consumption and power?  Is it even possible for such large institutions to do so? How can museums look inward and rebuild themselves to create systemic change within their own structures and thus, societal impact?

Art museums undoubtedly are being called upon to reduce their own large carbon footprints (the MET uses the same amount of electricity as 10,000 homes) from transporting art, conserving it, to keeping the buildings themselves running, but they are also being called upon, as cultural institutions to use their influence on the masses to promote education on contemporary issues and their impact on society.  In fact, they were included as a partner in the United Nations’ Sustainable Development Goals in 2019. This presents a complex challenge to an industry that has been deeply fraught with intersecting challenges around racial justice, class, imperialism and gender issues. Is the art world changing directions, and if so, with the clock ticking, is enough being done?

Museums have approached this issue differently. Some are changing the art itself. In 2018, The Leonardo DiCaprio Foundation, a known environmental justice organization, partnered with the Los Angeles County Museum of Art (LACMA) to transition Chris Burden’s Urban Light sculpture to LEDs, directly preventing the release of a projected 5 million pounds of carbon dioxide emissions over a decade.  The MET has focused on the building itself, as it partnered with city government to retrofit over 4,000 light sculptures to LED lamps, and New York City passed The Climate Mobilization Act in 2019 which tasked thirty-three museums with cutting emissions in half by 2030.

As Bolton did, many museum curators are similarly dedicating space and time to exhibits directly focused on climate change. Mass MoCa featured an exhibit called How to Build a Landscape by artist Blane De St. Croix which ventured beyond traditional art forms such as painting – including his own research in the Arctic Circle and Gobi Desert, interviews of scientists on climate issues and three story experiential sculptures. And in Amsterdam, US-based studio Local Projects opened an interactive museum called Fashion for Good aimed directly at changing visitors’ buying habits and encouraging impactful behaviors.

In 2020, with people stuck in the confines of their homes, slow fashion has emerged as a climate change buzzword more than ever. The COVID-19 pandemic has and continues to endanger the fashion industry – as companies scramble to manage short-term economic distress at the potential expense of halting sustainability efforts. This makes Bolton’s exposé, which was also commended for its response to the Black Lives Matter movement, more relevant than ever.  He told Fashionista, “We ended the exhibition with the dress because the patchwork design seems to serve as an apt metaphor for the future of fashion and the importance of community, collaboration and sustainability.”

Experts tell us that sustainable fashion ventures to a commitment level beyond reusing old materials or biodegradable fabrics; the principle of sustainability must be involved in all stages of a piece’s life cycle. This includes designing, raw material production, manufacturing, transport, storage, marketing and final sale, to use, reuse, remake and recycling. About Time’s subtle point towards a sustainable future in fashion may not be enough.  Many would argue that arts and activism goes beyond what some would consider optics. LED lights and exhibitions with an environmental or race “edge,” and sustainable investments are a start, but climate change is a crisis that waits for no one. In order to make lasting and effective change, these systems must be broken down and rebuilt with sustainability in mind every step of the way —  and sustainable choices may not always bring in more money.

About Time tells us about the importance of sustainability – but how much energy was consumed in putting the exhibit together? A message presented as a grand finale is far less powerful than one that is central – one that is presented as the fabric of an exhibit, a museum building, or an organization itself. While no one can disagree that About Time was a genius work of art, time and fashion that visitors relished at, it also illustrates that the exhibit itself fell into the trap of the very actions (or lack of action) they were attempting to critique.

Organizations in the field are aiming for collaboration amongst stakeholders in the museum community. The UK Arts and Humanities Research Council launched an international design competition called Reimagining Museums for Climate Action on International Museum Day in 2020 that invited museum professionals to rethink the design, purpose and experience of museums globally, with 264 entries from 48 countries, and winners will be hosted at the UN Climate Change Conference.  The American Alliance for Museums has also spearheaded the way in assisting museums with holistically approaching green practices and running The Sustainability Excellence Awards annually to encourage these practices.

In regards to current prioritization of environmental justice, a spokesperson from the MET did not comment on specific initiatives but responded, “The Met is examining all aspects of increasing sustainability in managing our facilities, exhibitions, visitor services, events, et cetera. It’s an ongoing process and one to which we are deeply committed.”

Bolton recently wrote for Vogue – “Every decision that I make going forward has to be informed by race and ethnicity and gender and sexuality. The awareness can’t go away; this is a lifelong commitment.”  Commitment to climate change and environmental justice is inseparable from these issues.

About Time reminds us that time, beyond its poignant relationship to fashion, progresses linearly, repeats itself, can keep us stagnant, or can demand we change. It also reminds us that the clock is ticking; our time is not infinite or limitless, and crises do not wait for us to get it together, whether it be about race, gender or the environment. Let this timeless exhibit be a message to urge art museums themselves to collaborate and unleash their power to harness change. 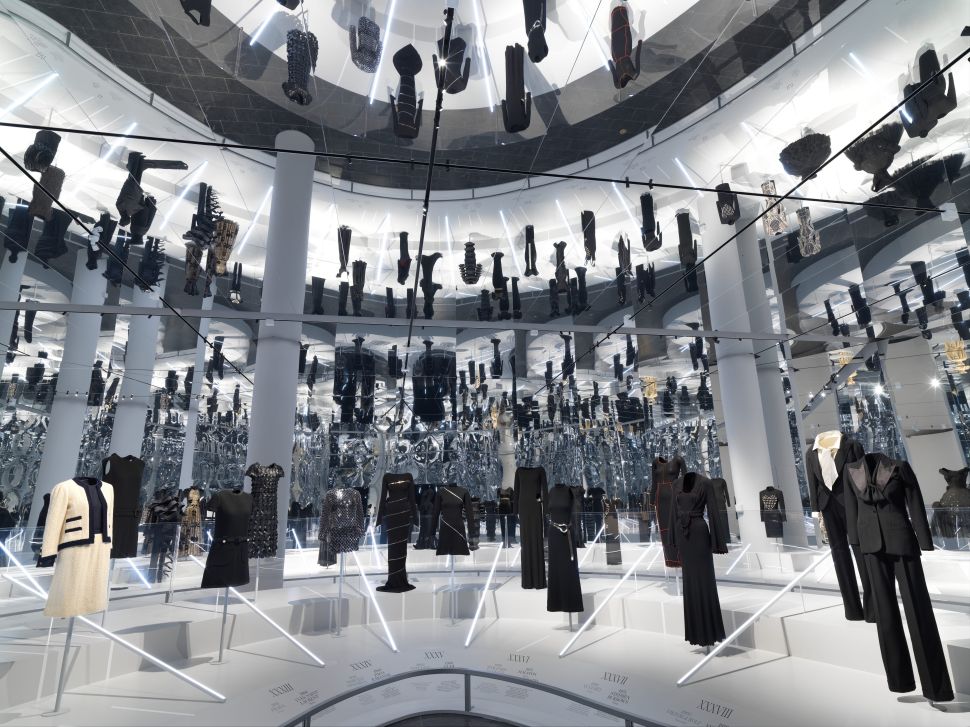