There might have been a more boring and worthless movie in 2020 than The Midnight Sky, starring and directed by George Clooney, but if there was, I luckily missed it. This weird, convoluted and utterly pointless farrago of wasted time and missed opportunities really defies description, but without any plot worth mentioning and reduced to kindergarten basics, it presents a bleak, depressing and hopeless future set, for no explicable reason, in 2049. As movie years go, it might as well be a Buck Rogers serial from the beginning of sound.

Three weeks after an unexplained global catastrophe called simply “the event” destroys the planet Earth, the crew members of an arctic space center called the Barbeau Observatory go home to die, leaving behind a terminally ill astrophysicist named Augustine Lofthouse, played by a white-bearded, droopy-eyed George Clooney, who looks like a cancer-ridden Santa Claus and acts with the emotional energy and frozen drive of a department-store snowman. Augustine spends his days playing chess, giving himself blood transfusions, and acting out a collection of dull cliches from every sci-fi epic you’ve ever seen, from Steven Soderbergh’s deadly remake of Andrei Tarkovsky’s Solaris to Alfonso Cuarón’s Gravity, both of which also starred Clooney.

There are plenty of flying meteors, but no real human beings to root for or care about. Until, that is, Augustine learns he is not alone. There’s also a 7-year-old girl on the premises (moppet newcomer Caoilinn Springall), the sole remnant of the station’s former occupants, accidentally left behind when they went off to die.

Here, this desultory would-be epic splits into stories. From another planet where the air used to be breathable, a spaceship called the Æther (pronounced “ether,” which this movie has plenty of) emerges, involving a crew of astronauts heading back to Earth, unaware it has been poisoned by a new global threat more lethal than COVID-19. Trying to alert them to his young ward’s existence so they can rescue her, Augustine is forced to leave the arctic station and transport the child through a titanic storm, to find another arctic station with a stronger transmitter that can send and receive a better radio signal. Their journey takes them through a savage weather calamity and the disastrous loss of Augustine’s transfusion equipment, but is unaccompanied by any explanation of what happened, what’s going on, or why. This is a blessing in disguise, because what little dialogue there is in the fermented, disorganized screenplay by Mark L. Smith (The Revenant) is superfluous enough already.

The two-hour running time seems like two years as it drags on indefinitely. Adding to the confusion are dream sequences, flashbacks and meaningless babble about space vessels, alien life forms and mechanical devices used to navigate extraterrestrial life. If nothing else, a good sci-fi action thriller with abstract ideas about the end of mankind should at least be fun. This one is about as clever as an animated cigar box. Clooney obviously grew up on sci-fi comic books, but he doesn’t display much knowledge about how to transfer what he liked as a child to the screen. With his digitally altered voice and his welcome underplaying, he’s more interesting than usual as an actor, but as a director he reveals little to no aptitude for pacing, editing or narrative tension.

Augustine and the child finally connect when they discover they both hate green peas, but a new level of idiocy is reached in the parallel story about the lost space ship when the doomed astronauts burst into a musical number and sing “Sweet Caroline.” Think twice before you sign up for that forthcoming tourist flight to outer space they keep advertising on TV. According to The Midnight Sky, it will be boring as branch when you get there. 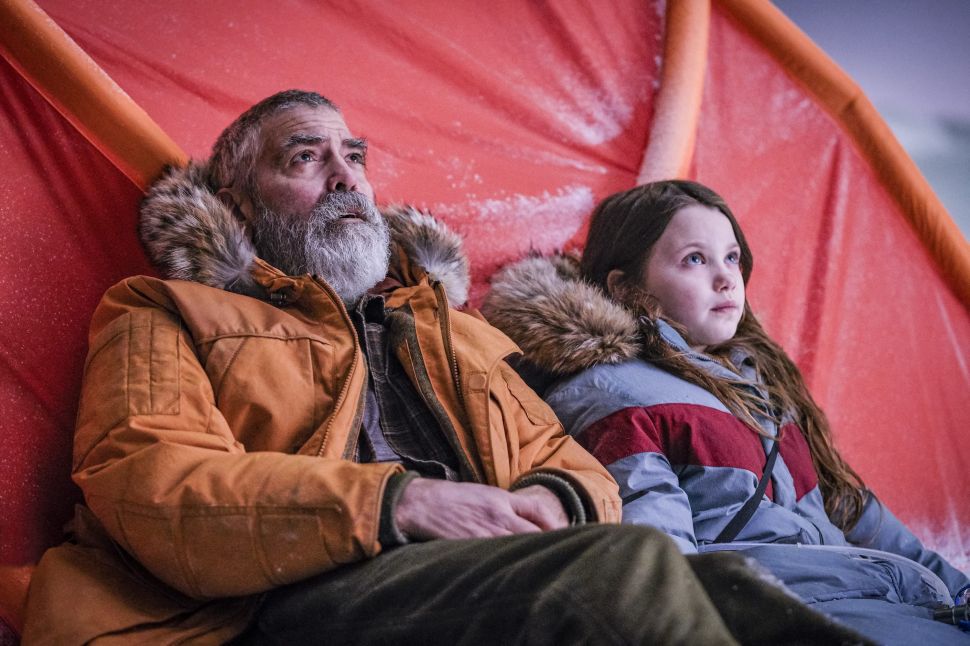