My grandmaster chess coach told me I should’ve just ignored the puke. At the age of 10, while competing in a national chess championship in Orlando, Florida, the Mickey Mouse–shaped chicken nuggets stopped agreeing with an anxious young player at the board next to mine. My opponent and I continued to play while holding our noses, but with the help of the adult proctors we eventually transferred locations, bringing our board with us. I prevailed in the match, but at the post-game review with my coach—also known as “skittling”—we realized, to his displeasure, that one of my knights was not replaced on the board during the relocation.

“You never move!” my coach told me in his thick Russian accent. “Even if the kid pukes on your board!”

Netflix’s chess sensation The Queen’s Gambit—based on a novel by Walter Tevis—made the prudent choice to overlook such indelicacies. In fact, it paints its lead character Beth Harmon (Anya Taylor-Joy) as a girl who becomes a glamorous denizen of postwar America regardless of her chaotic and alcohol fueled existence. Cinematographer Steven Meizler, costume designer Gabriele Binder, and production designer Uli Hanisch have all received copious praise for their careful creation of the world of Beth Harmon. Buzzfeed even ranked her outfits, “from ‘cute’ to ‘damn, checkmate.’”

The best parts of The Queen’s Gambit, though, were those grounded in the game itself, thanks to chess consultants Garry Kasparov and Bruce Pandolfini. In addition to using real matches as the basis for many of Harmon’s games, Kasparov and Pandolfini did not ignore the drab side of chess, mostly through Harmon’s rival-turned-supporter Benny Watts (Thomas Brodie-Sangster). When Harmon meets Watts in the high-profile U.S. Championship, they play in a run-down college auditorium. When she travels to New York with Watts to study for a tournament in Russia, the two stay in his subterranean, sparsely decorated apartment. To pay for his place, Watts wagers on speed chess and hawks his book to anyone listening.

Simply being one of the best chess players in America, in 2021 or 1960, won’t make you rich. Players train relentlessly for years to get to that level; unlike in The Queen’s Gambit, chess boards don’t magically appear on ceilings to guide careful observers to victory (or at least they never did for me).

While Kasparov’s and Pandolfini’s influences reference the dingy underbelly of the professional game, the series doesn’t take us all the way there. I was no Beth Harmon, but I do have some experience with the competitive chess circuit; the best moment in my short chess career was winning the K-3 New York City championships, held in a grungy hotel in the shadow of Penn Station, which on that day also played host to nervous parents and weary tourists.

While training for tournaments, I spent a significant amount of time at the Marshall Chess Club, whose swell West 10th Street address belies its dreary interior. (The club acted as the setting for some scenes in the chess movie Searching for Bobby Fischer.) Many of the world’s best players frequently dropped by the Marshall—and you could tell which paid more attention to their personal hygiene than others.

Though not always serious about their deodorant, these players are deathly serious about their chess. Cheating on the professional level is considered a grave sin, but when outliers have been caught, it has been in a properly campy way. In 2019 grandmaster Igors Rausis was caught checking his phone for help—there is a photograph of him doing so while on the toilet. Another grandmaster, Tigran L. Petrosian (no relation to Soviet grandmaster Tigran V. Petrosian), overperformed at the 2020 Pro Chess League Finals (held remotely), compelling one of his opponents to hint in an online forum that he suspected Petrosian of cheating. Taking affront, Petrosian responded with an unhinged rant, writing back “Are you kidding ??? What the **** are you talking about man ? You are a biggest looser i ever seen in my life ! You was doing PIPI in your pampers when i was beating players much more stronger then you! You are not proffesional, because proffesionals knew how to lose and congratulate opponents, you are like a girl crying after i beat you!”

The Queen’s Gambit gets it mostly right when it portrays chess as grim and a little seedy and wrong when it focuses upon the glamour of Harmon’s life. The show has sparked a renewed interest in the game. But while its new players might emulate Harmon and her final outfit on the show—dressing like a queen—even the best chess players eventually have to be satisfied with being pawns. 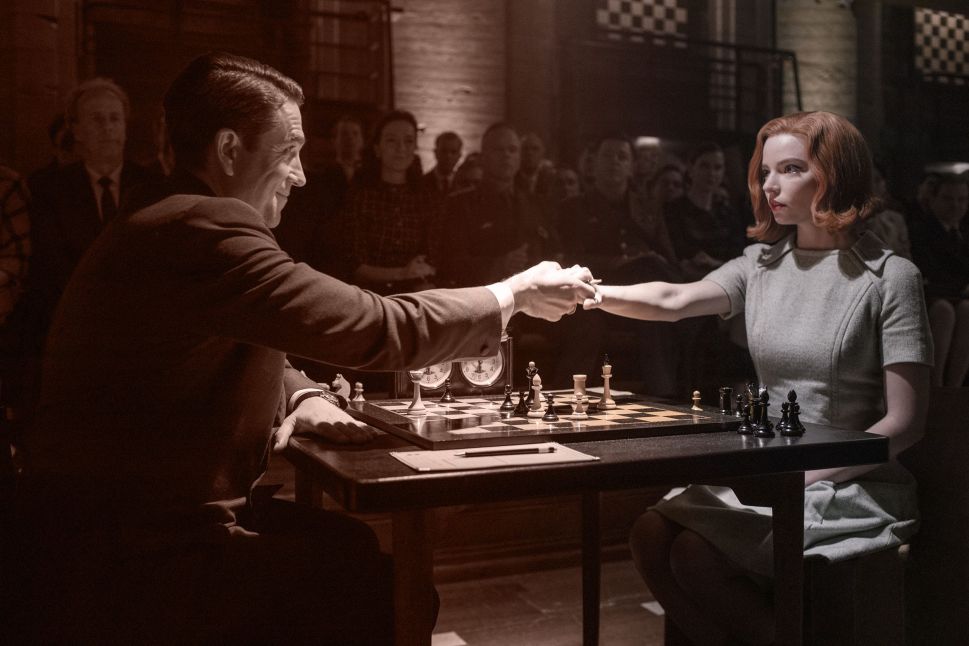