Sometimes, something as simple as a change of scenery can reinvigorate a familiar franchise. Both the original Star Trek and Star Trek: The Next Generation were set on starships traveling the galaxy. That formula was re-engineered for Deep Space 9, which found great drama on a space station locked in contested territory. Sometimes, remodeling the same character can help extend their lifespan. The Frasier we meet in Cheers is a beer-drinking, sports-loving practical joker who wears his emotions on his sleeve. But the Frasier of Frasier is virtually unrecognizable as a more serious-minded intellectual who plays things close to the vest. Sometimes, an overhaul of the structure can generate new possibilities. The Doctor Who revival has changed dramatically under each new showrunner, shifting from a big-hearted episodic fantasy to a more serialized and cinematically arc-focused tale and then to whatever is going on now.

Evolution is a necessity and WandaVision, the first blockbuster Marvel series to arrive on Disney+ following 23 theatrical movies over the last 13 years, attempts all three developments at once. And it works…depending on your vantage point.

As a Marvel fan, I naturally assumed I would enjoy WandaVision thanks to the studio’s consistently high floor. The producer-driven model Kevin Feige has masterminded has its drawbacks, but it rarely misses expectations. In reality, though, WandVision works best precisely because it is unlike anything the MCU’s model has ever produced before.

The series takes place after the events of Avengers: Endgame, yet finds Wanda (Elizabeth Olsen) and the deceased Vision (Paul Bettany) alive, together and living out a seemingly idyllic suburban small town life while trying to conceal their powers. Joining them is their nosy neighbor Agnes (Kathryn Hahn), who knows more than she lets on, and an all-grown-up Monica Rambeau (Teyonah Parris), last seen as a child in Captain Marvel.

Driving the intentionally askew narrative cooked up by showrunner Jac Shaeffer is the design and delivery (kudos to director Matt Shakman for the stylistic versatility). Each episode amalgamates various sitcom motifs and tropes from across the latter half of the 20th century, complete with black-and-white colorization, laugh tracks and familiar TV hi-jinx (dinner with the boss!). Bettany has said he took inspiration from Dick Van Dyke and Hugh Laurie for his more slapstick version of Vision, who differs from his big screen counterpart. Other early small screen influences for the show include I Love Lucy, My Three Sons and Bewitched. WandaVision fully commits to the bit, rarely pulling back the curtain over the first three irreverent episodes provided to critics.

This runs the risk of alienating large swaths of casual audiences, but WandaVision expands the scope of MCU storytelling—experimenting with form and function. It’s helpful if viewers know exactly what they’re getting into as they fire up the new series this Friday, especially since Marvel intended the far more traditionally action-packed Falcon and the Winter Soldier to be its Disney+ launching pad.

“We will lie to you and you will believe our little deception.” -Vision in ‘WandaVision’

Because of the MCU’s interconnected storytelling, we cannot absorb WandaVision without considering the chapters that came before. For those that want more of the same, WandaVision’s first three episodes will most assuredly feel slow, as it hones in on the couple’s avant-garde suburban life with just occasional references to anything beyond its line of sight. For those of you excited by the prospect of disassembling Marvel’s formula, which can occasionally taste flavorless, WandaVision is the remedy. It’s a fantastical, time-hopping conspiracy at an intimate scale—off-beat and low-stakes in comparison to the recent Avengers saga. It’s deliberately and refreshingly weird, with the themed introduction changing as episodes zip through different decades, along with the clothes, design, and directorial style.

Where The Mandalorian, Disney+’s other big budget franchise series, stages each episode like a mini-blockbuster, WandaVision is a slow burn aimed at its central premise. But at roughly 25 minutes an entry, it’s more than survivable for anyone who isn’t initially on board. By the end of the third episode, the overarching mysteries begin pushing toward the center and you get the feeling that WandaVision is indeed building to a more expected Marvel climax over the final six installments.

The idea of being lost outside of reality and of Wanda’s mental state as she grieves Vision and overcomes the trauma of being snapped in and out of existence is mirrored by the fake commercials running throughout the show. The spokesman for one Stark industry toaster product proudly states, “Forget the past. This is your future.” Ominously relevant, no?

There’s a bit of cheeky derangement to WandaVision, a crazed undercurrent that reminds you that there is something wrong with this world. It’s the odd behavior of its inhabitants, ignoring what’s in front of their eyes and harboring hushed secrets. It’s the real world bleeding through the radio, threatening to reorient our heroine. At times, it feels as if this existence is coming apart at the seams.

Vision, malfunctioning while putting on a magic act for a town talent show, provides a bit of a thesis statement when he tells the audience “We will lie to you and you will believe our little deception.” It’s one degree away from the awareness needed to shatter the illusion of this faux-world created within WandaVision. Those moments that brush up against clarity help turn the standard MCU machinations inside-out.

That doesn’t mean the more straightforward elements aren’t present as the series connects to mysterious entities like S.W.O.R.D., Doctor Strange in the Multiverse of Madness, and other more familiarly grounding landmarks. How Schaeffer and her team bring all of these disparate threads together within this off-kilter world will decide the ultimate fate of WandaVision. 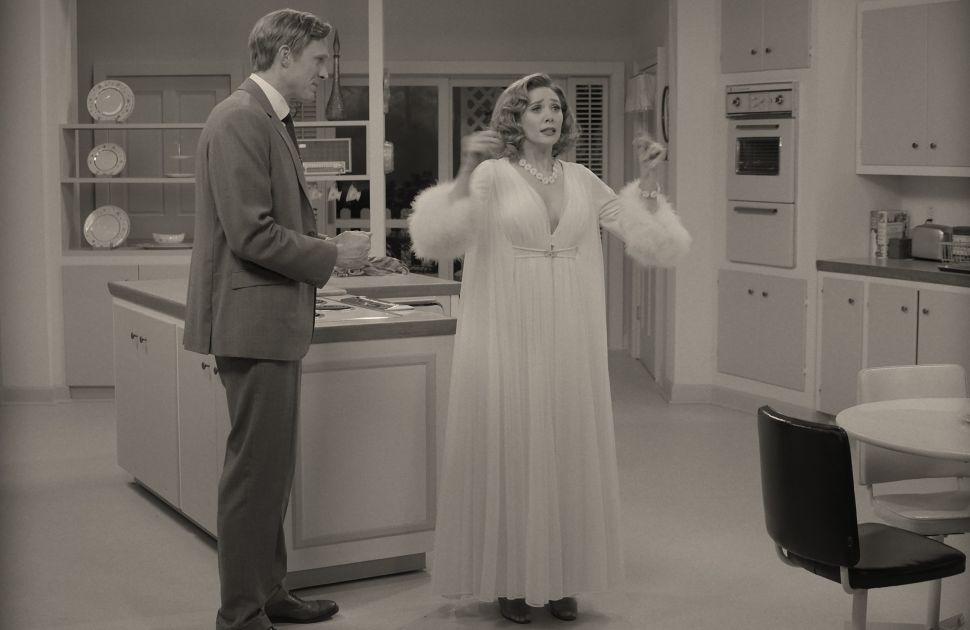