I can’t help but think how wildly confused the first fish that managed to climb out of the primordial ocean and onto land must have been. Everything would have been so new, different and hilariously difficult to comprehend. It’s not entirely different from where we are with Wonder Woman 1984 at the moment, a film that represents the first divergent development of its kind for theaters and streaming.

Warner Bros. released Wonder Woman 1984 in theaters (around 35% of domestic exhibitors are currently open) and on streaming service HBO Max in the United States on December 25. Overseas, the film hit all open theaters as Max is not yet operational in international territories. Never before has a movie of this size and scale been made available via theaters and a streaming video on demand (SVOD) service at the same time en masse.

Ten days later, we’re still trying to evaluate whether or not this hybrid model worked. Let’s break it down.

Wonder Woman 1984 at the Box Office

Wonder Woman 1984 carries a production budget of around $200 million with marketing costs that easily eclipse $100 million. The multiple release date delays forced by the coronavirus pandemic cost a pretty penny as well. After 10 days in theaters, 1984 has accumulated $118.5 million in global ticket sales, including $28.5 million domestic. This would be disastrously slow going under normal circumstances. In 2020, it is perhaps the best of of a bad situation.

After a pandemic-best $16.7 million opening over the Christmas weekend, 1984 plummeted 67 percent in its second weekend with just $5.5 million domestic. That kind of falloff puts it in the same vicinity as polarizing blockbusters Batman v Superman: Dawn of Justice (-69%) and Star Wars: The Last Jedi (-67%), both of which underperformed financially relative to external expectations. The significant second week drop may be due to 1984‘s lukewarm reception, spiking COVID cases, or its availability on HBO Max may have cannibalized theatrical ticket sales to a greater degree than expected. We just don’t know yet.

WB also released Tenet, another $200 million tentpole, earlier this year. With nearly $363 million in worldwide ticket sales, the film stands to lose the studio up to $100 million. However, 1984 is playing the long game at the box office with a presumed extended run in theaters and (hopefully) an improving public health situation. It’s also serving as a sign-up beacon for HBO Max, which drastically changes the model of evaluation. We wouldn’t judge a dog solely on how well it fetches a Frisbee. If we evaluated the film on its box office performance thus far, it would be a failure. But that’s not the reality of the situation.

According to ANTENNA data, Wonder Woman 1984 (HBO Max) and Hamilton (Disney+) are the two most impactful SVOD releases of the year, in terms of subscriber acquisitions in their opening weekends. In terms of U.S. growth, Wonder Woman 1984 drove 40% more gross adds to HBO Max in its Christmas debut than Hamilton did for Disney+ over its July 4 bow, per ANTENNA. 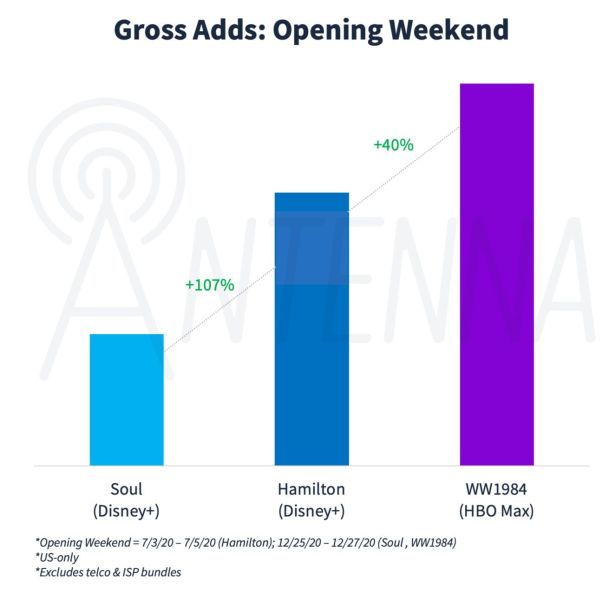 According to data from market-research firm Apptopia provided to Bloomberg, an estimated 554,000 signed up for the HBO Max app from December 25 (Friday) to December 27 (Sunday), with a record 244,000 sign-ups on Sunday alone. This only accounts for mobile devices and does not include smart TVs, Roku, or Amazon Fire sign-ups. Disney+, which is available overseas unlike HBO Max, collected 2.3 million global mobile app downloads during the Christmas weekend of Soul’s release, per the same report.

As of December 8, HBO Max had 12.6 million total activations. From October 22 (8.6 million) to December 8 (12.6 million), HBO Max gained 4 million new active subs (+46.5%). Fast and loose ballpark math here, but if Max increases by the same number or percentage over the same seven-week period, it’s looking at between 16.5 million-18.5 million activations by February. If we factor in a Wonder Woman 1984 boost, which ANTENNA data seemingly confirms, the platform will likely surpass 20 million activations by AT&T’s Q4 earnings report on January 17. WarnerMedia also reached much-needed distribution deals with Amazon Fire and Roku in recent weeks, which combine to service 80 million U.S. users. The potential subscriber pie is growing.

HBO proper and HBO Max combined for 38 million subscribers as of November, slightly more than 5% increase compared to 2019, per AT&T earnings. As such, we can safely say that there are still tens of millions of existing HBO subs who have not converted to Max at no extra cost. WarnerMedia surely wants to convert the remaining HBO customer base while attracting new money subs.

What WarnerMedia had to say about Wonder Woman 1984

On December 27, WarnerMedia provided vague descriptions of Wonder Woman 1984’s streaming success. In a press release, the company said nearly half of HBO Max’s retail subscribers viewed the film on the day of its arrival, along with millions of wholesale subscribers who have access to HBO Max via a cable, wireless or other partner service.

Retail subscribers are users billed by WarnerMedia or a third party in-app service, such as subscribing through Apple TV. Wholesale comes via a wholesale distributor, such as logging into Max via cable credentials. Activations are retail subs plus wholesale subs who login into HBO Max, thus ‘activating.’

Executive Vice President and General Manager, WarnerMedia Direct-to-Consumer Andy Forssell said in a statement that “Wonder Woman 1984 broke records and exceeded our expectations across all of our key viewing and subscriber metrics in its first 24 hours,” but did not provide any further specifics.

The Verge’s Julia Alexander provided some quick math estimates for viewership last week on Twitter based on WarnerMedia’s nondescript announcement.

So if we assume roughly same percentage (and this is a big assumption as it could be more because of recent news), then ~42%~ of 12.6M is 5.3M. Nearly half of Max's retail subscribers watched on day one, about 2.65M?

(This doesn't include all other subs, so very very tiny pool)

What the other surveys say

According to data provided to Observer by TV Time, a multi-platform, virtual TV tracking community of millions of users that use the app to track and react to the cable, broadcast, and OTT show they’re watching, Wonder Woman 1984 was the most-watched movie among its U.S. user base from December 25-December 28, ahead of Disney+’s Soul.

According to a Screen Engine survey results provided to The Hollywood Reporter, Wonder Woman 1984 was the most-watched SVOD film in its first week of 2020, edging out Hamilton and Soul on Disney+. While this sounds feasible as WW1984 is the biggest blockbuster film ever to be made available directly on streaming, it’s worth noting that surveys vary from data metrics. The hope is that surveys, where individual participant responses can’t always be verified, can be representative of larger viewing trends and therefore lead to extrapolations that can be applied to a larger population.

Regardless of which metric or data point you use from the above intel, it’s safe to assume that Wonder Woman 1984 was a success for HBO Max.

The challenge of churn after Wonder Woman 1984

The most critical factor for HBO Max moving forward will be retention versus churn, which is the number of customers that cancel their subscription in a given period.

These graphics from ANTENNA Data highlight the impressive customer loyalty garnered by market-leading streaming services such as Netflix. If HBO Max can lower HBO’s existing churn rate to around 5%, closer to Netflix and Disney+, it’ll be in great shape. The industry average churn rate sits at about 6%. 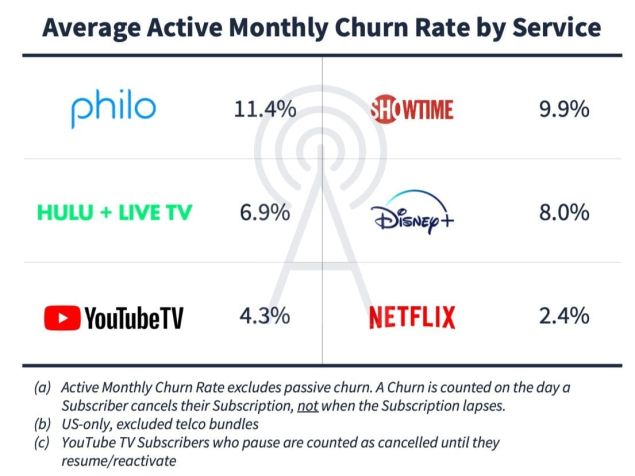 Put another way, how does HBO Max keep new subscribers who only signed up to watch Wonder Woman 1984 within its ecosystem? Which pieces of content convince new subs to stick around long-term?

Original programming is what helps most drive new subscriptions in the streaming arena. That’s an area HBO Max is still developing which is why it was the primary factor behind the decision to shift Warner Bros.’ entire theatrical slate to HBO Max. Attractive legacy programming, such as Friends, is what helps keep churn rates low and HBO Max has a stellar library of pre-existing content to choose from. 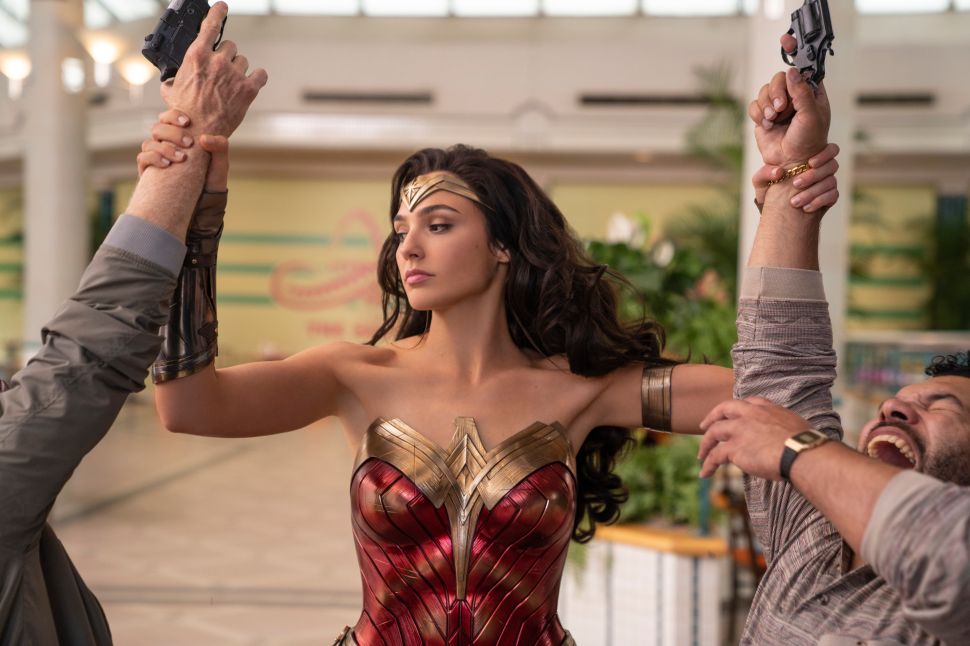