When Hollywood superstars Angelina Jolie and Brad Pitt announced their divorce in 2016, jaws dropped all over the world as curious spectators contemplated the inevitable division of assets: which luminary would claim which villa, and what would happen to the famous couple’s considerable art collection? According to a new report, next month, Angelina Jolie is angling to auction off a canvas in her possession that was painted by Winston Churchill; this sale is set to take place via Christie’s Auction House in London. According to the Associated Press, the painting is entitled Tower of the Koutoubia Mosque, and it’s expected to sell for between $2.1 million to $3.4 million.

According to Christie’s, this painting is the sole work created by Churchill during the Second World War, and it was completed after the conclusion of the Casablanca Conference in January 1943. Churchill evidently decided to capture the scene of Tower of the Koutoubia Mosque in a painting after observing that the view particularly impressed Franklin D. Roosevelt, whom Churchill had invited to accompany him on an excursion in Marrakech. Subsequently, Churchill gifted the painting to FDR, and it served as a stalwart reminder of the bond between the United States and the U.K.

“Tower of the Koutoubia Mosque is….arguably the best painting by Winston Churchill due to the significance of the subject matter to him, and the fact that it highlights the importance of the friendship between the two leaders,” Nick Orchard, the Head of the Modern British Art Department at Christie’s, said in a statement. “The gifting of the work to Roosevelt underlines the fact that Churchill held the American President in such high regard and points to their joint efforts in guiding the Allied powers to the outcome of the Second World War.”

After FDR’s death in 1945, the painting was reportedly sold by his son and went on to change hands many times. Pitt and Jolie purchased Tower of the Koutoubia Mosque in 2011, and for a time, the painting was simply one of their many accumulated treasures: they’ve purchased work by Banksy in the past, and Pitt is known to be a passionate collector of Art Deco furniture. Now, however, it appears that the Churchill painting is being unloaded along with many of the other things the couple shared. But don’t worry about the former power couple: to heal from the split, Brad has reportedly taken up sculpting. Who needs a shared art collection when you can make art yourself? 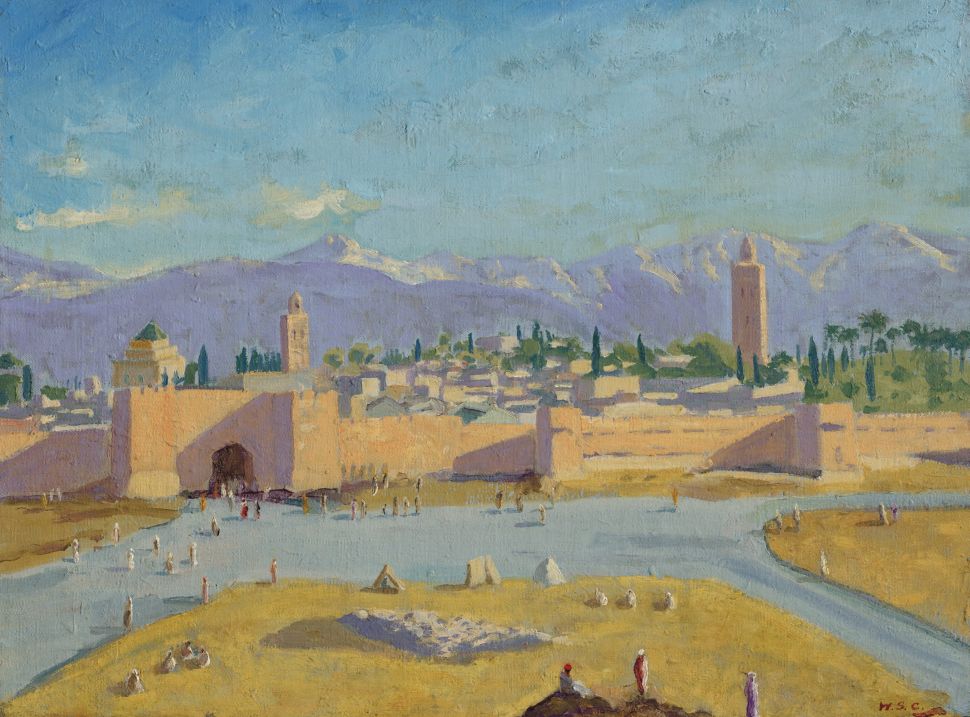