Artist Dominic Chambers’ Blue Sugar baby (Moses in Blue), part of his Primary Magic series, depicts a Black woman reading a book on the couch — her head supported slightly by her propped-up arm, as she gazes at the text in front of her. Hues of blue wash the subject and her abstracted landscape. Red, green, and yellow tones adorn the painting throughout. Much like the rest of Chambers’ current work, Blue Sugar baby (Moses in Blue), exists at the intersection between imagination and reality, as the 27-year-old artist uses his work to explore the relationship between leisure and Black intellectualism.

Although Chambers has always had an aptitude for reading and contemplation, he didn’t grow up thinking he could be an intellectual. Originally from St. Louis, Missouri, Chambers was raised in a poor, single-mother household. When he was young, no one could watch him outside of school, but Deanna, the youngest of his six sisters. Deanna, an avid reader herself, would take them to the library regularly, sometimes even as early as 6 a.m. During periods of Chambers’ life when he and his family were houseless, they would sleep in parks across from the St. Louis Public Library, where he would often go to read before the shelter opened.

However, when it came to school, Chambers was largely ambivalent. “I loved drawing, reading, and painting, but I just wasn’t enthusiastic about the educational system,” Chambers told Observer, “In school, we weren’t reading Toni Morrison. We weren’t reading James Baldwin. We were taking classes about the greatness of white people.” In 2011, Chambers graduated high school, but college was not a serious consideration. If his high school girlfriend hadn’t threatened to break up with him if he didn’t apply, he wouldn’t have ended up at Florissant Valley Community College in Ferguson, Missouri.

There, he learned that another artist in his program named Aaron Fowler found his way to Yale University through a fellowship for artists called the Yale Norfolk summer residency program. At the time, Chambers didn’t know there was a space for artists at a place like Yale. As someone with a naturally competitive and determined nature, Chambers set his sights on getting into the program and his sophomore year, he transferred to the Milwaukee Institute of Art and Design. He was accepted into the Norfolk program in 2015, and with the residency under his belt, took the next step of applying to the Yale School of Art for graduate school. “I thought, my genius has been realized!” Chambers says. “This is all going to happen.” But he was rejected.

If he wanted a shot at getting into Yale the next year, Chambers knew he had less than a year to reinvent his portfolio and beef up his CV. Chambers rented a studio apartment in Milwaukee and became a member of the Plum Blossom Initiative, a program that one of his instructors started that aimed to give artists a leg up in professional development. During this time, he created his Apple Spirits collection, a series of drawings that show spirits looming over the heads of Black bodies, as a way to challenge the dichotomy between Black masculinity and vulnerability. “As a Black male growing up in an impoverished neighborhood, you aren’t taught to embrace your imagination like you are taught to become strong and endure the world,” Chambers says. “Because the world we’re a part of has very real consequences.”

In 2017, Chambers was accepted into Yale University School of Art, and in 2019, he graduated with an M.F.A. While Chambers learned how to create in a much more structured way at Yale, he says the work he produced during his time there wasn’t very good. It wasn’t until post-grad that he created his three main bodies of work: Wash Paintings, Primary Magic, and After Albers. While color themes vary between these bodies, all three depict Black people in moments of leisure and contemplation in an abstract space. He describes this space between reality and imagination as magical realism. Juxtaposed with subjects reading or in contemplation, there are surreal aspects to the paintings, whether it be extremities among colors, or an exaggeration of elements that may not belong.

“When I think about magical realism, I think about books and how they are a tool to improve or enhance your imagination,” Chambers says. “You can only create these spaces between reality and imagination if you’re stimulated through an intellectual tool such as reading.” Chambers also places his subjects in imaginary landscapes, because urban environments are where one usually expects to see Black bodies with some form of trauma inflicted upon them.

However, rooted in Chambers’ use of magical realism is his aim to challenge the idea of perception. “We don’t always understand what it is that we’re looking at, and our experiences may not always be as clear as we think they are,” Chambers says. By painting Black people reading and in moments of leisure, Chambers wants to change the perception that Blackness and intellectualism cannot coexist.

“Historically speaking, Black people weren’t seen as being those who contributed to the intellectual landscape,” Chambers says. “We were not allowed to become educated, because the consequences of doing such could be death. But right now, the contribution of Black intellectuals seems to be quite significant. Black voices are being heard in a way that they haven’t necessarily been heard before, and what I want to do with this work is have a conversation about that.”

Chambers’ most recent works and his formative Apple Spirit drawings are not dissimilar to each other — in both subjects are transported into an imaginary space, showcasing the idea that everything requires more than a singular look. Without taking time to process and think, what we assume is true is often just reactionary. Chambers says color, too, is about perception. His attraction to the late German-born artist Joseph Albers, who he largely drew inspiration from in his After Albers collection, comes from Albers’ refusal to accept colors as they are. “You could show Albers a green and ask him, is this green?” Chambers explains. “And he will say to you, well, it depends. He understands that it’s green in your head, but it could be something else relative to something that is another color.”

Although Chambers’ subjects engage in slowing down and catching up with one’s self, the artist struggles with striking a balance between being lazy and hyper-productive. However, for Chambers, productivity just means showing up — arriving at the studio, being present, and using the time to either make art, watch a movie, read a book, or listen to albums. Chambers says his incessant need to be productive doesn’t bother him. How he utilizes that productivity is what matters most. “I think my responsibility is to create images of my community members at rest, and as people who are capable of engaging with literary tools and escapism,” Chambers says.

Chambers has a solo show coming up in September at the Luce Gallery in Turin, Italy, but he says his current focus is just falling back in love with his art. This past year, Chambers was also featured on Forbes’ 30 Under 30 list for being one of the most promising young artists of this generation. Since then, Chambers says that many people’s perceptions of him have changed. “Once you’re attached to a certain kind of name, there’s this kind of assumption about the quality of artist that you are,” Chambers says. “Navigating that has been really new to me, because I still feel like Dominic. I still make mistakes, and I still work hard. I think that I want to make sure everyone else understands that too, you know?” 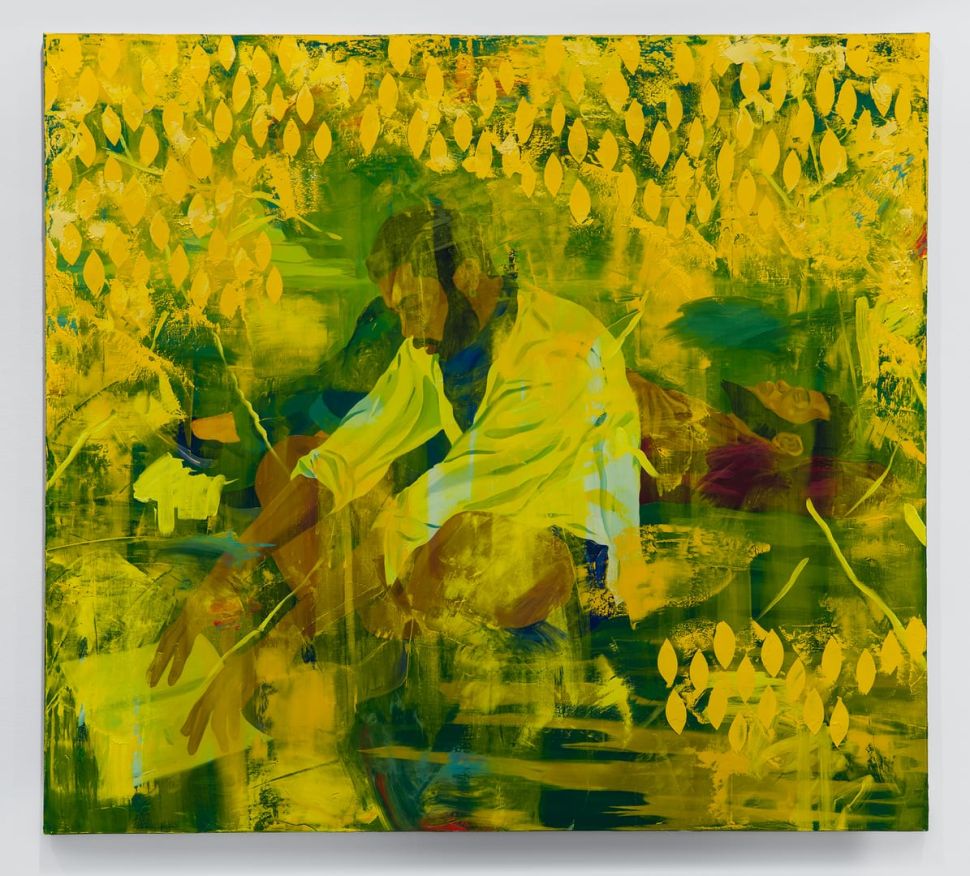