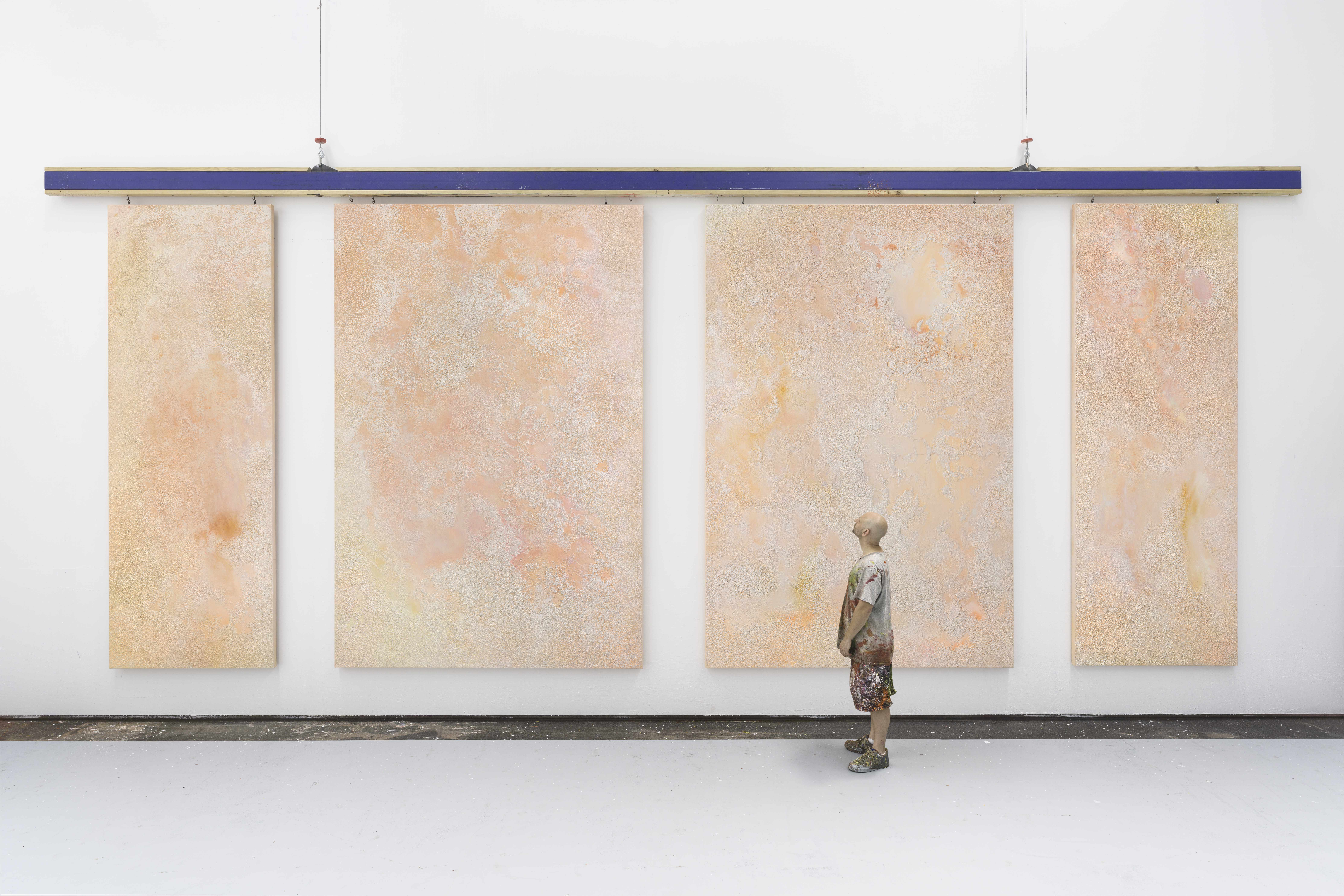 Ash Keating’s soon to open show, Duality, comprises two bodies of work showing concurrently at Linden New Art in Melbourne, Australia. Duality opens on the 13th of February showing Aerial before changing to Fall on Sunday the 28th of March to the 16th of May.

Ash Keating applies paint with a fire extinguisher, fusing industrial glass beads more commonly used for road signage into his large-scale works. Alone in his Melbourne-based suburban studio, with vast ceilings 8 meters high to accommodate his oversized canvases, Keating is in his element. The Melbourne artist, who graduated with a Bachelor of Fine Art (BFA) in Painting from Monash University in 2003, and BFA Honors from the Victorian College of the Arts in 2006, has rarely made use of a paintbrush.

Since 2004, his outdoor murals and large-scale canvas works have appeared nationally and internationally, whether outdoor site-specific works or in galleries including National Gallery of Australia (NGA), National Gallery of Victoria (NGV), Latrobe University of Modern Art, Art Gallery of Ballarat, and Museum of Contemporary Art’s C3West (MCA). His work has been exhibited internationally at Museo de Arte Contemporaneo, Santiago, Chile, Seoul Art Space and Artsonje Centre, Seoul, South Korea, and the 6th SCAPE Biennial 2010–11, and Christchurch Art Gallery, New Zealand. Keating has been commissioned to produce public works for the National Gallery of Victoria, Melbourne, the Adelaide Festival Centre and Sydney’s Domain. His works are held in collections including the NGV, NGA, MCA, Australian Gallery of NSW, Monash University of Modern Art and Artbank. 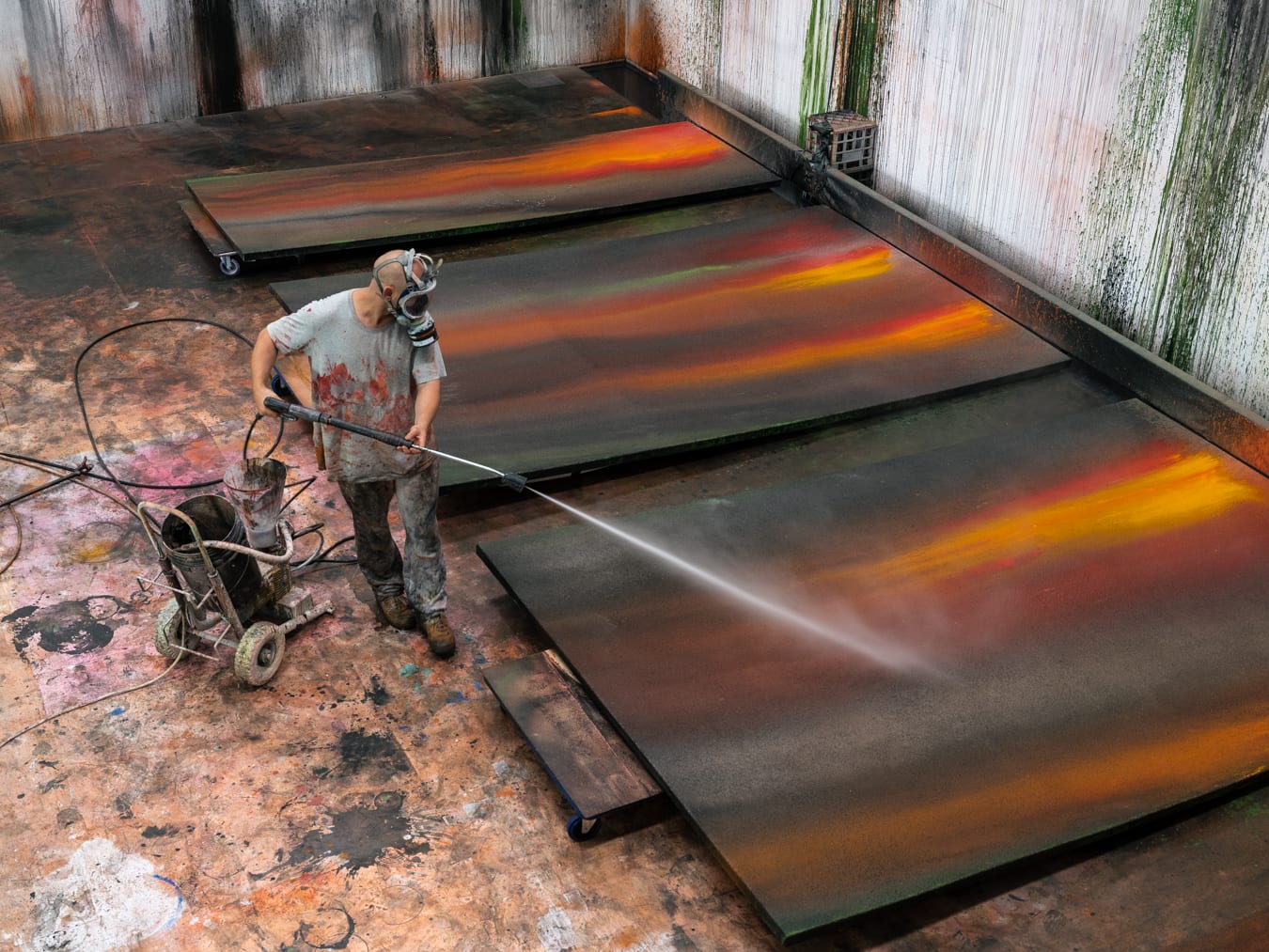 Keating’s latest exhibition was a year in the making. Duality, comprising two separate bodies of work that will show concurrently, marks an evolution in his techniques, his mindset and his experimental ambitions.

When news of the coronavirus worsened from February 2020, and the international wave of cases became an undeniable devastation, Melbourne closed its public institutions and introduced the first lockdown soon after. Artists across all genres could only accept, in shock and dismay, their plans and livelihoods being curtailed. Keating saw many of his contemporaries turning their focus to online exhibitions, selling work via social media or creating screen-suitable images and videos to both keep their audiences interested and to stay busy in a time of immense uncertainty.

“The pandemic in 2020 saw a rise in consuming art via the screen, and whilst I am very content with a lot of the flat surface paintings I have made in the past few years, I wanted to reward the gallery visitor when the new works were eventually put on show,” Keating explains of the highly-textured, dimensional artworks he’s created for Duality.

“I wanted to make unique textured paintings that were almost sculptural, the very opposite of looking at a painting on a phone or digital screen.”

Keating has become known for his industrial toolkit. His large-scale outdoor murals, in particular, have enabled him to perform for onlookers either in person, or via the filmed version. Wielding the paint-filled fire extinguisher and applying sweeping sprays of multi-hued paint to create immense works that reflect on mood, light and atmosphere, Keating was known both for his stunning creations and also for his muscular, athletic feats of production. For Duality, he has used a range of industrial tools and materials to apply product to canvases that stand 4 meters high. The process has been much more cerebral and subdued than his previous performance works. When we first speak, they are due to be installed in an old Victorian mansion, Linden New Art in Melbourne within days. He has explored landscapes both seen and imagined, reflective of Australian light and textures.

“As I began to make the first series of new works for Linden in September and October, I let the material and the energy in making the work take on a life of its own,” Keating recalls. “The perlite, mica flakes and acrylic layers were applied with a lawn seed spreader on the canvas. As I built up the layers in the cold winter weather, a dry crust formed yet I knew the layers underneath were still soft.”

That first series is entitled Aerial.

Keating used a leaf blower, the variety more commonly used by landscape gardeners, to begin the process of eroding the textured surface, further distressing the layers of paint with a box cutter. As brutal as the process was, the results are beautiful, and organic. Just as land is eroded by , wind and ice over thousands of years to create valleys, mountains and coastlines, Keating has merely turned his canvas into artistic terrain. 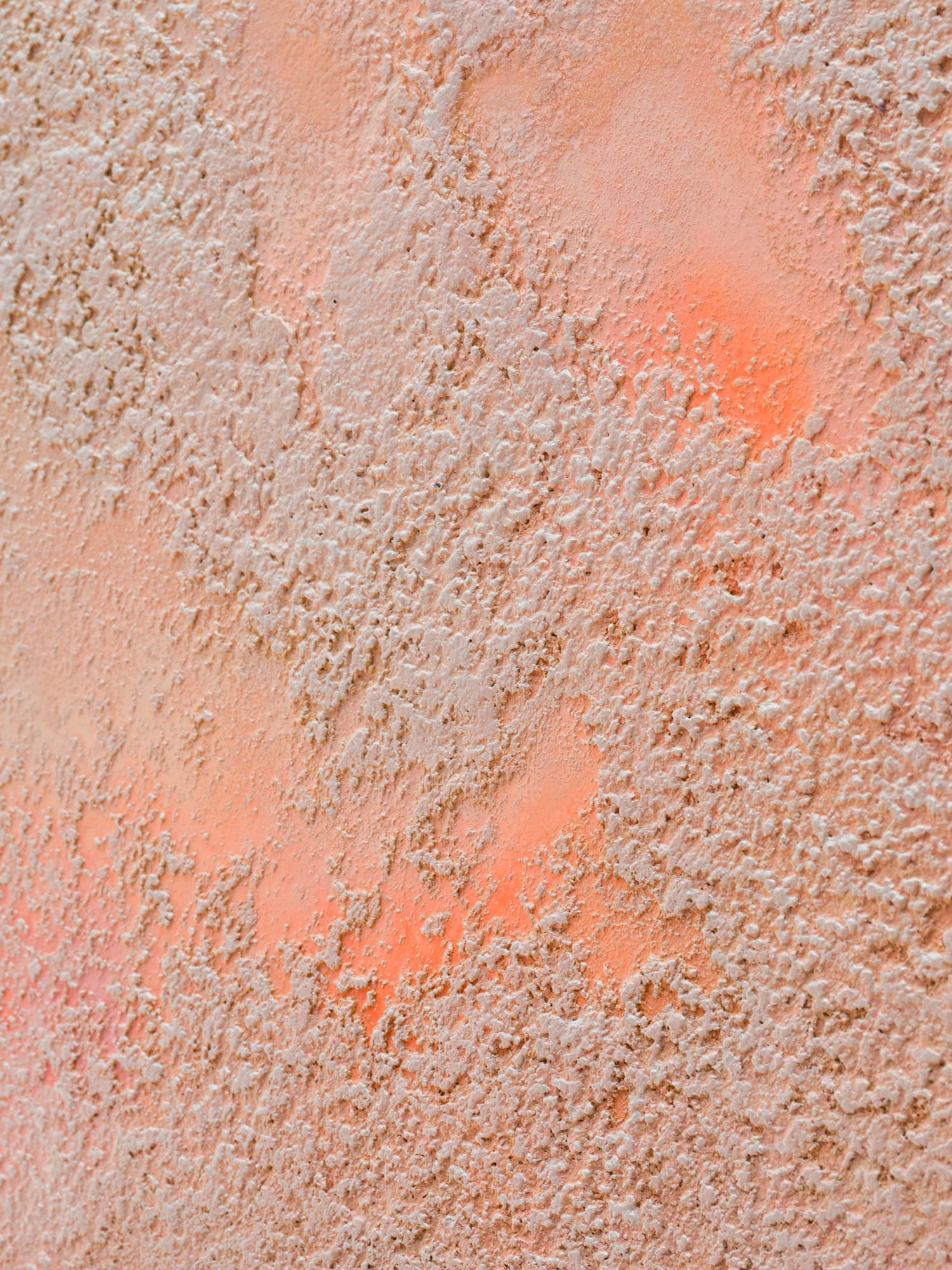 This is where the concept of Duality comes into play. As the first lockdown eased briefly before a second lockdown (“lockdown 2.0” for Melbourne residents) was instated, Keating was inspired to think about the nature of seasons, inevitable change, and the contrasting dynamics of human force upon nature versus organic erosion and rebirth.

Keating had a very personal reason to be thinking about life cycles. His grandmother – one of Australia’s pioneering women pilots, Elva Rush, 88 years old, was diagnosed with late stage pancreatic cancer.

Keating had feared, during the making of the second body of work, that Rush may not live to see the exhibition. When Keating spoke to Observer, in early February, the news was positive.

“Three weeks ago, my grandmother went into hospital in Geelong around the time of my 40th birthday. Somehow, she fought through and she’s good. I don’t know how she pushed through,” Keating says carefully. “She may have an extra few months since the cancer is spreading slowly.”

The composition of Aerial reminded Keating of the aerial landscapes in north west Victoria. “Creating those works took me back to the many times I flew aircraft alongside my pilot grandmother, Elva, over 20 years ago. It was [during] these flights that I began taking photos out of the plane window, which informed my very first paintings on canvas at 17 years of age, channelling the great Fred Williams and applying textured layers with oil paint straight out of the tube.”

Keating used paintbrushes for the first time when creating Aerial. “I’m thinking about colour and composition. When I’m combining fluorescent oranges and yellows, they’re knocked back with a lot of white so that there’s a bright spectrum, but they’re not in your face. I used brushes to paint iridescent silver over the surface, giving the impression of a salty sort of composition. I like the lightness and the softness that it brings to that warm palette. For me, they evoke dry, salt lakes but the few people who have visited the studio remarked that they look like images of Mars.” 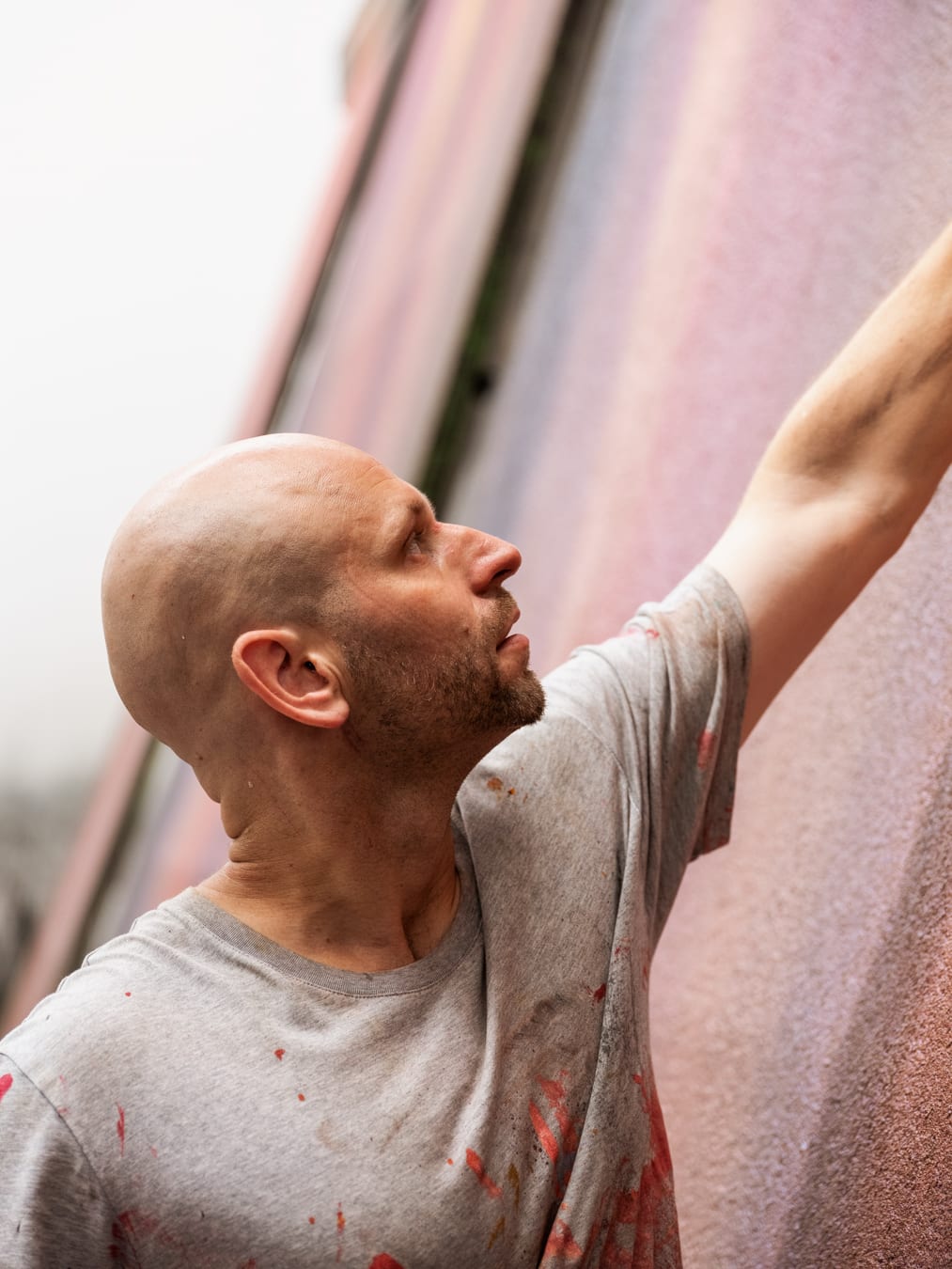 The concept of Fall took seed in Keating’s mind during the second lockdown in July 2020.

“I started thinking, why show one body of work when I’ve got three months in a gallery when I could make another – the same size – and swap it over halfway through? I used different materials but similar processes with each body of work. They’re linked, but polar opposite in palette, where the texture is raised in one, while the other is eroded,” Keating describes. “For me, the process when I make work is about the natural laws of physics and how material and form naturally through gravity, mimicking the way that landscapes evolved. [My work is] an imagined landscape, informed by my experience. I’ve flown over a lot of landscape, so my work is informed by memory and interpretation.”

Whereas Aerial was largely formed through building layers of paint on canvas then willfully damaging the surface with industrial tools, Keating made very deliberate human marks in Fall.

“I visited New York in 2019 and saw exhibitions by Jack Whitten and Mary Corse,” explains Keating. “Whitten’s works were very embossed, acrylic, sculptural paintings and Mary Corse’s work is basically minimal white work with reflective road-sign beads over top. I really wanted to explore these kind of textures in my own practice. The Fall canvases were dark bronze, almost like tree bark paintings until I flung dobs of orange, green and yellow paint mixed with glass beads over the top. I wanted to evoke the sensation of being amongst leaves dropping, autumnal change. I wanted it to feel like being immersed in a wet forest after rain.”

The 4 meter high paintings are almost floor to ceiling in Linden’s indoor space. They hang back-to-back in the middle of the space itself, ensuring they are central but not imposing – because the works are subtle and experiential. There’s a beautiful contrast in the scale of the contemporary works within an old, Victorian mansion in Melbourne’s beachside suburb of St Kilda. 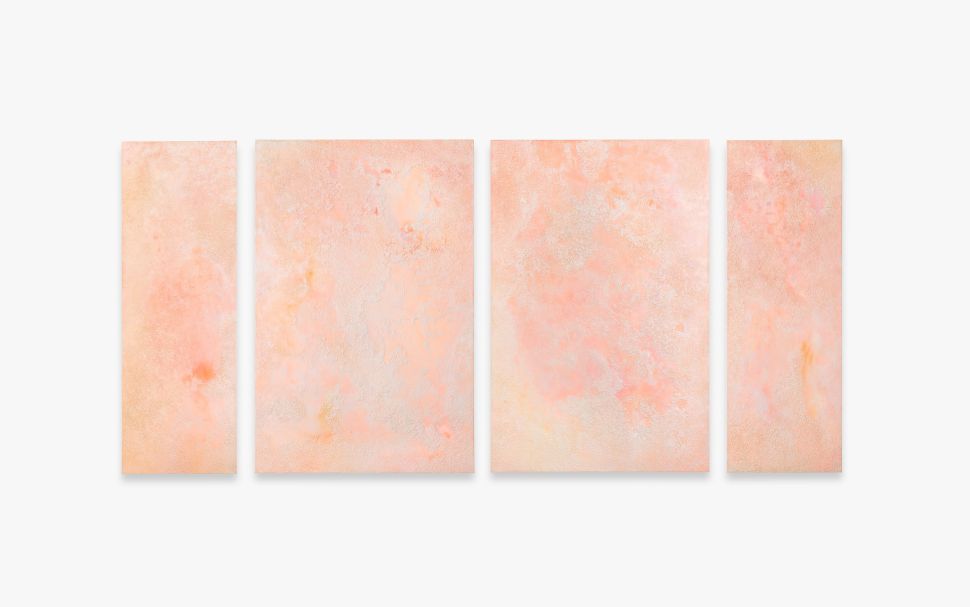