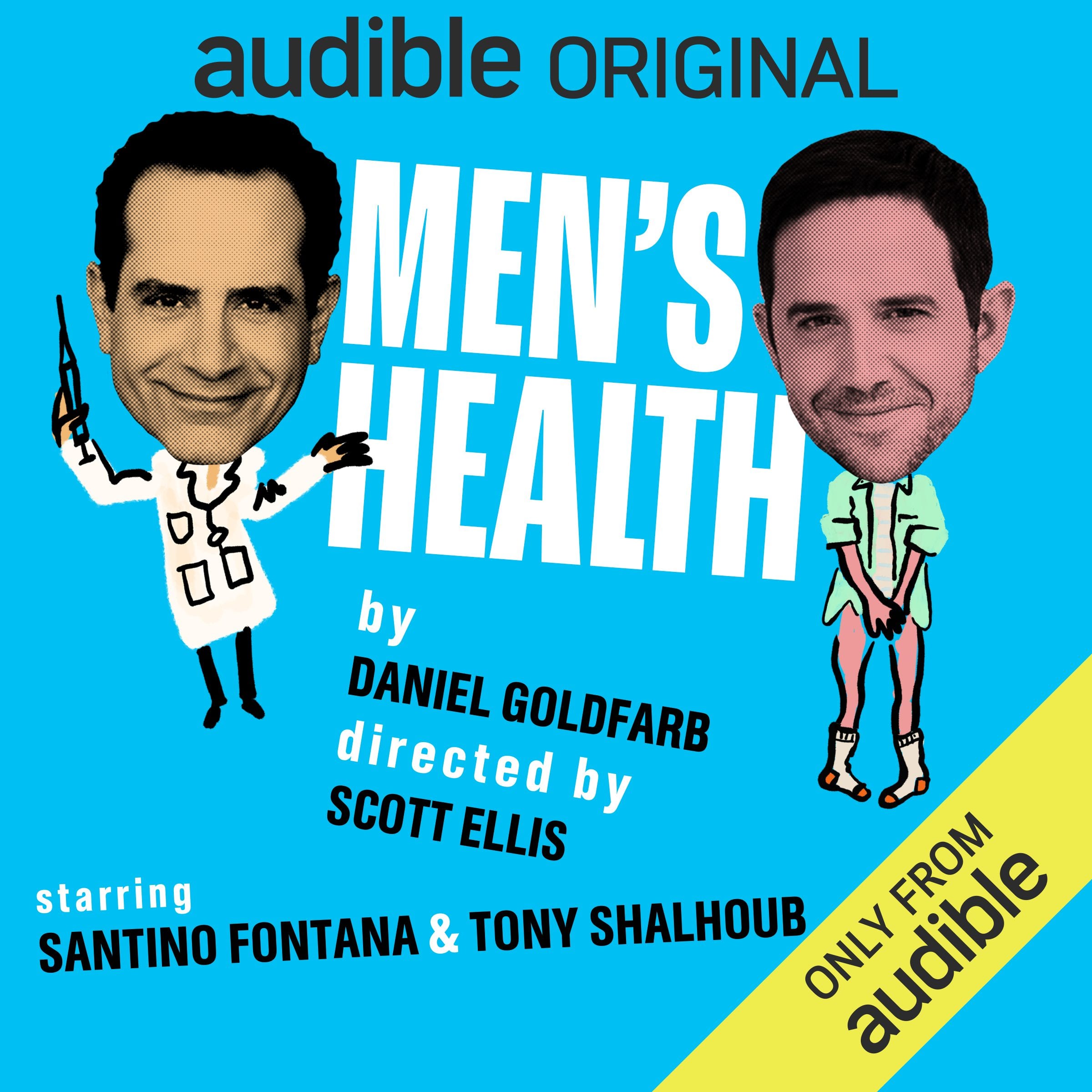 Of all the bleeding-edge F/X available to storytellers, nothing beats the mind’s eye. In audio, you can harness the listener’s imagination to reveal epic vistas or impossible creatures. If you’re Orson Welles, you can convince millions that Martians landed in New Jersey. Or, in the case of Daniel Goldfarb’s Men’s Health, now available at Audible, you practically see a penis slathered in numbing cream before the hypodermic needle slides in.

Sorry if that pinched a bit. Goldfarb’s medical dramedy is focused tightly on its protagonist’s vexed groin: painful bumps have materialized inside the shaft of TV writer Adam Joseph (Santino Fontana). Adam books an appointment at Weill-Cornell with sexual urologist Dr. Szabo (Tony Shalhoub), who treats the scribe over the course of a year with a series of injections, a taxing regimen of masturbation, and plenty of jolly, passive-aggressive banter. Szabo’s diagnosis: Peyronie’s Disease, fibrous scar tissue that develops on the penis and causes curved, painful erections. Yes, it’s a real thing I just Googled so you don’t have to.

If you’re allergic to the quirky doctor trope or prolonged hospital scenes, Men’s Health may not be for you. However, Goldfarb has a knack for tight, witty dialogue that never stints the emotional stakes of his wounded, struggling characters. (He’s a writer-producer for Amazon’s The Marvelous Mrs. Maisel, on which, not coincidentally, Shalhoub appears.) Adam is a smart, middle-aged Jew with the neuroses and sardonic defenses you’d expect. Szabo is more exotic fruit, a Hungarian immigrant with a love-hate relationship to his mother, a special-needs son, a “frigid” wife, and a near-raunchy obsession with men’s bodies. That comes with Szabo’s field, of course, but it also evokes how much he misses his father, left in the old country.

Unfolding in 90 minutes of hospital visits, Men’s Health is sort of Pygmalion with its pants off. Instead of an English dialectician teaching a Cockney girl to be a lady, you have a Hungarian doctor cocksculpting (I have no other word) a depressed, insecure artist, husband, and father.

Like any self-disrespecting hack, Adam feels his gifts are being squandered in TV; he longs to rediscover the literary promise of his youth. Szabo encourages Adam to free himself from writers rooms, and even offers to commission an unspecified work of art. Adam declines, but his intense weekly encounters with Szabo—porn, erections, injections, melancholy memories—ferment in his imagination. he dramatic tension lies in whether Szabo can smooth and straighten out Adam’s dong before their relationship becomes too fraught. (And by “fraught,” I mean after Szabo assists in manual stimulation.)

For a script crammed with zingers about penis pumps, pubic hair, Cialis, and other phallic miscellanea, the tale is refreshingly wholesome, treating Adam’s distress with compassion. Fontana, with his warm tones and innate likability, carries the emotional burden as Adam evolves from humiliation and fear to self-acceptance and creative fulfillment. And from the Dept of Embarrassing Riches, we have a lovely supporting cast: Laura Benanti (on phone) as Adam’s wryly supportive wife, Diane Guerrero as chipper nurse Carmen, and British acting jewel Tom Hollander providing tactful but amused narration.

And as the dick doc — by turns imperious, goofy, nurturing, sadistic – Tony Shalhoub adds yet another trophy role to his hall of obsessive kooks and overbearing martinets. Shalhoub is the master player of men who live by rules and care too deeply; he’s everyone’s favorite disappointed dad. Only Shalhoub, voice fluting, rasping and quicksilver, could pull off exit lines such as: “Vasectomy awaits. Between you and me, I love playing with fire. It’s like making crème brûlée. Remember, I need you ejaculating at least five times a week!”

Jauntily directed by Scott Ellis with superb audio design by John Gromada, Men’s Health is an exemplary use of the medium, painting in sound what we’d rather not see up close (some bits are best savored legs crossed). Hospital beeps and chatter seep through the door; lidocaine cream squirts coldly into latex palms; sterilized needles clatter from plastic packaging.

Even though I find audio theater more engaging and less dulling than Zoom theater, it can be tiring to absorb. At Playing on Air, they generally limit episodes to half an hour or less. Men’s Health is the length of an intermission-free show you’d see at Playwrights Horizons. Goldfarb is a canny, resourceful dramatist, but that’s an attention-span adjustment. Still, tune in for the dick jokes and utterly winning performances. In the coming weeks Audible Theater will release two more recordings: The Sound Inside and Brutal Imagination. Unlike Men’s Health, which was written to be heard, the others were previously produced on stage. I expect the translation to preserve the verbal dynamic of scripted drama with the mesmeric spell of well-engineered audio. Either way, I’ll be listening: the headphones are the thing. 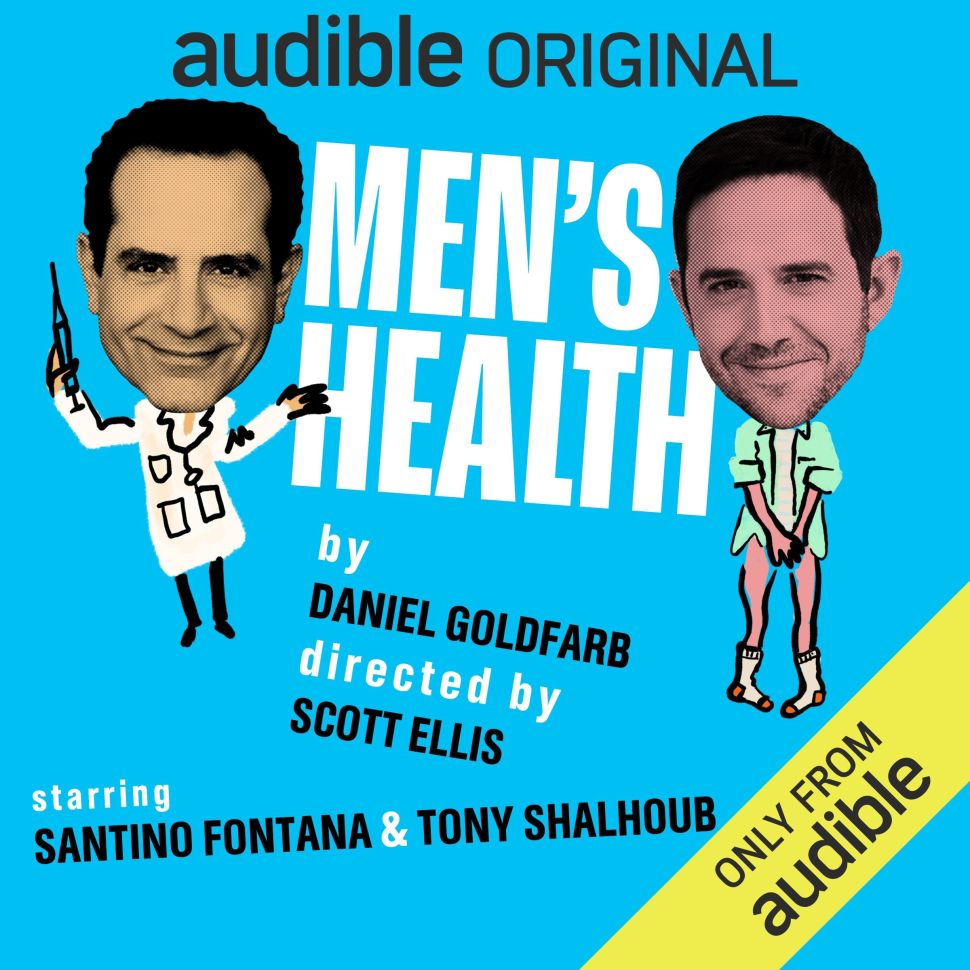