Rom-com fans are inveterate rewatchers, and that means the canon of Harrys, Sallys, Pretty Women, and Love Actuallys get rerun and re-listed with predictably passionate sentiment. Meanwhile, there are a lot of rom-coms that never get the affection of the chosen few though. Sometimes these are movies didn’t get big because, unlike most of the warhorses, they don’t feature white heterosexual stars. Some are just a little odd, or simply weren’t in the right place at the right time. For this Valentine’s Day, here are 10 rom-coms that deserve more love.

One of Billy Wilder’s least known films, in part because critics were horrified at its sexual content. And no wonder; even today, a rom-com which recommends judicious wife swapping as the key to a happy marriage has the power to shock. Orville Spooner (Ray Walston) is an aspiring small-town songwriter in Climax, Nevada, desperately afraid that his stunning younger wife Zelda (Felicia Farr) will leave him. When Dino (Dean Martin as himself) stops in town, Orville’s partner (Cliff Osmond) hatches a plot to replace Zelda with town sex worker Polly the Pistol (Kim Novak) for the night. The idea is that she’ll sleep with Dino and he’ll be grateful to Orville, take a song, and make them a fortune. Polly, though, loathes Dino and dreams of being with a good family man like Orville. Zelda, for her part, has had a crush on Dino since she was a kid. In a series of stunningly worldly twists that live up to the town’s name, everyone gets their carnal and other desires satisfied, and the bonds of matrimony are all the stronger for it. The soundtrack by the Gershwin brothers is as sophisticated, loopy and unforgettable as the rest of the film. Rent Kiss Me, Stupid on Amazon.

Jamie Babbit’s directorial debut about love blossoming in a gay conversion youth retreat is a marvel of uber-camp. Strict garishly attired administrator Mary (Cathy Moriarty) dresses the girls in pink while trying to align their gender by having them vacuum and scrub floors. Boys are dressed in blue and set to play football and fix cars. The flamboyant effort at heterosexing is just the backdrop for titular cheerleader Megan Bloomfield (a very young Natasha Lyonne) and Graham Eaton (Clea Duvall) to find their true selves, and true loves underneath the frilly bridesmaids dresses and rabidly smiling homophobic propaganda. Many reviewers found the film too broad at the time, but its fans know that there’s nothing wrong with declaring who you are with enthusiasm and pompoms. Watch But I’m a Cheerleader for free on YouTube.

The “Big Eden” of the title is Montana, where New York artist Henry (Arye Gross) returns when his grandfather suffers a stroke. More than that, it refers to a fantasy Montana, stripped of every vestige of homophobia, so that granddad, and the nice people in the local store, and the divorced most popular guy in school, are all rooting for Henry to find his true love. At first it seems like that love might be the popular guy (Tim DeKay), for whom Henry has carried a torch for 20 years, and who loves Henry so much he tries to be gay too. But eventually the movie turns gently to the shy, tall Native American store proprietor, Pike (Eric Schweig). Pike teaches himself to cook for the hapless-in-the-kitchen Henry and his recovering granddad even though he’s too reticent to declare himself. “I just want things to be nice for him,” he says. That’s the ethos of the movie, which imagines a community of caring in which all love is treasured. There aren’t a lot of belly laughs in this one, but keep the tissues close at hand. Watch Big Eden for free on Tubi.

Alice Wu’s brilliant rom-com about love and shame has grown in reputation over the years, but it still doesn’t really get its due. Wil (Michelle Krusiec) is a brilliant young surgeon whose widowed mother (Joan Chen) is willfully refusing to acknowledge she’s gay. But Ma is concealing a love herself, and becomes pregnant. Her own parents kick her out when she refuses to say who the father is, so she moves in with Wil, complicating her daughter’s new romance with ballet dancer Vivian (Lynn Chen.) Krusiec as Wil is quietly dazzling; all hard edges, stubborn resilience and fear of her own passion, as she and her mother first exasperate and then inspire each other. Wu also directed the 2020 queer Cyrano de Bergerac riff, The Half of It, and you should watch that too. Watch Saving Face for free on Tubi.

The rare rom-com where there’s actually some suspense as to how they’re going to end it. That seems to have upset some critics (it’s only got a 35% fresh on rotten tomatoes.) But it gives the sharply witty script a depth of melancholy that’s unusual in the genre. Rachel (Piper Perabo) marries her dream guy Heck (Matthew Goode) at the beginning of the film rather than the end…but during the wedding she catches the eye of their flower arranger Luce (Lena Headley). Perabo makes Rachel’s confusion and yearning palpable, while Headley’s Luce knows exactly what she wants, and why she can’t have it. But what really makes the movie something special is Goode’s performance as Heck, a sweet man, very much in love with his wife, who doesn’t understand why his marriage is falling out from under him. The movie also has one of the great meet cutes of all time: Rachel loses her wedding ring in the punch bowl, and Luce has to reach in and grab it for her. It’s adorable, a bit gross, and dripping with foreshadowing. Rent Imagine Me & You on YouTube.

Hugh Grant has been in a lot of rom-coms, but this is the best—yes, even better than Four Weddings and a Funeral. Drew Barrymore is one of the few female leads that has been able to match Grant quip for quip and charm for charm—his dry, laid-back ad libs and her frothy goofball riposte’s bounce off each other in a sublime harmony of silliness. The plot’s a bauble—he’s a washed-up ’80s songwriter, she’s his hired plant sitter who turns out to have a genius for song lyrics. But it provides an excuse for the fabulous and much-lamented composer Adam Schlesinger to create a series of brilliant pop song pastiches. The New Wave “Pop! Goes My Heart”, complete with music video set in a hospital, is hard to beat (thump thump), but I pledge my affection to “Way Back Into Love”—a tune so sugary it transports you into a diabetic coma of giggling rapture. “All I want to do is find a way back into love/I can’t make it through without a way back into love”—few couplets sum up the joy of rom-coms, or pop songs, so perfectly. Grant and Barrymore are both lovely singers, too. Rent Music and Lyrics on Amazon.

Martha (Anna Kendrick) starts out looking like a regular protagonist, unhappy in love. But then she falls for Francis (Sam Rockwell), a sweetly ditzy guy who turns out to be a superspy assassin, who now only kills people who hire him because killing is wrong. Martha’s horrified when she first learns that he wasn’t joking when he said he’d killed someone out behind the bar. But after she’s been shot at, kidnapped, and generally terrorized a time or three, she realizes that she too has an inner Tyrannosaurus Rex inside of her just waiting to come out and tear people into bloody shreds—while wearing cat ears, for some reason. Kendrick and Rockwell spiral down conversational rabbit holes with a starry-eyed blissfulness that sure sounds like large chunks were ad libbed (the rightfully disgraced Max Landis has the writer’s credit). A lot of rom-com couples are interchangeable, but Mr. Right manages to really make you believe its leads couldn’t have been happy with anyone else. Watch Mr. Right on Netflix.

The Incredible Jessica James doesn’t have any high concept or big reveal. Instead director James C. Strouse mostly sits back and gives Jessica Williams in the title role a chance to be witty, vulnerable, and stunningly charming. “Of course you [like me]. Everyone does. I’m freaking dope!” she exclaims, and she’s not wrong. Jessica the character is an aspiring playwright with a wall of rejection letters and heart recently broken by Damon (an extremely attractive LaKeith Stanfield). As you’d expect, she finds romance again—specifically with a fuddy-duddy divorced app designer named Boone (Chris O’Dowd). If there is a secret, quiet twist, it’s that the central relationship in the movie is not really between Boone and Jessica. It’s between Jessica and Shandra (Taliya Whitaker), a kid in Jessica’s class reminds her of her younger self. Teaching Shandra allows Jessica to embrace her own successes as well as her failures. The movie uses the rom-com as a way for Jessica to love her own freaking dopeness just as everyone else does. Watch The Incredible Jessica James on Netflix.

Victor Levin’s unlikely romance between two guests at a gauche destination wedding in Paso Robles was released to critical disdain and public indifference. It’s not hard to see why; successful rom-coms today tend to gush about the power of love and feature big public humiliating declarations. Destination Wedding’s protagonists, in contrast, are cynical, depressed, and speak to literally no one but each other. Keanu Reeves (!) as Frank and Wynona Ryder (!!) as Lindsay have perhaps the most spectacularly awkward mopey love-hate chemistry ever filmed. When Reeves lifts her in his arms, his crotchety resentment only makes the moment more romantic. Ryder for her part radiates self-disgust and resigned lust in the movie’s grotesquely adorable flailing sex scene in the high grass—“What the fuck, Frank!?” she says, rebuffing his advances right before throwing herself on him. If you want perfect romance, this will not be for you. But if you want a suitor who stumbles and curses inventively while failing to sweep you off your feet, this just might be love. Rent Destination Wedding on Amazon.

When its theatrical release was cancelled due to Covid, The Lovebirds got shuffled to Netflix and somewhat lost. That’s a shame, because it’s just the thing to take your mind off a particularly bleak year. Issa Rae (as Leilani) and Kumail Nanjiani (as Jibran) play a New Orleans couple watching their relationship disintegrate. But moments after they break up, they hit a bicyclist, and then are quickly swept up into an improbable series of villainous plots involving murder, blackmail, senators, kinky masks and sex cults. Of course, being faced with death makes them realize how much they rely on each other, but also doesn’t stop them from arguing incessantly at impossibly high velocities. Are orgies spontaneous or scheduled via Google Calendar? Is it worse to have hot bacon grease poured on your face or to be kicked by a horse? Rae and Nanjiani provide answers at sound-barrier breaking speed, as perhaps the best fast-talking comedy duos since Grant and Hepburn. Watch The Lovebirds on Netflix. 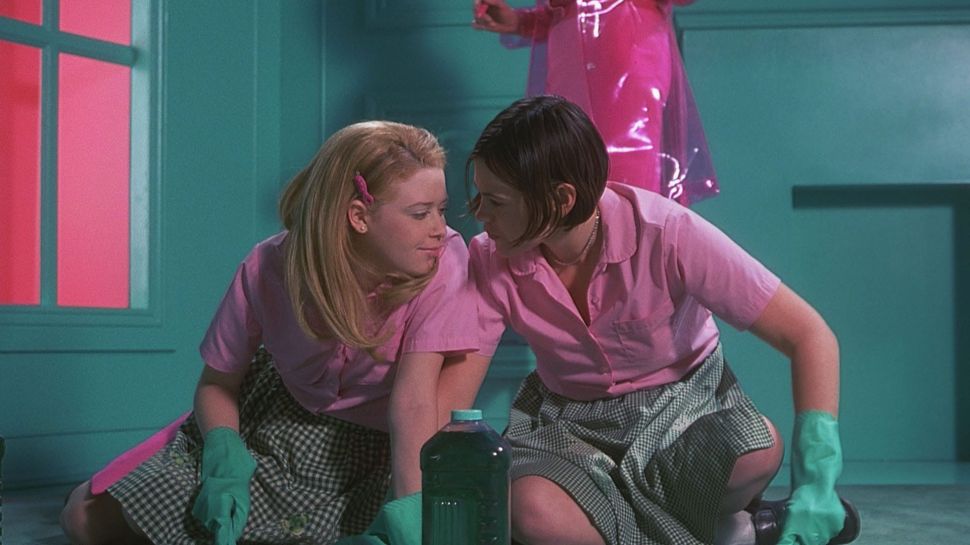