In the mid-’70s, when he was filming the swashbuckling adventure classic The Man Who Would Be King, Christopher Plummer received a piece of direction he would remember for the rest of his life. Plummer, portraying the writer Rudyard Kipling, was struggling with a certain line of dialogue, which he longed to infuse full of emotion. Take after take, he couldn’t get it right. Finally, as Plummer recalled in his 2008 memoir, the great director John Huston approached him and gently advised him, “Ah—ah—Chris, just take the music out of your voice.”

When I had the honor of profiling Plummer for Newsweek in 2018, he identified this wisdom as the greatest piece of direction he had ever received on a film. Indeed, Plummer, the legendary Canadian actor who died Friday at the age of 91, seemed to make a career out of taking the music out of his voice. Across a remarkable run that spanned 60-something years—from the Shakespearian heroes he portrayed onstage in the ’50s to unforgettable late-career roles in Spike Lee’s Inside Man or Mike Mills’ Beginners—Plummer delivered each role with understated grace and utterly magnetic charm. He embodied iconic newscasters (The Insider) and criminal psychopaths (The Silent Partner), aging Russian novelists (The Last Station) and dastardly oil tycoons (All the Money in the World), never straining or forcing the emotion, somehow always making it look improbably easy.

For years, Plummer resented the long shadow ‘The Sound of Music’ cast over his career, believing it to be dull, sentimental rubbish and cheekily calling it “The Sound of Mucus.”

Of course, that morsel of wisdom carried a double meaning for Plummer, since he had spent so much of his career running away from the music—The Sound of Music, more specifically, in which he’d so famously played Captain von Trapp, the strict patriarch whose military discipline is softened by the arrival of a free-spirited governess (Julie Andrews). For years, Plummer resented the long shadow the famous musical cast over his career, believing it to be dull, sentimental rubbish and cheekily calling it “The Sound of Mucus.” When I interviewed the man and brought up The Sound of Music, he groaned and said, “God, this whole fucking interview is going to be about The Sound of Music.” Then he laughed just amiably enough to put me at ease. “No, go ahead. It’s just… it lingers.” He added, “I couldn’t wait to be a character actor! So boring, being a leading actor, God.”

In his mid-career years, Plummer sometimes seemed drawn to villainous or conniving roles, perhaps in part to distance himself from the Oscar-winning children’s classic. There was 1978’s The Silent Partner, a heist film in which he memorably played a sadistic thief, and 1984’s underrated Dreamscape, in which he was a government agent exploiting a psychic in a surreal dreamworld. He also had a brief role in Spike Lee’s epic Malcolm X, as a racist prison minister.

But in real life, Plummer was a charmer. The man was a gentleman, a funny storyteller, and an extraordinary link between Hollywood’s distant past and present. I recall sitting in his living room in rural Connecticut, surrounded by eye-popping paintings of monkeys and birds (Plummer adored animals), and soaking in his lifetime of stories. (Yes, I know, this is bragging—forgive me.)

He’d had a flair for debauchery in his early career, the Broadway days, when he drank like a fish, even and especially when he was due onstage. “There used to be a rule,” he told me, “that you weren’t a man till you could go through a matinee of Hamlet pissed and hungover. Which we did! Then you were a man, my son.” But in the late 1960s, he met his third wife, the English actress Elaine Taylor, to whom he remained married until his death, on the set of Lock Up Your Daughters, and soon cut down on his drinking.

His streak of memorable roles in his 70s and 80s is unmatched in recent Hollywood history; no actor reinvented himself 50 years into his career the way Plummer did.

Plummer was born in 1929, which makes it all the more astonishing that he delivered some of his best, most unforgettable work in the 21st century, at an age when most actors ease into retirement. Arguably, Plummer’s late-career renaissance really kicked into motion just before Y2K, with Michael Mann’s 1999 corporate whistleblower masterpiece The Insider, in which he gave an extraordinary performance as the real-life newsman Mike Wallace. (As longtime Observer critic Rex Reed wrote at the time, Plummer “plays the veteran newscaster with chilling warts-and-all honesty, never once stooping to mimicry or impersonation.”) The Insider disappointed at the box office, but is now rightfully regarded as one of the best films of 1999.

In fact, Plummer refused to slow down. I’d argue that his streak of memorable roles in his 70s and 80s is unmatched in recent Hollywood history; no actor reinvented himself 50 years into his career the way Plummer did. He was even introduced to a younger generation of moviegoers thanks to National Treasure (in which he played Nicolas Cage’s grandfather) and Pixar’s touching Up (in which he lent his voice to the elderly Charles Muntz).

Then, at 87, he performed the impressive logistical feat of replacing the disgraced Kevin Spacey as J. Paul Getty in All the Money in the World after the movie had already been shot, reshooting the character’s scenes in just nine days so the film could be rushed into theaters one month later. Astoundingly, Plummer nailed the slimy role and received his third Oscar nomination for it. “It’s nice to be reborn every few decades,” Plummer mused to the New York Times a few months later, “because then you can have another career.”

Late in life, Plummer had a certain knack for portraying mischievous, endearing grandfatherly figures living it up in their golden years. (Of course, it helped that he remained fiercely handsome.) Most memorable was his sensitive, layered performance in 2010’s Beginners, in which he played a gay man who comes out to his son and begins a new relationship following the death of his wife. At 82, Plummer won his first Oscar for that performance; he clutched the prize during his acceptance speech and quipped, “You’re only two years older than me, darling. Where have you been all my life?”

And a little over a year or so ago, he played Harlan Thrombey, the fabulously wealthy mystery novelist at the center of Rian Johnson’s zig-zagging whodunit Knives Out. The film came out on the eve of Plummer’s 90th birthday, and it’s a testament to his magnetic charisma that he steals the show in a movie so stuffed with hammy performances.

Up until 2020, Plummer never slowed down, and he never planned to retire. In that 2018 profile, he joked that he wanted to drop dead onstage. The business kept him young, he said. He seemed disgusted at the mere prospect of retiring. “Can you imagine what it’s like to retire?” he said. “Some friends of mine [have retired] and they’re just absolutely ruined as people. They just… die. They fall apart. Go away. Awful.” It’s a shame the pandemic likely forced Plummer to step back from film roles in his final year.

Of course, anyone who’s delivered that many unforgettable performances, across genres and eras, has achieved cinematic immortality. So watch a Christopher Plummer movie tonight and raise a toast. And please, for God’s sake, not The Sound of Music. 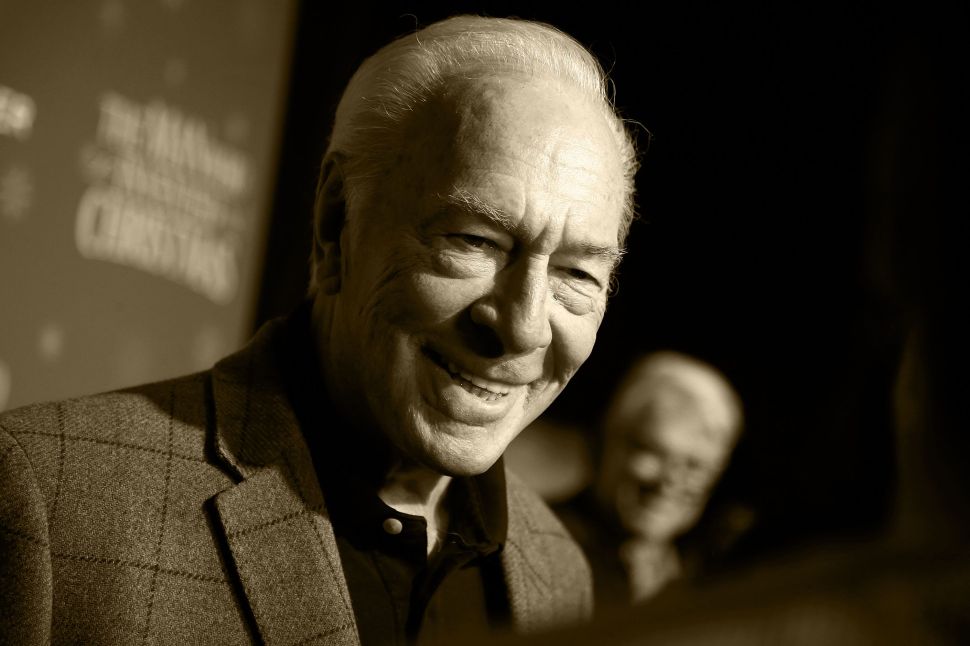 Filed Under: Movies, Entertainment, Christopher Plummer, Knives out, All the Money in the World, The Girl With The Dragon Tattoo, obituary, The Sound of Music, Beginners