An artist and a drone walk into a bar. The artist asks the bartender if she can leave her drone on the barstool, and if the bartender can mix a cocktail for the small aircraft, which is dressed in a yellow sweater. The bartender says yes. The artist sends a text before rushing out: “I’m the one wearing yellow, waiting at the bar.”

This happened in 2017, when artist Danielle Baskin was once again paying the bills off of something that began as a joke: drone sweaters. But, she took the bit yet another step further by making a Tinder profile for a drone, then arranging first dates. These suitors might have expected to meet the human behind the offbeat Tinder profile, but instead, they found a hunk of metal and propellers equipped with a Bluetooth microphone, so Baskin could talk to her drone’s dates without revealing herself.

“I actually convince places to let me do weird things by saying it’s my friend’s birthday,” Baskin says. “The logic is like, ‘Oh, I can be strange for someone’s birthday,’ but if I was like, ‘There’s a totally random person who’s coming in here who I’ve never met, and I want to do my theater piece with them,’ I think that’s hard to wrap their mind around.”

This scheme is emblematic of Baskin’s art practice. She envisions something surreal and dystopian, but pushes the idea to its extremity. And then, she pushes it just one absurd step farther and ends up having to navigate the logistics of finding a bartender who will serve a drone a drink.

Baskin is a San Francisco-based artist who runs several small businesses, which are also, essentially, art projects: Branded Fruit (print your company’s logo on locally-sourced produce); Physical Cloud Co. (“cloud storage,” but it’s a physical file folder that looks like a cloud); Founder Fitness Club (get a yoga mat printed with your start-up’s pitch deck to attract investors in downward dog); TouchBase (baseball cards, but for venture capitalists), and so many more.

Baskin’s most recent venture might seem familiar: Blue Check Homes went viral last month. On Twitter, she wrote, “You can now get a Verified Badge crest on your Bay Area home” and attached Photoshopped images of a blue check crest on a house. Some people got the joke – others erupted in an uproar about how this time, Silicon Valley culture has gone too far.

You can now get a Verified Badge crest on your Bay Area home if you're an influencer, public figure, or represent a brand. https://t.co/SyoURdSGe7 pic.twitter.com/H1Sz3gwBdL

On her website, people with verified accounts can apply for a crest, for which they would be charged $2,999.99 if approved. Over 650 people applied, although Baskin admits probably only 80 applicants seemed real.

It might appear as though Baskin is a Silicon Valley dropout poking fun at her old colleagues, but really, her background is in designing immersive theater experiences. Now, the internet is her stage.

Immersive theater allows viewers to physically become part of a show. It might take place in a set location, or in Baskin’s case, we might encounter these curated illusions in our daily lives, or on our Twitter feeds. At Odyssey Works, Baskin learned about these experimental performances by creating immersive experiences for one person at a time.

“Part of my job was actually planting things in their life before the performance that would give them hints as to what’s going to happen, but that they didn’t know was part of the performance,” Baskin explains. In 2013, she helped Odyssey Works design a three month-long immersive theater experience for author Rick Moody.

“I think that spending time designing these elaborate experiences for people with all the details seeming very real has totally affected how I approach making businesses and strange artwork,” she says.

If you think of internet pranks as immersive theater like Baskin does, the digital medium poses its own set of challenges and possibilities. These performances are not bound by time or physical place; so, something that begins as a joke – like branded produce as company swag – might turn into a real business with hired employees, taxes, legal fees, and all that corporate jazz. As a self-employed artist, it’s no small potatoes if AT&T wants to commission you to print their logo on a pineapple. Baskin may be participating in the capitalist hustle just as much as tech bros who own too many company hoodies, but it’s because she’s so ingrained in it that her capitalist critique is so effective, fresh, and joyous. She mocks the hero-worship of successful start-up founders, yet she’s still earning money and clout from these ideas.

Here’s where it gets tricky: how far do you push these digital performances? How far is too far?

“I try not to break character. It depends on whether or not I think the thing I’m doing is ethical,” Baskin told Observer. “Throughout my whole drone dating thing, or some other projects like my venture capitalist trading cards, I never said ‘Ha, this is a joke.’ I would make it seem like it’s totally normal.”

Given the hysteria and backlash against the thought of Bay Area influencers adorning their homes with blue checks, Baskin added a disclaimer at the bottom of the website, titled, “WTF is this real?” She writes, “It’s somewhere in between real and fake. Anyone can craft something out of plaster. Anyone can apply to be verified.”

For Baskin, there’s a fine line between absurdist humor and harm. For immersive theater to be done well, artists must think critically about the consent of their subjects. Even though she will soon conduct interviews with Blue Check Homes applicants, like a polo champion and a radiology influencer, she wants the experience to be enjoyable for everyone involved.

These questions about ethical, artistic value and financial gain are closely entwined – Baskin’s livelihood is dependent on her ability to come up with performances, or jokes, or businesses that achieve the precise suspension of disbelief that makes people stop and consider if what they’re looking at is real. She does hope to sculpt an actual Blue Check Homes crest as a novelty, but she won’t actually sell it for $2,999.99. This is what’s fascinating about Baskin’s work – some projects like Maskalike and Branded Fruit become lasting, profitable ventures. Other times, she will invest significant time into a project solely for the joy of the performance, and for the entertainment it provides others. As The Decruiter, for example, Baskin helps people determine if they “qualify” to quit their job. She provides free, one-hour consultations, but she limits these to one client every two weeks to avoid devoting too much unpaid labor to the experience.

Sometimes, she categorizes her art projects according to the Dungeons and Dragons alignment chart, which evaluates character on two axes: lawful to chaos, and evil to good. A project like Branded Fruit is chaotic good – sure, it’s dystopian to craft 1000 Salesforce-branded avocados, but ultimately, it’s a net-positive to produce biodegradable conference giveaways.

Blue Check Homes is chaotic neutral. The project has been entertaining to follow, and it has stirred up valuable conversation about class, equity, and not believing everything you see on Twitter. It’s an optical illusion for our social media feed: it’s so absurd, but it could very easily be real in a moment when people squabble over access to the invite-only app Clubhouse.

This is what is admirable about Baskin’s work: even when she’s trolling on Twitter or selling 24-square-foot cover letters, she makes the experience of stumbling into a performance piece joyful and thought-provoking, yet never invasive. 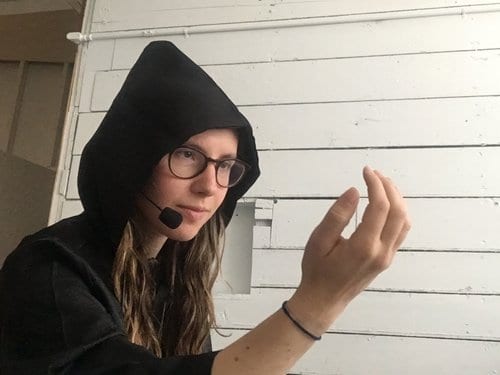