The werewolf movie is in dire need of a revamp. Sure, we’ve got a few great additions to the sub-genre in the recent past, like Dog Soldiers or Brotherhood of the Wolf, but those are few and far between. This is why it’s so exciting to see what Sean Ellis does with the lycanthropy mythology, and why it’s so frustrating to see his film The Cursed (originally titled Eight for Silver) stop short of greatness.

Writer-director Sean Ellis’ The Cursed, which premiered at Sundance this week, starts out promising enough, with an opening scene set in the gas-filled trenches of World War I during the Battle of the Somme where a Fresh soldier dies horribly, and the doctor pulls a strange silver bullet from the dying man’s chest. Then we jump back 35 years to a French countryside that’s being ravaged by a cholera pandemic — the first of several eerie yet accidental connections to our own, sadly werewolf-less world. Local odious landowner Seamus Laurent (Alistair Petrie) brutally massacres a Roma encampment with claims to his land, with the last victim cursing his entire family. The massacre is shot exquisitely on 35mm film. Presented in an unbroken ultra-wide shot from Seamus’ perspective, the massacre is detached, cold, horrific and enthralling. It’s an attention-grabber that announces a potentially strong player in the 2021 horror landscape, mostly thanks to a gruesome execution that will make you look at scarecrows in a whole new way.

Days later, the kids around the manor start getting strange nightmares about ghouls and scarecrows, and they get drawn to a ritual-etched set of silver teeth that may or may not be connected to the biblical 30 pieces of silver paid as a reward for betraying Jesus. Though the addition of the silver teeth and their biblical meaning are teased to have great importance, and Ellis’ script seems to briefly consider the idea of using the werewolf tale to reckon with colonization and the historical mistreatment of the Roma people in Europe, The Cursed throws that aside and relegates it to simple and tired window dressing. The original 1941 The Wolf Man was about the Jewish experience in Europe before World War II, and in an attempt to do something different and avoid copying that film, The Cursed ends up reinforcing tired tropes of Roma people as evil witches.

After one of Seamus’ kids go missing, and reports start coming in about wolf attacks, a pathologist and Van Helsing-type named John McBride (Boyd Holbrook) arrives to provide exposition and fight the not-really wolves. It is finally here that The Cursed becomes the blood-soaked, Hammer Horror-inspired monster mash it was always destined to be.

Where most werewolf movies have lifted most of their mythology and visuals from The Wolf Man, Sean Ellis’ greatest accomplishment is that he makes The Cursed feel like the first fresh new take on the subgenre in decades. These are not your furry lupines that howl at the moon every night, but horrific monsters that resemble the vampiric creatures of I Am Legend. There is no cool transformation like in An American Werewolf in London, but we do get a horrific autopsy that will give you Alien flashbacks in your nightmares, and enough body horror to satisfy fans of The Thing. The movie also chooses to focus not on the person afflicted by the wolf curse, but on how the rest of the community pays the price for the landowner’s sins — a choice the director seemingly took in order to explore the werewolf curse as an allegory for addiction, which sort of shows onscreen, but doesn’t really result in anything interesting being said. The problem is that we don’t really care about the characters, because, other than Holbrook’s werewolf hunter, there aren’t many to care about. It doesn’t help that the victims we’re supposed to root for are the same ones who massacred an entire community in cold blood.

As a horror movie, The Cursed is chillingly effective. A cross between Brotherhood of the Wolf and Tim Burton’s Sleepy Hollow, Ellis’ cinematography radiates gothic horror, capturing the mood of 19th century France with creepy candlelight that barely illuminates the shadowy hallways of the Laurent manor in the middle of the night, while unsettling shadows form eerie images at every corner. The atmospheric look of the film, together with its lavish set and costume designs feel right at home in the post-The Witch world of horror, and help ground the film in history — especially when characters start talking about staying indoors to protect themselves from the horrors outside, and the health concerns of risking going outside.

In small doses, this is a strong contender for horror movie of the winter, but unfortunately, The Cursed‘s fresh take on the werewolf story is brought down by repetitive use of jump scares and horrendous CGI that doesn’t match the inventiveness of the surrounding mythology or even the practical horror of the autopsy scene. Similarly, the film could have shaken off at least 20 minutes of runtime without losing much. As it stands, the film takes a bit too long to get going, and then it takes too long to get through all the usual plot points in an underwhelming third act that stretches longer than the wolves’ bones during transformation.

The Cursed howls the arrival of a new and exciting take on the old werewolf story, with an inventive mythology and a memorable xenomorph-inspired scene that will nest in your nightmares. Sadly, the good parts of the film are trapped within the monstrous body of an overly long and average feature film. 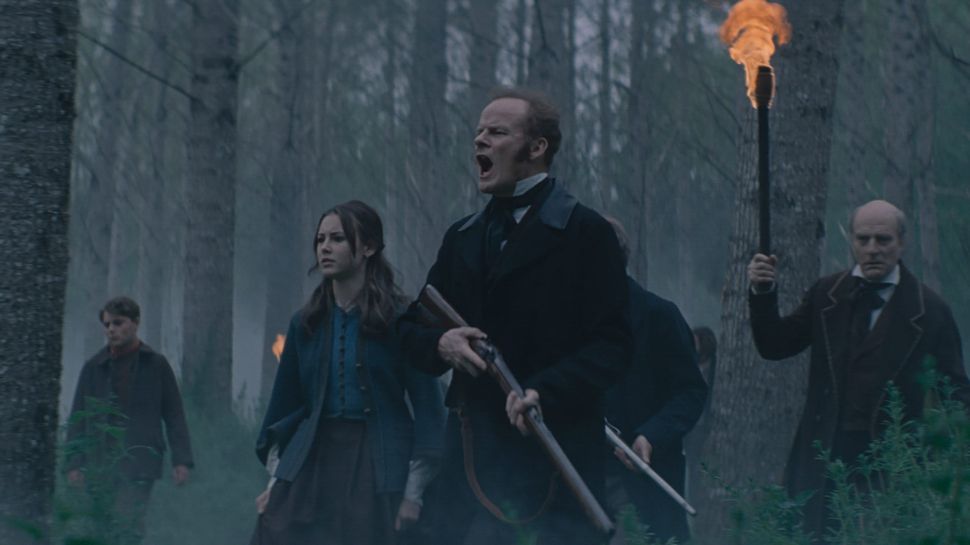