Emile Mosseri likes movie scores that stick to the ribs.

The feeling first happened as a teen after hearing Danny Elfman’s score for Edward Scissorhands. Later, he could sense how Nino Rota’s waltz from The Godfather was synonymous with the film’s themes of familial duty and regret.

As much as he was nerding out on Rota’s scores, Mosseri was still a pop-rock kid. For all the time he spent teaching himself the Scissorhands score on piano, he was also “a tie-dyed t-shirt kid who was obsessed with Jimi Hendrix,” he admits to Observer with a laugh.

Though he studied classical composition while attending Berklee College of Music in Boston, he spent his 20s touring and writing music with the Dig, a band that practiced in New York City right next door to the Strokes.

“It wasn’t until the last few years that composing took over,” Mosseri says, mentioning the differences between band and soundtrack life. “When you’re in a band, there’s all the work that goes into writing, recording and touring. The other half was performing live and trying to break through. Now, my entire musical life is writing, which is great. I’m grateful to have this medium.”

I had a blank canvas. There was no movie yet. There was just the script.

In two years, Mosseri has composed scores for The Last Black Man in San Francisco, season two of Homecoming, Kajillionaire and, most recently, Minari. A sure-fire Oscar contender and a film nominated at the 78th Golden Globe Awards this Sunday, Minari stars Steven Yeun (Burning, The Walking Dead) as the father of a Korean-American family that uproots its life to live on a farm in Arkansas.

As Minari premieres on demand today, Mosseri caught up with us to discuss his background, soundtrack work so far, and the awards chatter.

Observer: You mentioned being inspired by Danny Elfman and Nino Rota. In those examples, the music accentuates scenes in more memorable ways. When you’re composing, are you thinking about how to get the maximum emotion out of the scene or in a different way?

Emile Mosseri: The process is a little different for me each time. I usually write a bunch of music that’s inspired by the film. Sometimes, I sit down at the piano and play to picture, but I find more success cracking a scene when I write something that was maybe not intended specifically for a scene.

You try the piece in different places and capture some magic. Then, you revise, conform and have it tailored to the scene. Generally, it’s more experimentation and less, “This is the perfect music for the scene.” It’s like going fishing. You throw stuff up against picture with a director, and you see what does and doesn’t work. It’s one of the best parts of the process.

When you’re composing with a director in the room, is learning to fail a big part of that process?

Absolutely. There’s always that element of sink or swim. I had that experience with (director) Miranda July while scoring Kajillionaire. We only had five weeks to score the film. She was in the room the entire time. There was no time to bounce ideas off of each other. It was all real time. It was a terrifying experience, but one of the most rewarding and magical, too. There’s something that happens in that situation where you have to produce, and you’re working with an artist and connecting on another level.

July had tried a number of other composers before you.

Yeah, she was hitting a snag with other composers, but that actually helped. She knew what wasn’t working, which is almost as important as knowing what works. In a way, we had a leg up going into it. She was a dream to work with.

Kajillionaire, The Last Black Man in San Francisco and Minari are all personal films. Does that add a level of intimidation when it comes to scoring them?

With (The Last Black Man in San Francisco and director Joe Talbot), that was Jimmie Falls’ life, (Talbot’s) best friend’s story. There was a pressure to get it right. Jimmie had this incredible story. As a composer, you want to rise to it and honor it.

With Minari, it was (director Lee Isaac Chung’s) life on screen, in a way. There was an added element of the movie being surreal. I was sitting next to Isaac on the couch, watching the first cut of his film, realizing that this is his mother, grandmother and father that he’s depicting.

With all of these films, it takes an immense amount of bravery and vulnerability to rip your heart out and put it on the screen like that. I’ve been blessed with three films in a row that do that. That’s not lost on me how rare that is to even get to score one film like that.

Was Minari the more intimidating of the three films?

Minari was the easiest one to do because most of the music was written before they started shooting. I had written the themes and vocals to the script. Isaac had that all in hand while they were assembling the film. What was intimidating was that I had a blank canvas. There was no movie yet. There was just the script — the heart of the thing.

Did Isaac have musical references to guide you?

Issac had a more hands-off style. He knows what works emotionally. He very gently and quietly steers the ship while giving his collaborators a lot of room. But it was really empowering for me, going through it with Isaac and having that support and direction from him.

Seeing that the movie and music are working in tandem — that it’s connecting to people — that was a liberating thing for me. Now, I have more trust in myself.

Minari’s score has the added element of featuring vocal performances from Han Ye-ri (who plays Monica in the film) on original songs you wrote.

Yeah, I try to incorporate a song with each film. We got lucky with The Last Black Man in San Francisco in that we captured (singer Mike) Marshall’s performance of “If You’re Going to San Francisco,” then fleshed it out. On Kajillionaire, we recorded a version of Bobby Vinton’s “Mr. Lonely” with Angel Olsen. But this was the first time I had written something original for a film and had it translated into another language.

I sang, wrote and recorded “Rain Song,” and sent it to Isaac who then suggested that Ye-ri sing it. Stephanie Hong, another champion of the film, translated my song into this beautiful poem in Korean. Then, we built the song with Ye-ri’s vocals fairly quickly because it was all on a Sundance deadline.

It sounds like you’re able to carry that pop-rock sensibility into these scores.

That’s great to hear that’s coming through. I think every composer — whatever background they come from — is going to show up in their music. No matter the instrumentation or orchestra, you hope as a composer that your sensibilities as a writer will hopefully bleed through your work.

How does it feel to hear 40 string players play your musical idea back to you?

It’s crazy. Coming from the band world, you have band practice four-to-five nights a week to have your band sound like anything. Then, you go into this world, and these players haven’t heard or seen a note, then they play it beautifully on the spot in one take.

Do you have a filmmaker that you especially want to work with?

There are quite a few. The one off the top of my head is Derek Cianfrance (I Know This Much is True, The Place Beyond the Pines). He’s somebody that I’d love to work with. He uses music in really exciting and bold ways.

What do you think of the Oscars chatter surrounding this film?

It’s great to go through that for the first time alongside Isaac, Steven Yeun, (editor) Harry Yoon and (producer) Christina Oh. This is a lot of our first times in this situation with this kind of press.

You try to do everything you can to promote the film and celebrate the work, but you have to also constantly remind yourself how lucky you are to be this far along — how the real award is the movie connecting with people.

This interview has been edited for brevity and clarity.

Minari is now available on demand through services like Amazon Prime, Google Play and Apple. 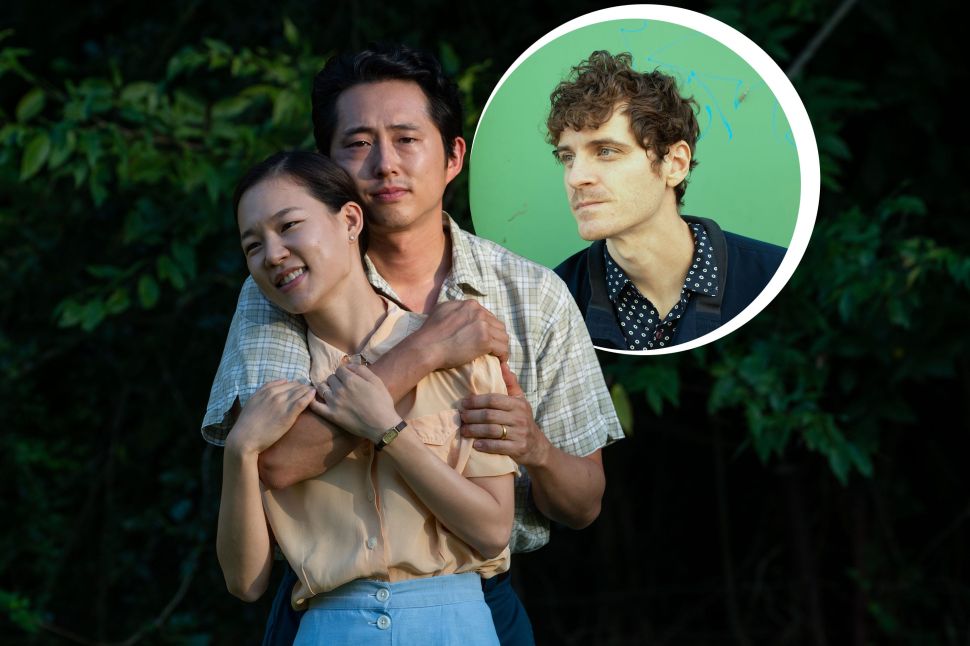