Powerful, persuasive and insightful, Falling is a sensitive and beautifully composed film that marks the formidable directing debut of the wonderful actor Viggo Mortensen. He is off to a great start. Critics keep remarking how brave he is to play a middle-aged gay man saddled with the responsibility of taking care of a monstrous, mean-spirited homophobic father dedicated to making his life a living hell. But where’s the courage of playing against type, when that’s exactly what he’s been doing for his whole career?

Falling is just another remarkable chapter in a life full of surprises. Poet, author, painter, musician, actor and man of as many disguises as Lon Chaney, Mr. Mortensen does whatever interests him. Straight artists joining the current rage of playing gay characters is nothing new. Most recently think Kate Winslet and Saoirse Ronan as sexually graphic lovers in Ammonite, or Colin Firth and Stanley Tucci as  a same-sex married senior couple facing senility and death in Supernova.

With virile, versatile Viggo, Falling is simply the latest in a string of challenges. Both brawny and brainy, he could have been a matinee idol. But from a full-frontal nude wrestling Russian mobster in Eastern Promises to an innovative father raising his children without technology, outside the parameters of normal education in Captain Fantastic, if this rangy, diverse actor has taught us anything it’s to expect the unexpected. He’s always shown more of a fascination for the aesthetics of filmmaking than the mechanics. As the star, director and screenwriter of Falling, he gets to demonstrate a vast knowledge of all three talents. It’s the challenge that intrigues him, the curiosity of dancing on the lip of the volcano that defines his art.

Reportedly based on incidents in his own family, he now plays an airline pilot named John Peterson who lives with his life partner Eric (Terry Chen) and their adopted daughter in a sunny California suburb far from the freezing temperatures in upstate New York where he and his sister Sarah (another consummate, understated and unforgettable character essay by Laura Linney) were raised. John also has a vile, chain-smoking, whiskey-guzzling, hate-spewing racist father named Willis who wastes no opportunity to insult, humiliate and inflict misery on everyone in his presence. Visiting them from the farm where he still lives—alone, rejected, and wallowing in misery—Willis is a senile, cantankerous and actually quite reprehensible old man (brilliantly played, warts and all, by Lance Henriksen). During his dreaded and disruptive stay, John goes above and beyond the call of family duty to make his father as comfortable as possible, enduring the poison Willis spreads around like spider sperm.

Flashbacks of Johnny’s childhood reveal fragments of what went wrong. As a boy, his aptitude for duck hunting, playing with snakes, and other manly pursuits were more conducive to fatherly pride, but as he matured, it became painfully obvious that Johnny’s Dad was always a bully and a brute to the whole family—making sure they spent most of their time together in tears. The years have only soured his personality. In the film’s best written sequence, when Sarah endures a punishing Sunday dinner so her children can spend an evening with their grandfather, Willis extends his hostility to Johnny’s longtime lover Eric, providing a constant irritant to everyone at the dinner table every time John calls Eric his husband, not his “boyfriend.” He even manages to denigrate his son’s seniority as a respected Air Force pilot: “Being a fairy outweighs whatever you think you’ve done to serve your country.”

The no-holds-barred writing is exemplary. In that single dinner party scene, Mr. Mortensen shows you everything you need to know, even without dialogue. I know there will be viewers who hate the father so much they will wonder why John doesn’t throw him out of the house. When years of pent-up rage finally detonate violently, the tendency to applaud will be hard to suppress. But the strength, patience and universal need to forgive and bridge generational gaps  Mr. Mortensen is aiming for have a devastating effect. This is not a movie about action; it’s about the things that make people who they really are for better or worse. With his soft-spoken voice and alert observance of human behavior, Mr. Mortensen gives the most humane performance of his colorful career, playing patience and kindness with understated balance. Mr. Henriksen matches him, mood for mood, scene by scene. Even in his most shattering moments of desperation, he doesn’t even know how to show the vaguest sense of gratitude or affection. He goes for the jugular and finds the truth.

What Viggo Mortensen strives for in movies is the realism of stillness, acting between the lines. In interviews, he has said the most important question he asks at the end of a movie is “And now what?” You’ll be asking that question a lot after the final shot in Falling. It’s one of the most honest, truthful, intelligent films in years—and one of the saddest.

Falling is available to see in theaters and on demand. 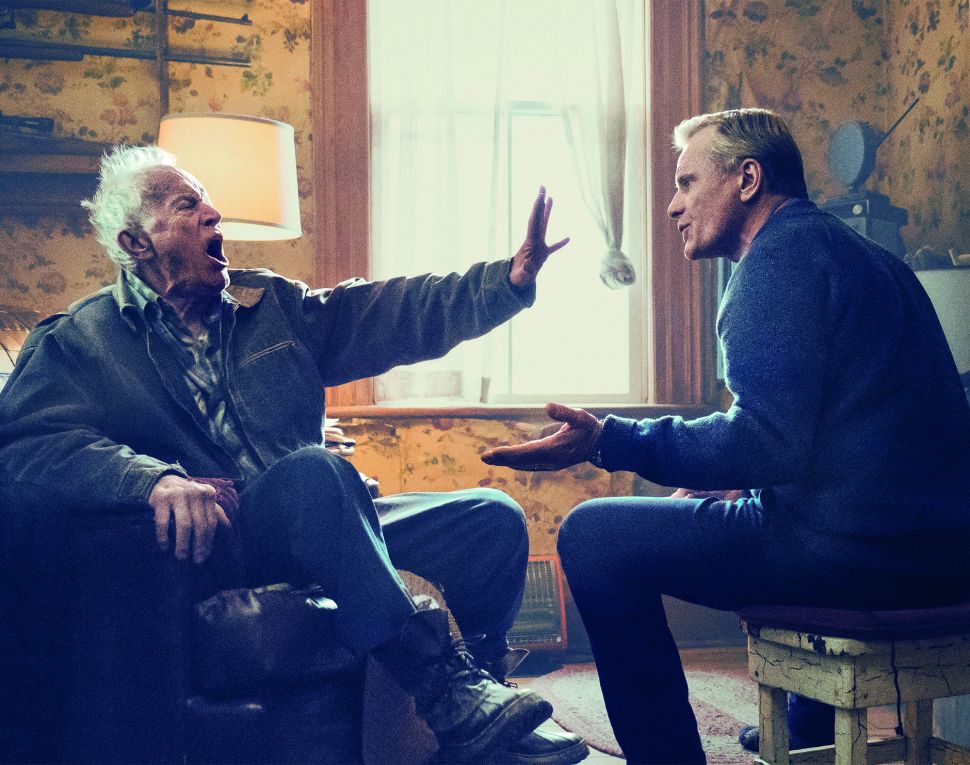