In the past, I have not been shy about heaping praise upon the remarkable soprano Anna Netrebko, but just when I say “you’ve gone hyperbolic quite enough,” the Met diva draws me in once again with her trademark mix of glamour, showmanship and sheer vocal splendor. A streaming recital from Vienna live on Saturday has just about convinced me that her singing is not just splendid, it’s a kind of superpower.

How else can I explain the effect that recital had on me? Netrebko made my modest Queens studio feel like an opera house. I burned, I pined, I very nearly perished. By the end of the 90-minute program, if I’d had a bouquet in the house I would have thrown it at the iPad.

It’s been more than a year since Netrebko last sang in New York, and less than six months ago she was hospitalized with COVID-19 related pneumonia, so it’s a particular pleasure to relate that she was in stupendous voice Saturday afternoon, with nary a scratch or a ding across two octaves of voluptuous tone.

For whatever reason (the intimate nature of the songs she programmed, or possibly the lesser demands of singing with piano instead of full orchestra), Netrebko adopted for most of the presentation a lighter vocal placement than we’ve heard from her lately. In general she sounded remarkably fresh for a soprano more than a quarter century into her career.

The recital was a slightly more intimate version of a program the soprano sang at Carnegie Hall a little over two years ago, an eclectic selection of songs about day and songs about night.  An opening gaggle of Rachmaninoff songs both established a daylit mood and provided a reminder of just how deliciously easy Netrebko sounds singing in her native Russian. Also most pleasing is the alchemy by which the singer, on the cusp of 50, transforms herself into a young girl through this music.

One of the few bumps along the way in this program was Richard Strauss’s “Morgen!” Netrebko seemed to narrow down her rich tone a bit too much here, resulting in one of the afternoon’s few examples of wayward intonation. On the other hand, her resolutely straightforward approach to this and other overly familiar art songs was refreshing.

This part of the program built quite organically, I thought, to the aria “Depuis le jour” from Charpentier’s opera Louise. Within a few measures it became apparent Netrebko could vault with confidence the piece’s many technical hurdles, so it was a delight to settle back and experience her slightly oblique emotional take on the piece. As written, the aria is a young woman’s recollection of her first romantic experience, but Netrebko’s slowish tempo and shimmering soft high notes suggested the the reminiscence was taking place later in life, with just a hint of regret seasoning the nostalgia.

Closing the “Day” portion with a “Mattinata” climaxing with skin-tingling high B’s, Netrebko launched the emotionally dark “Night” segment with mezzo-soprano Elena Maximova with a portentous duet from Tchaikovsky’s Queen of Spades.

This section was a sort of collage of the various moods of love gone wrong, most notably in “Nights of Delirium,” in which Netrebko damped down her tone into a sort of melodic moan. What she conveyed was something deeper than sorrow: this was despair.

The program played handsomely in the unlikely venue of Vienna’s Spanish Riding School, with restrained camera movement adding a touch of movement to what otherwise were quite static visuals. Netrebko was accompanied by pianist Pavel Nebolsin, who provided vibrant, opulent tone precisely correct to support her ecstatic vocalism. 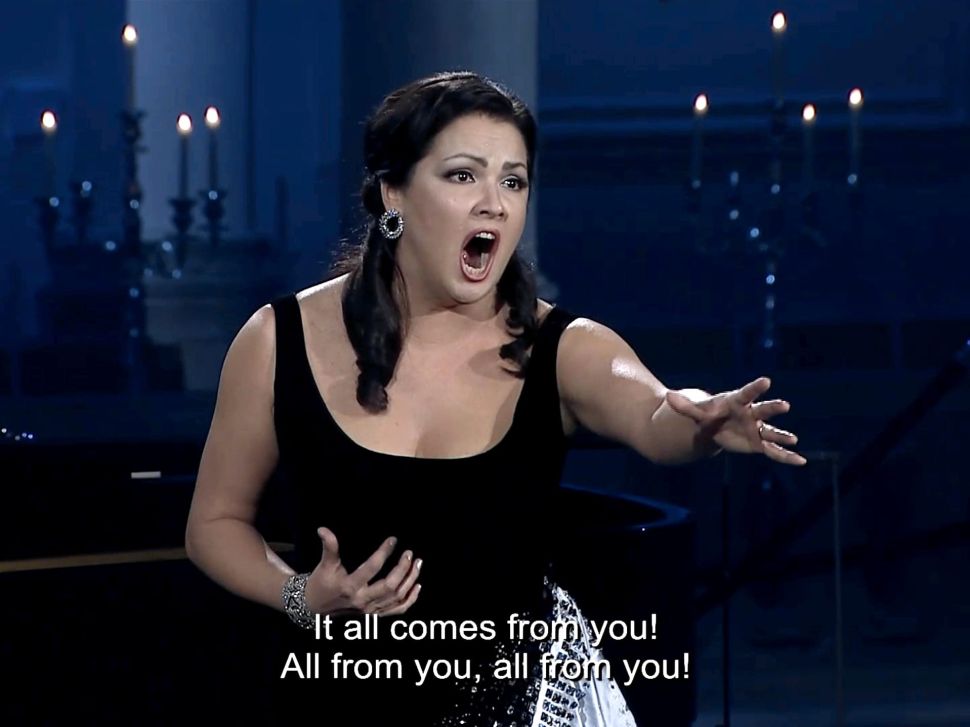