It’s a big day on Mars. After welcoming two orbiters—the United Arab Emirates‘ Hope and China’s Tianwen-1—in one week earlier this month, the Red Planet is going to see its first surface touchdown of the year Thursday by NASA’s Perseverance rover.

The space agency will broadcast Perseverance’s landing on YouTube starting at 2:15 p.m. EST. The actual touchdown is expected at approximately 3:55 p.m. EST.

The most nerve-wracking part of the rover’s landing will be a seven-minute sequence, dubbed the “seven minutes of terror” by NASA engineers, which involves supersonic parachute inflation and an autonomous guided soft landing once the spacecraft enters Mars’ thin atmosphere.

Perseverance will use the “sky crane” landing system pioneered by its predecessor, Curiosity, which involves dangling the rover from a floating platform on cables and touching down directly on the its wheels.

But Perseverance will mark several firsts for NASA as well. The rover will be the first to record its own landing with six sophisticated cameras and two microphones.

During descent, three cameras will look up at the parachute as it slows down from supersonic speeds. A fourth camera on the “sky crane” platform carrying Perseverance will keep an eye on the rover as it approaches Mars surface. And two other cameras on the rover itself will look at both the ground and the sky.

The microphones equipped on Perseverance will record audio on the Red Planet for the first time. The microphones will continue to work after touchdown and send back audio information that will engineers monitor the rover’s health.

“Having a sound of another planet is another way that we can start to realize that it feels familiar,” Nina Lanza, a member on the science team behind Perseverance’s camera-microphone system, told Space.com. “It will add a dimension that will make [Mars] more of a real place to us.”

Perseverance is designed to explore an area called Jezero crater, which scientists believe was once a lake, to search for signs of ancient life and collect rocks for a future mission to return to Earth.

“Jezero Crater is an ideal place to help answer fundamental questions about Mars,” Juliane Gross, NASA’s deputy curator of Apollo moon samples and a planetary scientist at Rutgers University, told Observer. “If we ever want to colonize Mars, we need to know what to expect before we get there—to understand its present climate, what its climate was like in the distant past, and the causes of climate change over time. Rocks and minerals, by recording the conditions and environment of their formation, can help provide the answers.”

Landing videos won’t be among the first data sent back as NASA’s science team prioritize making sure the rover is in good shape for its next assignment. The agency expects to release the landing video on February 22, four days after landing.

Another milestone to watch is the Ingenuity helicopter attached to Perseverance. Once landed, the rover will deploy the camera-equipped helicopter to explore the nearby area and identify interesting spots for the rover to visit.

Ingenuity is the first aircraft designed to fly in an extraterrestrial world.
It’ll be a Wright’s brothers moment for us,” Ingenuity’s chief engineer, Bob Balaram of the Jet Propulsion Laboratory (JPL), told Popular Science magazine earlier this month.

“I was fortunate to see Perseverance being built while lecturing at CalTech in the summer of 2019. The instrument payload is extraordinary,” Paul Falkowski, a molecular bioscientist studying the origin of life on Earth at Rutgers University, told Observer. “If its Ingenuity helicopter works, that would be an amazing engineering feat as it would allow us to observe large areas of craters in high resolution.”

Update at 4 p.m., February 18: The Perseverance rover successfully landed on Mars surface at 3:36 p.m. Thursday. The rover sent back two photos of Jezero crater taken by its front and back cameras.

And another look behind me. Welcome to Jezero Crater. #CountdownToMars pic.twitter.com/dbU3dhm6VZ 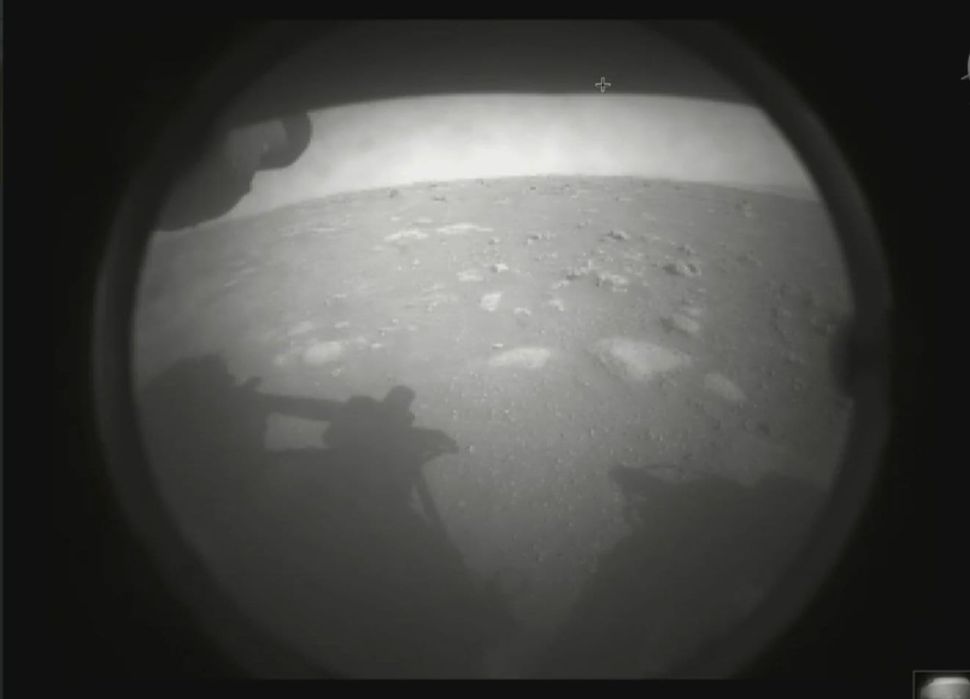